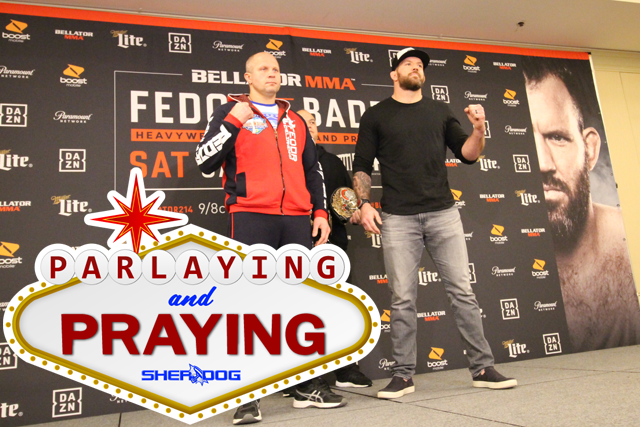 After nearly three years of its belt collecting dust, Bellator MMA will finally have a heavyweight champion. It may be arguably the greatest heavyweight ever, a 42-year-old Fedor Emelianenko, or it may be … Ryan Bader? You may never have bet on this fight ever taking place 18 months ago, but it doesn’t mean you can’t bet on it now.

The promotion on Saturday returns to The Forum in Inglewood, California, for Bellator 214, and it truly is a card with that manic Scott Coker quality. You might even call it charm. Not only will Bader, a perennial Top 10 light heavyweight who could never win The Big One in the Ultimate Fighting Championship, attempt to become a simultaneous two-division champion, but he will do so against a faded and still beloved icon Coker seems to have a pathological drive to keep on his roster. Meanwhile, we have some legitimately sharp-paired fights with wunderkind Aaron Pico taking on the underrated Henry Corrales and Juan Archuleta battling Ricky Bandejas; and for just that extra bit of Coker spice, the event features the pro MMA debuts of ex-World Wrestling Entertainment star Jake “Jack Swagger” Hager and grappling sensation A.J. Agazarm. Yeah, this is a Scott Coker card alright.

Oftentimes, that formula isn’t ideal for betting since bookmakers don’t set lines for Bellator’s plethora of undercard fights with local unknowns. Plus, the promotion’s style of matchmaking features strong and obvious favorites put in a position to shine, making it hard to profit unless you’re a soothsayer who can divine a noteworthy upset. Even so, everything is better with betting involved, and a wacky mishmash of a Scott Coker card is no different, so let’s figure out how to bet on Bellator 214:

No surprise here, other than just the fact of considering that the 35-year-old Bader is about to become a two-division champion in the second-largest MMA promotion. Obviously, if this was the Emelianenko of even just eight years ago, we’re talking about a different ball game. In fact, this being a five-round fight may have actually worked in favor of “The Last Emperor” of yesteryear, allowing him to perhaps work a patient game plan while tiring out a powerful plodder like Bader over 25 minutes.

This is 2019, though, and Emelianenko has more or less turned into a power-punching gunslinger at the same time that his ability to take a punch and recover continues to rapidly diminish. At this point, the length of the fight seems to only bolster Bader’s odds. Despite his career-long reputation for having momentary lapses in the cage that get him clobbered, that’s honestly not a major part of the Arizona native’s oeuvre now. In the last few years, his only loss was to Anthony Johnson, who hammered him with quick offense, and while Bader does deserve consternation for trying to pull guard and sweep a hitter like “Rumble,” that was a style matchup likely to go poorly for him anyway. Bader has grown much more measured and tactical in his approach, especially in the standup, and become a legitimate two-handed puncher with a sneaky good array of lead left hands. He has also proven to be much more efficient with his wrestling attack.

Unfortunately for Emelianenko, this is a catch-22 situation: If he comes out bombing with hooking combos, which is really his only way to pull off the upset, he’s likely to just get clipped by Bader quickly or tire himself out. If he works patiently from the outside and tries to kickbox around the former Arizona State University Sun Devil, he has to try to run out the clock while winning rounds from a fresher, sturdier fighter who can also change the venue of the fight with his wrestling. All that adds up some misty eyes for the “Pride never die!” crowd.

Don’t get me wrong: Pico has already shown more than enough skill and ability to atone for his infamous gaffe in his pro debut against Zach Freeman, and he is going to continue to emerge as a featherweight contender in short order. Me listing Pico here is a largely a function of his being the biggest favorite on the card and the aforementioned lack of odds being offered. Why bother risking it at -500?

More than that, it’s still just the 22-year-old Pico’s sixth pro fight, and it comes against the best fighter he has faced to date. Last time out, Pico did an impressive job by blowing out a quality veteran in Leandro Higo, but his challenge is more daunting against the scrappy Corales, who is physically larger than Higo and much more suited to 145 pounds. Let us not forget, debut jitters or not, Pico was actually badly rocked by Freeman prior to giving up the fight-ending guillotine choke, so we already know he can be clipped and hurt, especially by a well-heeled, diverse striker like Corrales.

With that said, for all his improvement since he linked arms with the "Bang" Ludwig and the Treigning Lab, Corrales is still a fighter who relies on constant pressure in the standup and on top. It’s hard to imagine him having a ton of success with his chopping low kicks, lest he give Pico the chance to shoot for takedowns should he choose to do so. Once again, this is not a vote of no confidence against Pico but a consideration of price, his still being so young in the game and the fact that Corrales is a rugged customer and easily the best fighter Pico has faced. At -500, it’s just not worth the play.

Bader Wins Inside the Distance (-185)

Because of Emelianenko’s aged and dilapidated state and Bader’s reduced tendency over the last few years to expose himself by jumping headlong into the pocket -- and his considerable two-handed punching power -- “Darth” should be able to utilize the 25-minute bout length to eventually get “The Last Emperor” out of the cage.

Initially, I was tempted by the prop on the fight going to decision at +440, just in case Bader was overly passive and judicious in his attack, fearing sudden barrages of powerful hooks from the Russian, but the more I consider where both fighters are at and how they have looked in recent performances, I feel much more comfortable here, and really, -185 isn’t a bad prop. More than that, it would wrong to simply size up this fight as a 25-minute kickboxing match in which one fighter is looking to clip the other. Bader still is a potent wrestler with great riding ability. In a longer fight like this, it’s possible that with Emelianenko’s tendency to welt, cut and swell Bader could even get the doctor into the cage to seal the deal for him.

It’s far from the tastiest prop bet you’ll ever see, but on this card, it’s as good as we’re going to do with the paucity of options.

Archuleta-Bandejas Does Not Go to Decision (+150)

If you have seen Archuleta’s recent transformation from wrestler into a high-flying, up-tempo striker, along with the aggressive Bandejas spoiling Conor McGregor’s boy, James Gallagher, with an uppercut and side thrust kick to the chin, I can see how you could be seduced by an actual plus-line on a card that’s so heavy on clear-cut favorites. I’m not saying it’s impossible, as these two once-beaten fighters really both offer some relentless technical striking, but I would caution against talking yourself into a prop like this out of listlessness.

I fully expect Archuleta to pump his jab, look to his pressuring uppercuts and bring his flying knees and banana kicks behind them. Since improving his striking, that’s just the fighter into which he has morphed. Bandejas is going to respond in kind with his rangy punching combos, but I think that’s part of why, even with two dynamic offensive talents, we could be bound to go the full 15 minutes.

Neither fighter has really been rocked in his pro career to any notable extent, and more than that, Archuleta came into this sport as a wrestler. Despite finding his striking ability and creativity lately, even his recent fights feature him getting to his opponents’ bodies and dragging them down with outside trips. Given that Archuleta is coming down in weight for this fight and is the naturally larger man, I can see Bandejas getting in his own licks early, with both fighters in attack mode, before Archuleta changes tack and looks to work more of a hybrid wrestle-boxing game. I think that makes it more than likely we are going the distance.

With sportsbooks only offering bets on four fights and all of those fights having clear and stern favorites, a classic three-team parlay here is a simple matter of subtraction. With Pico being -500 to Hager’s -400 for his pro debut, it makes this one much easier -- unless you’re calling the Emelianenko upset.

I have already made the case for Bader twice. As for Archuleta, though I cautioned that he may struggle to get the finish against a fellow hot-handed and aggressive striker like Bandejas, it’s still a possibility, especially as the harder puncher with the more diverse and unpredictable offense. More importantly, his strength and wrestling ability in the clinch -- the very reason I cautioned against picking the Bandejas fight to get finished -- gives him more ways to win. Considering his -240 is the best line for a favorite on the card, he’s a must here.

That brings us to Hager. There’s a long history of professional wrestlers jumping into MMA and not impressing right out of the gate. That goes for amateur wrestlers, too. I remember seeing Daniel Cormier’s awkward MMA debut in Strikeforce and thinking, “Sheesh, this guy is going to be a champion?” In these cases, though, athleticism and pedigree do matter. Hager is still a 6-foot-5, 265-pound athlete who wrestled at the University of Oklahoma, earning All-American status in 2006. Competition also matters. Hager’s opponent, J.W. Kiser, is just 1-1 as a pro after racking up a ho-hum 10-8 mark as an amateur against local yokel heavyweights in the Midwest. In every single one of his losses, amateur or pro, he has been finished via strikes in less than 10 minutes. We’ll see what kind of natural aptitude Hager possesses, but it should easily carry him to a stoppage win here.
« Previous Fight Odds Prime Picks: Bellator 214 Next Fight Odds Beating the Books: Bellator 214 »