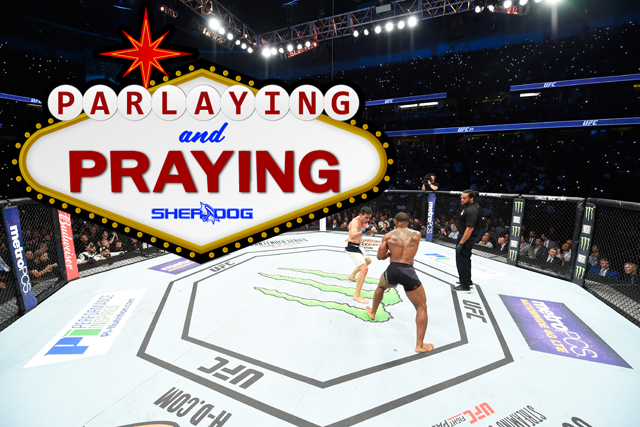 This Saturday night in Dallas, UFC 228 touches down at the American Airlines Center, the Ultimate Fighting Championship’s second 14-fight card of 2018. With over a baker’s dozen fights, there’s certainly plenty to bet on, including a championship doubleheader at the top of the bill. One of those title fights is a pick ‘em. The other one, ehhh, not so much.

Yes, the Tyron Woodley-Darren Till and Nicco Montano-Valentina Shevchenko co-headliners are a tale of two vastly disparate betting lines to say the absolute minimum. As of this writing, Woodley and Till are at even odds on the majority of sportsbooks, with a few of them even offering the welterweight challenger Till as a slight -120 favorite. Meanwhile, Shevchenko, who is seeking the women’s flyweight crown, is anywhere from -1300 to a staggering -1700. This makes “Bullet” the biggest favorite at a UFC challenger in history, far surpassing Georges St. Pierre in his UFC 83 rematch with Matt Serra, who closed just over -500.

They say everything is bigger in Texas. Well, let’s figure out how the Octagon’s latest appearance in the Lone Star State can beef up your wallet -- and avoid going broke -- with some straight picks, prop bets and parlay suggestions for UFC 228:

Now, allow me to preface this by saying that Woodley to retain, straight up, is neck-and-neck with Aljamain Sterling at -140 against Cody Stamann. However, my choosing here of Woodley has a few reasons behind it: one, Till has turned to a favorite recently on some books due to fight week money coming in on him; two, Sterling’s boxing is still underdeveloped and Stamann is a rock-solid wrestleboxer who continues to surprise, impress and improve in each UFC outing; and three, people are more excited about the main event, so you gotta give readers what they want.

Now, obviously, the enormous and dynamic Till has a great chance against Woodley, who hasn’t fought in 13 months and is returning from shoulder surgery. However, Woodley has vastly more experience in 25-minute bouts and is masterful at dictating the pace and tempo of his fights, especially relevant here since Till often lets his opponents choose how and at what speed fights take place, alternating between staying on his bicycle, then rushing his opponents with heavy artillery. More than that, Woodley has extensive experience against southpaws; Till will be his sixth lefty in a row and Woodley has a knack for landing the right-hand counters that have rattled The Gorilla’s cage before.

While Till has some nasty strikes in tight and is an above-average defensive wrestler (83 percent takedown defense), in close quarters, he spends an awful lot of time letting his opponent run him into the cage and pin his back to the fence. Woodley is still the far better wrestler and is a bull in the clinch. On top of all that, while Till got better late against Stephen Thompson and the fifth round was his best, he didn’t actually have to make 170 pounds on that occasion. If this is a title fight, Woodley going back to his bullying style could take the wind out of the Brit’s sails.

I get the rationale here. I’ve seen many bettors express a lot of interest in this pick and not to slight White, it has nothing to do with his skill or ability. No, people are hot on this line because he’s facing a completely shopworn Diego Sanchez, who has been knocked out in each of his last two fights.

For me, I’m passing on this puppy because of the wild uncertainty on both sides. Sure, White is a massive, 6-foot-2 welterweight and Sanchez’s once-granite chin is rapidly crumbling. He’s got some flashy kicking offense, owing to his tae kwon do background. Despite that, he is not a home run hitter; nine of his 14 career wins are by submission, his real bread and butter. More suspect, on his way up through the U.K. MMA circuit, he became known for winding up on his back and covered in blood before eventually cinching up a sub.

Yes, Sanchez is overdue to hang his gloves up, but White’s striking skill and power are a far cry from Matt Brown and Al Iaquinta, who rocked Sanchez’s world recently. If Sanchez opts to work his own grappling -- a dubious notion, I know -- this fight is very manageable. Even if he doesn’t, White remains very hittable on the feet himself and “The Nightmare” can still land some surprising volleys of punches. Given how little defense White has and especially considering Sanchez’s long-running history of swaying judges with his breakneck style -- and at only -230 -- I’m comfortable giving this line a hard pass in favor of some juicier lines.

Valentina Shevchenko Wins Inside the Distance (-150)

Despite beating a very respectable crop of talent through “The Ultimate Fighter 26” to become the inaugural UFC women’s flyweight champ, there’s a reason Nicco Montano is such an ungodly underdog in this fight. She’s tough as nails, but completely out of her depth here against a woman who bests her in every department in a five-round fight.

My preference for this prop is about the differential between Shevchenko straight up between -1300 and -1700 versus how enticing the -150 stoppage prop is. Shevchenko tends to start slow, but Montano’s basic punching should get her chewed up against Bullet’s classy, technical muay Thai attack. More importantly, I look at how Roxanne Modafferi had key moments of success with clinch takedowns and top position pounding in their “TUF 26” Finale bout. Shevchenko is a monster in the clinch, with a wide array of trips, reaps and foot sweeps and once on top, she should be able to batter Montano and halt her within 25 minutes.

Shevchenko can be a slow starter, but once she gains an advantage, she’s like a snowball rolling downhill. If she goes to the ground early and often against Montano, who has faced no one remotely of her skill level before, either a TKO or a submission is very likely, making this prop a slam dunk. Montano has much untapped potential, but Saturday night could see her simply being tapped.

This one is informed by the same sentiment that gives me pause with White-Sanchez. The 35-year-old Jim Miller has lost four straight bouts and suffered a nasty knockout in April against Dan Hooker. In the same way that many are comfortable taking Craig White outright simply because Sanchez is so faded, I’ve seen some folks, even sharps, willing to take a gamble on Alex White having the tools to make it five straight losses for Miller.

Again, the question here isn’t whether or not White is going to win, it’s whether he knocks Miller out. However, I think Miller at +130 is an interesting underdog in the bout, even as a straight pick. Miller is certainly in the twilight of his career, but the longtime fringe contender has only ever been stopped via strikes twice in 41 pro fights and though he’s not a defensive specialist standing, can crack back with his big left hand. Plus, White hardly has the length, reach and striking acumen of Hooker or Donald Cerrone, who knocked Miller out previously.

Most importantly, even if he’s lost a step physically, Miller is still the far better grappler here and lesser wrestlers like Tony Martin, Clay Collard and James Krause took White down liberally, passed guard and threatened him via submission. Miller has a real shot to exploit White’s grappling here and bare minimum, should avoid getting clocked for the second time in a row.

I mentioned off the top all the reasons I like Woodley to retain his welterweight throne in the main event, but at the end of the day, I am still most confident of “The Chosen One” getting his hand raised of any even fighter or underdog other than Sterling, so he’s a must here. As for Sterling, I previously detailed why I think he’s a solid bet, but prefer Woodley as the big money bet at UFC 228, largely due to how tough opponent Cody Stamann is because his consistent improvement and strong boxing and wrestling skills that could frustrate Sterling.

Now, that said, I think Sterling could be an even bigger favorite here, if modestly so. The Funkmaster’s biggest problem is that he doesn’t work much of a jab standing and struggles to string punches together; he simply can’t easily sprawl and brawl and dominate a fight with his hands. The Serra-Longo rep makes up for it with two other skills though: his herky-jerky kicking and strong, scramble-oriented wrestling. In Stamann’s last win, which he arguably should have lost to Bryan Caraway, he succeeded because Caraway fought him from such long range and couldn’t close the distance well with less effective punches. Sterling is more likely to tie Stamann up and take dominant positions with his more unorthodox, athletic striking attacks.

As for Charles Byrd, who takes on Darren Stewart, his style can be sloppy and disjointed at times, but Stewart has shown massive gaps in his submission defense and transitions, where Byrd really excels. Stewart has been tapped by Karl Roberson and Julian Marquez in two of his last three UFC outings, two fighters less explosive and with less submission-finishing acumen than Byrd. If you’re not feeling so adventurous, though, you can finish your three-team parlay with Jessica Andrade at -450, though that brings your combined odds to +292.

We are a participant in the Amazon Services LLC Associates Program, an affiliate advertising program designed to provide a means for us to earn fees by linking to Amazon.com and affiliated sites.
« Previous Fight Odds Prime Picks: UFC 228 ‘Woodley vs. Till’ Next Fight Odds Beating the Books: UFC 228 »