Well, the end is finally upon us. Nearly a year after it launched to considerable fanfare, Bellator MMA’s heavyweight grand prix wraps up Saturday, and by the end of the evening, either Fedor Emelianenko or Ryan Bader will have a new belt around his waist.

As the living legend and the light heavyweight upstart prepare to square off, it’s worth taking a moment to look back at the road that brought us here. Unlike its welterweight counterpart, which was stacked with solid veterans as well as red-hot prospects -- it featured three undefeated fighters out of an eight-man field -- the heavyweight bracket was full of familiar faces. Too familiar, in some cases: Six of the entrants were Ultimate Fighting Championship veterans and five are on the wrong side of their 40th birthday. Most problematically, none were top-10 heavyweights at the time the tourney launched, though whoever wins Saturday is worthy of consideration.

Fans who raised an eyebrow at the selection raised both eyebrows when the bracket was revealed. The four biggest-name fighters in the field were crowded onto one side of the bracket and more specifically, the two most historically-accomplished heavyweights, Emelianenko and Frank Mir, were paired in the opening round, as were the two most outsized personalities, in the form of the voluble Quinton Jackson and Chael Sonnen. One of the opening-round pairings on the other side, Roy Nelson vs. Matt Mitrione, was a rerun of a six-year old UFC matchup, something that could have been avoided with almost any other combination of fighters.

If the tournament did not promise much in the way of divisional relevance, it would need to deliver on entertainment, and in that regard, the curious matchmaking actually helped. Of all the matches so far in the tournament, the only complete dud was the aforementioned Mitrione-Nelson fight. There have not been many close fights, but there has been no shortage of jump-off-the-couch fireworks -- Bader’s sparking of Muhammed Lawal was an eye-opener, while Emelianenko’s victories over Mir and Sonnen managed to provide moments of drama and even peril for “The Last Emperor” in spite of their brevity.

In the end, the Bellator HWGP has been one wild and enjoyable ride, and Emelianenko himself, a veteran of the legendary tournaments put on by Pride Fighting Championships and Strikeforce, is on record as saying that this one is as good as any he’s taken part in. Whoever emerges victorious on Saturday night, hats off to Bellator for bringing the old-school pageantry and drama of the grand prix to mixed martial arts. 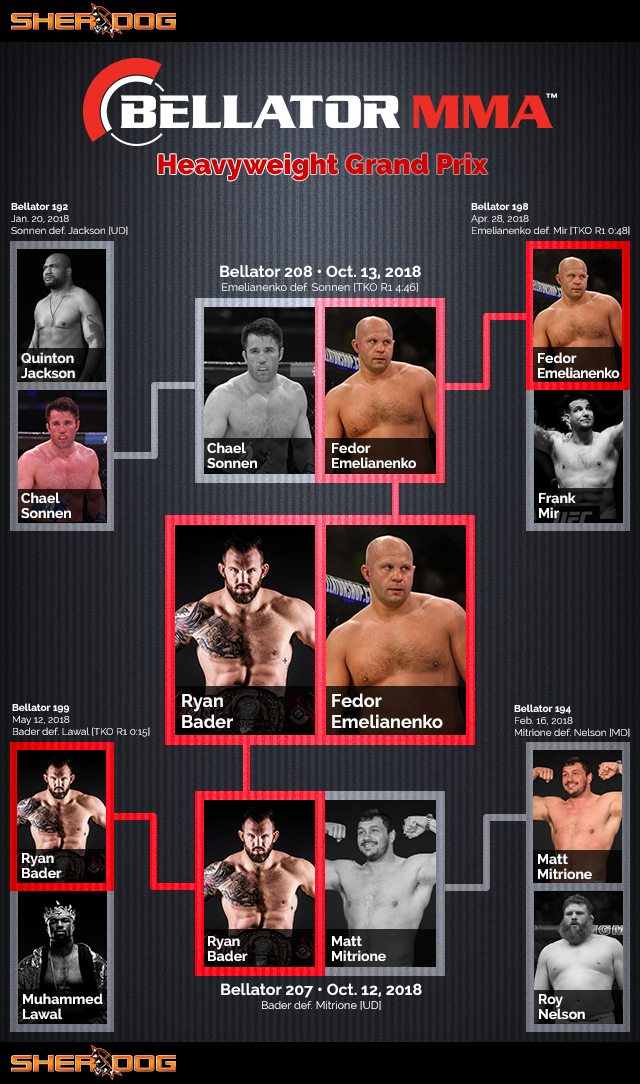