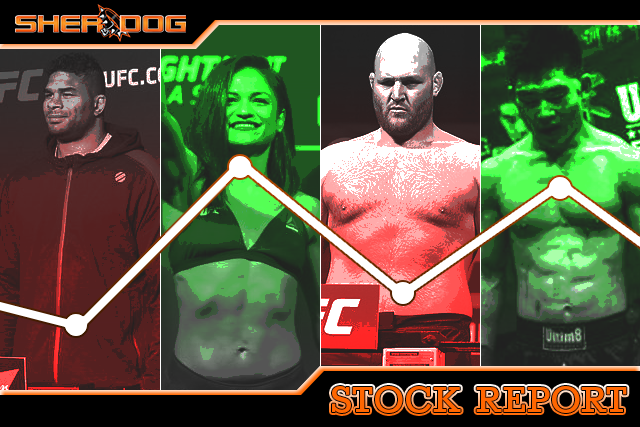 
The Ultimate Fighting Championship on Saturday finds its way back to Washington D.C., with UFC on ESPN 7 at the Capitol One Arena. Stakes are high across the board.

WHO HAS THE MOST TO GAIN?


Jairzinho Rozenstruik: Since he arrived in the UFC in February, Rozenstruik has made a name for himself with three straight knockout wins, the run earning him a main event assignment and a golden opportunity against his first ranked opponent in Alistair Overeem. What does Rozenstruik bring to the table? Power from all angles. Whether it be a jab or a full-force overhand right, “Bigi Boy” can shut the lights out and that is a worrying thought considering Overeem’s questionable chin. “The Demolition Man” will have to remain composed with his head on a swivel for five rounds, because with a striker like Rozenstruik standing across from you, it only takes one shot to ruin your night. As it stands, Rozenstruik only has nine professional bouts to his name, but a win over Overeem would put him on the map in a serious way and another finish could very well land him in range of the heavyweight division’s Top 5.

Cynthia Calvillo: The 32-year-old Calvillo went back to the drawing board following her first career loss and since then has picked up back-to-back wins. Now, she looks to break into the strawweight division’s elite at the expense of Marina Rodriguez -- an undefeated Brazilian striker who does not figure to go down without a considerable fight. The key to victory for Calvillo in this fight? Utilize her aggressive grappling game to continuously stick her opponent on the mat, where she is much less comfortable. Rodriguez is a rangy striker, and if Calvillo can work her way inside early and often, she stands a much better shot at taking the zero away from her opponent’s win-loss ledger. A victory puts Calvillo in position for a Top 5 opponent in a division in need of young and hungry contenders for Weili Zhang’s strawweight crown. The UFC has shown in the past that Calvillo is a fighter it is willing to put a promotional push behind, and a win here would justify that decision.

Yadong Song: Standing at a perfect 4-0 record since signing with the UFC, Song gets his first shot at Top 10 opposition when he steps into the cage to take on Cody Stamann to open the main card. Song’s training with Team Alpha Male has been a major boost to his career, and at just 22 years of age, “The Kung Fu Monkey” is already being considered by some as the next big thing in the bantamweight division. In Song’s last fight against Alejandro Perez, fans were treated to a near flawless striking performance that ended with a brutal counterpunch knockout. Fight by fight, Song’s confidence seems to grow as he spends more time in the Octagon. Expect the young Chinese striker to come out aggressively, looking to put away Stamann early and stamp his ticket into the division’s Top 10.

WHO HAS THE MOST TO LOSE?


Alistair Overeem: Closing in on 40 years of age, Overeem has shown no signs of slowing down all that much; and on the heels of back-to-back knockout wins, the Dutch striking specialist is looking to work his way back toward a second UFC heavyweight title shot. This fight against Rozenstruik was a risky one to accept. Although his opponent is undefeated, he has but three UFC bouts to his name and only nine in total. On top of this, Rozenstruik comes with a No. 14 ranking, whereas Overeem currently stands at No. 6. Despite the risk involved, a third consecutive win could put Overeem in a favorable position in the heavyweight division as we roll into 2020. The former Strikeforce champion would be wise to avoid Rozenstruik’s devastating power, adopting a game plan similar to what he employed in his win over Junior dos Santos, with plenty of movement and plenty of jabs while he looks to set up a fight-ending sequence. Overeem’s experience will be his greatest ally in what will be his fifth UFC main event.

Ben Rothwell: It has been tough sledding for Rothwell of late. Between a lengthy suspension and a three-fight losing streak, the near decade-long UFC veteran could be in serious danger of being handed a pink slip with a fourth consecutive defeat. Rothwell has looked every bit of his 38 years in his last few bouts, and his slow, plodding striking attack simply has not been enough to get it done in today’s heavyweight division. In order for Rothwell to keep his place on the UFC roster, he will have to turn back the clock against a fellow veteran in Stefan Struve. Rothwell’s best chance at victory is to look to exploit Struve’s suspect durability and land a heavy shot early in the bout. Struve has not fought since his short-lived retirement bout in February, and “Big Ben” stands a good chance at catching him off-guard as he looks to shake off the cobwebs.

Aspen Ladd: A year ago, Ladd was being touted as future contender, but following a lightning-quick defeat to Germaine de Randamie, she now looks to regain some of the momentum she lost as she works her way back toward the top of the bantamweight division. Ladd’s biggest asset in this bout will be her tenacious, bully-like striking style, and she will almost certainly look to get in close on her opponent early in the bout, at which point she can work for a takedown into her bread and butter: ground-and-pound. If Ladd manages to establish herself as the more physically dominating fighter, then she stands a good chance of getting back in the winning column. However, a second straight defeat to a proven veteran in Yana Kunitskaya could see Ladd fall further down the ladder and well out of reach of title contention.