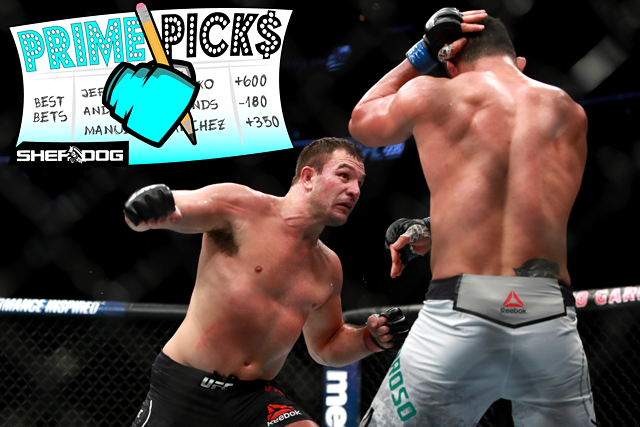 Gian Villante has some advantages against Ed Herman that cannot be overlooked. Photo: Mike Lawrie/Getty Images


The Ultimate Fighting Championship on Saturday will make its debut in Moncton, New Brunswick, with UFC Fight Night 138 at the Moncton Events Centre. The show may be short on star power but makes up for it with some interesting matches, many of which feature local Canadian fighters. The oddsmakers have released their lines. Here are some of my favorite plays to consider in this installment of “Prime Picks.”


For a straight bet, I like Strickland to defeat Nordine Taleb in their welterweight contest. Strickland has several advantages. First and foremost, at 27, he is the younger fighter. Taleb is 37, and that 10-year age gap cannot be ignored. Strickland is also a former middleweight, so he should have a size advantage and an edge in reach in this bout. Taleb is an excellent striker, but Strickland is no slouch in the standup department. Where I think Strickland has the biggest advantage is on the ground. We have seen his deadly ground game in the UFC before in his submission win over Bubba McDaniel. Meanwhile, Taleb has never won a fight by submission and was upset by a Claudio Henrique da Silva rear-naked choke in his last fight. Taleb has the knockout power to make the fight interesting, but I just feel like Strickland has too many physical advantages to ignore, and he’s the more well-rounded fighter. At -115 odds, give me Strickland for a straight play in this one.


Another fighter I like for a straight play is Ray, who fights Jessin Ayari in a lightweight pairing. As disappointing as Ray has been his last few fights, I still think he is a solid fighter at 155 pounds, and this fight is a good matchup for him. Ray’s 5-3 record in the Octagon has him in good standing, and he showed off some legitimate knockout power earlier in his UFC run. Though some bettors swore against betting on him again after he lost to Kajan Johnson as the favorite in his last fight, matchups are everything, and I think the UFC matchmakers have given him a winnable fight here. Ayari has not fought since a decision loss to Darren Till in a welterweight clash well over a year ago, and he is only 1-1 in the UFC. Ayari has not been active at all, having only fought twice in the UFC since he debuted back in 2016. Plus, he was knocked out a couple of times earlier in his career on the regional circuit. I just do not see a realistic path to victory for Ayari here, as Ray has cleaned up his ground game since coming to the UFC. On the other hand, I believe Ray could win by knockout or grind out a decision. On a card that has a lot of big favorites, Ray at -150 looks to be a relatively safe line for those who prefer straight bets.


For the parlay players, one fighter who I think wins his matchup is Villante, as he takes on Ed Herman in a light heavyweight bout. This is more of a fade on the veteran Herman, who I do not think has much left in the tank, but Villante has some advantages in this fight that cannot be overlooked. For starters, Villante is 33, and Herman is 38. Herman has had a longer career and has taken a ton of damage throughout his UFC tenure, which dates back to his Octagon debut in 2006 on the heels of the third season of “The Ultimate Fighter.” If you look at most of the other fighters who competed in the early iterations of the reality series, many of them are long retired or have stuck around so long that they are getting knocked out on a regular basis. Herman is another example, as he has been brutally stopped in two of his last four fights after only one TKO loss in his first 33 professional appearances. I just do not trust Herman’s chin at this point and especially at light heavyweight, where he is undersized for the division. Villante has not exactly set the world on fire and his chin is also a concern, but for the most part, he has been in competitive fights. I just think Herman is all but done as a UFC-level fighter at this point, and I think Villante can finish him within the three rounds. The -280 line is a big number, but for the parlay bettors, he is certainly someone to think about betting on.


I always like to take an underdog, and I have my eyes on Golm to upset Arjan Singh Bhullar. Golm is only 26, and before dropping a hard-fought decision to Timothy Johnson in his last fight, he had won all six of his pro bouts by stoppage, including a vicious submission win over Christian Colombo in his UFC debut. Golm is a young, improving fighter with serious finishing skills; and in a heavyweight division that needs prospects, he is someone who could climb the ladder with a few more wins. Across from him is Bhullar, the standout Indian-Canadian wrestler who is 1-1 so far in the UFC. Like Golm, the 32-year-old Bhullar had won all of his pro fights up until his last outing, where he was submitted via omoplata by Adam Wieczorek. I am concerned anytime someone taps to an omoplata at this level of the sport, and it makes for a big red flag that has me wanting to bet against Bhullar in this spot. Golm is the younger fighter, has better striking skills and appears to be more durable. Bhullar has the wrestling advantage, but that did not help him in his last fight. Give me Golm for the upset, and I think he can finish Bhullar. I will take the +175 odds on the younger, more powerful fighter in a heavyweight bout all day.

Adam Martin is a mixed martial arts journalist who has been covering the sport since 2011. He is currently the lead odds analyst for Sherdog.com as well as the lead staff writer for MMAOddsbreaker.com. Adam is also the co-host of “The Parting Shot Podcast” on iTunes. His favorite fight of all-time is Dan Henderson vs. Mauricio Rua and he wishes Pride Fighting Championships never died. Adam is based out of Toronto, and he is a graduate of the University of Toronto and Centennial College. Get in touch with him on Twitter @MMAdamMartin.
« Previous Fight Odds The Insane Prop Bets of Bellator 207 & Bellator 208 Next Fight Odds Parlaying and Praying: UFC Fight Night 138 »