The Ultimate Fighting Championship returns to Great Britain for UFC 120 “Bisping vs. Akiyama” on Saturday at the O2 Arena in London, which should be packed to the gills with rabid English mixed martial arts fans.

Their beloved Michael Bisping will square off with Yoshihiro Akiyama in the main event, but much of the attention surrounding the show has gone to the co-headliner between Dan Hardy and Carlos Condit. Will Hardy’s power prove too much for Condit to handle, or will the former World Extreme Cagefighting champion’s arsenal bring down the popular British banger?

Jaime Fletcher: Wow, I didn’t even know this was going down. Hardy showed heart and toughness against Georges St. Pierre. Condit takes more risks than GSP, though. This leads me to believe that he will have more opportunities to finish the fight. However, this leaves him in danger of being put to sleep because we all know Hardy’s hands are those weapons we couldn’t find in Iraq. I’m gonna go with Condit reppin’ North America against them Brits in a three-round barn burner or Condit with a late Anderson Silvaesque submission.

Ron Foster: I expect a great stand-up war early. Condit is a much more technical striker and also has a better ground game. Hardy has a ton of heart, and his will is not easily broken. Condit will outstrike Hardy on the feet and use his superior grappling to pick up the W in a very close and entertaining three-round war. Condit by unanimous decision.

Robin Black: I do like Dan Hardy, but there is something about him that makes me think that he wouldn’t actually want a red Mohawk; he just has it because it helps with his marketability. So I’m going with Carlos Condit by third-round ground-and-pound TKO. It’s science.

Scott Epstein: Carlos won’t be able to handle Dan’s strengths and won’t monopolize on Dan’s weaknesses. I like Carlos, but I love Dan.

Michael Guymon: I think Hardy’s striking is more polished, and Condit won’t have the necessary wrestling to take Dan down. I see Condit trying to bang and getting KO’d in second. 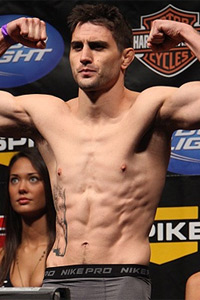 File Photo
The pros favor Carlos Condit.
Kultar Gill: As good as a fighter Condit is, “The Outlaw” will be too much for him. Condit might try to stand with Dan but lose in the striking and won’t be able to take Dan down. I predict a third-round stoppage by Dan Hardy.

Tom Gavrilos: Carlos is too crafty and too fast, finishes what GSP started and ends the night with a sub.

Benji Radach: This is the classic matchup, with the striker and grappler. Who can impose their will first? I like Hardy’s momentum so I’m gonna pick him by TKO. We all know Condit can pull this off, as well. If it goes to the floor, it’s gonna be a tough night for Hardy, though.

Mike Ciesnolevicz: I’m pretty sure 99 percent of the planet wants Carlos Condit to win this fight, and I think he will. Hardy is probably the only guy hated almost as much as Bisping. Condit is more well-rounded than Hardy. I can’t see Hardy knocking him out or submitting him. Hardy likely won’t outwrestle anyone, either. Pretty easy choice here in my eyes; Condit wins by choke. It doesn’t matter that Hardy won’t tap to joint locks because chokes put you to sleep.

Billy MacDonald: I have become a big Dan Hardy fan thanks to his last few performances. Even in his loss to GSP, he showed tremendous heart and determination. That being said, I am still calling for the upset and think that Condit simply will look to take down Hardy in the early going and mix in the ground-and-pound and submission game. Ultimately, I see Condit finishing off the fight late in the first or early in the second round via TKO.

Stephane Vigneault: Condit by decision. It’s a fight I can't wait to see, and I think Condit is more well-rounded. Condit over Hardy by split decision.

Josh Thomson: Well, since I just beat the guy who beat both of them, I don’t care. I just want to see a good fight, but since I have to make a choice, I’m gonna go with Condit via submission.

Martin Kampmann: I got Condit winning by submission.