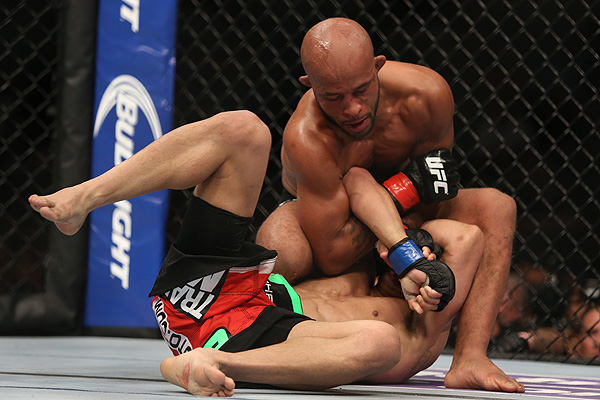 
No one has questions as to the identity of MMA’s premier 125-pound fighter.

Demetrious Johnson will defend his Ultimate Fighting Championship flyweight crown against Ali Bagautinov in the UFC 174 main event on Saturday at Rogers Arena in Vancouver, British Columbia, Canada. Regarded by some as the most technical fighter in the sport at any weights, the diminutive but dynamic champion still has never lost a fight at 125 pounds.

“Mighty Mouse” will enter his latest title defense on the strength of a five-fight winning streak, which includes victories over Team Alpha Male’s Joseph Benavidez (twice), John Moraga and “The Ultimate Fighter” Season 14 winner John Dodson. Johnson last fought at UFC on Fox 9 in December, when he knocked out Benavidez a little more than two minutes into their rematch.

Bagautinov will carry an 11-fight winning streak into the cage. The two-time combat sambo world champion cemented his place as the No. 1 contender at 125 pounds at UFC 169 in February, when he took a unanimous decision from brick-fisted Brazilian John Lineker.

Sherdog.com touched base with a number of professional fighters and trainers to gauge their opinions on the UFC 174 headliner:

Javier Vazquez: It’s all Johnson. He is the best guy in the division, and he is getting better. This should be a dominant performance. I’m guessing he wins in a dominant five-round decision.

Gabe Ruediger: I hate to say it, but I had to look Ali up on the Sherdog Fight Finder because I had no idea who he was, so, sadly, I am unable to give a prediction on this fight. I’m sure it’s going to be fun to watch for those who are watching, though.

Ricardo Liborio: Amazing challenge for Demetrious. I think the Russian will bring it, but it will not be enough. “Mighty Mouse” wins by decision.

Louis Gaudinot: Demetrious grinds this one out. He might get the late finish if Ali tires out.

Ryan Benoit: I’m picking D.J. I think his experience and knowledge will shine in the fight. 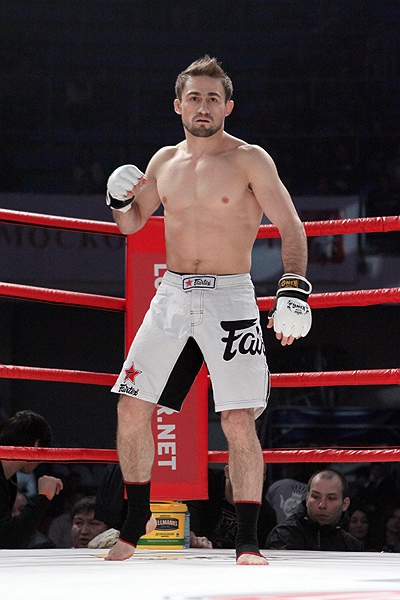 Photo: Tim Leidecker/Sherdog.com
Bagautinov has never been finished.
Brock Jardine: D.J. will finish this fight by TKO in the championship rounds.

Tom DeBlass: Honestly, I’ve never heard of the other guy. I’m sure he is great, though, but I have to go with D.J.

Tony Martin: Demetrious is so good everywhere, and with his quickness added, he is a totally different beast to deal with. D.J. wins by third-round submission.

Beneil Dariush: I’m always wrong and I don’t want to jinx anyone. With that being said, I pick “Mighty Mouse,” knock on wood.

Seth Baczynski: Johnson wins by speed and accuracy. Only guy that beats D.J. is my boy, Dominick Cruz. Plus, D.J. has experience going five rounds.

Josh Sampo: Can’t wait for this fight. Love the flyweights. I feel that Ali is going to have a hard time with “Mighty Mouse’s” speed. Ali has to find a way to get around the speed if he is going to be able to compete with him. “Mighty Mouse” does an amazing job with his footwork and will have to keep it up to outstrike the Russian. “Mighty Mouse” has to strike effectively to stay away from his power.

Eric Prindle: Johnson wins by KO in the second round with an overhand.

Travis Lutter: I am going with Demetrious in this one.

Kyle Kingsbury: Well, after saying that T.J. Dillashaw didn’t stand a chance in any category against Renan Barao, I think it’s safe to say that my comments should be used for comedic purposes only. Bagautinov has absolutely no chance in hell of winning this fight. Demetrius wins in every category.

Mitch Clarke: I’m going with D.J. by decision. I think he’s too dynamic and is able to mix up striking to takedowns too much for Bagautinov to keep up.

Jeff Hougland: “Mighty Mouse” is the best 125-pounder on planet Earth, and he will prove it again by finishing Bagautinov by submission in the second round.

Ray Elbe: “Mighty Mouse” works with Matt Hume, who is one of the smartest men in the business of MMA. I expect Demetrious to have a great game plan and to use his boxing and wrestling to pick up the decision win over Bagautinov.

Igor Araujo: Johnson has the speed. Bagautinov has better skills with his striking, but Johnson’s takedowns will make the difference. Demetrious will keep his belt by decision.

Zach Makovsky: Ali can put an end to your night if he connects well, but I think Demetrious is too fast, too versatile and too smart. D.J. wins by submission late in the fight.

J.J. Ambrose: I doubted Demetrius against Benavidez before and ended up eating my words. Not this time. “Mighty Mouse” wins via TKO in round two.