One question going into Saturday’s showdown with Houston Alexander is whether Kimbo Slice will look respectable in his first official fight inside the Octagon. Slice, who was featured on this season of “The Ultimate Fighter,” didn’t embarrass himself on the show like some might have hoped, but the bearded former street brawler didn’t make it past his first bout either.

A win over Alexander would mount to a modest upset for the polarizing Slice. While Kimbo is naturally heavier, Alexander’s crisper striking, harder punching and greater experience against better opposition is expected to lead the way to a victory, maybe even an easy one.

Still, Slice remains a bruiser with power in his hands, and though Alexander is better at what Kimbo does best, this is a fight and anything can happen. As expected, many a veteran refused to even comment on this fight and a few others responded to prediction requests with rude remarks against Slice. However, quite a few brave souls elaborated on their predictions to give you this edition of the Pros Pick.

Matt Lindland: Great! One of these guys is getting knocked out and hopefully (will) be gone and so irrelevant, we won’t have to hear about him anymore.

Ray Elbe: Kimbo Slice by Dairy Queen-parking lot beatdown. Kimbo gets his bread just in time to buy a six-deuce shirt for Christmas.

Tom Gavrilos: Kimbo Slice by KO. Houston is tailor-made for Kimbo in that he doesn't pose a major submission threat.

Stephane Vigneault: I think Kimbo can win this one. Since watching TUF, I think Kimbo improved a lot. He is a very good person and I think he is a real MMA fighter. Kimbo by TKO.

Gabe Ruediger: Interesting fight from a slugger point of view. It will most likely be over in two minutes. First guy to land is the winner. Who does that? No idea. Should be entertaining in a "WOW, they hit hard" way.

Ryan White: It’s going to be a good standup war and will be interesting to see how Kimbo will do against a tough fighter like Houston. They both have big knockout power.

Josh Kyrejto: Houston Alexander by KO. Kimbo is a street scrapper with no real skill other than being tough. You can't just walk in off the street and into our world without training your ass off. Its bull---t that he even gets a shot in the UFC.

Dewey Cooper: Kimbo vs. Houston Alexander! I see this fight being an explosive first-round knockout by Houston Alexander. There's no reason to think Kimbo can win this fight when he has not beaten any fighter at the caliber of Alexander, not to mention Houston seems to have the advantage in hand speed. Lastly I don't trust the chin of Kimbo Slice. He'll go to sleep in the first round. 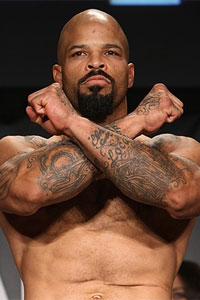 Dave Mandel/Sherdog.com
The pros are split on Houston-Kimbo.
Mike Ciesnolevicz: Great matchmaking by Joe Silva! This is a fight I am excited to see. No doubt it will be entertaining and a great stylistic matchup. I would bet everything I own that it doesn’t leave the first round. I will have to say Kimbo will be victorious by being the naturally bigger man. Neither one of these guys is well-rounded enough to take it to the ground and exploit the other’s weakness. Somebody is definitely getting KO'd, but then again maybe I’m wrong and these guys put on a BJJ clinic like we have never seen. Kimbo by armbar?

Zac George: Both will do us the favor of brawling hands down, chins up. So I pick whoever finds the other guy’s chin first. Kimbo + more hair + better hidden chin = KO win.

Erik Paulson: Happy holidays! Kimbo is a media icon. He’s very marketable and can do lots of films, commercials and movies. I saw him in a show last night on TV, (and) he was very funny and believable. I’ve seen Alexander in many magazines and I want to buy his new shoes that he advertises! Alexander is a very similar type of fighter (to Kimbo); straight to the point and likes to get the job done quickly. I think that both fighters have improved drastically in their game. I think when the bell rings, I’m gonna be sitting back, eating some pizza or popcorn and will be totally excited just waiting to see what happens (and) so will the rest of the world. I think the fight will go to the man with the best game plan, later, (and) to the man with the best overall conditioning and the strongest will.

Chael Sonnen: I think Matt Hamill vs. Jon Jones is a great fight and I can’t wait to see it.

Roland Sarria: Houston Alexander will win on a decision.

Mac Danzig: I’m trying to think of a prediction that will further upset uptight fans and make them cry about how I supposedly don’t have a right to make fun of other fighters, but with this one, I’m drawing a blank. The only thing that comes to mind when I think of this matchup is, “Who cares?” Then I remember that people are intrigued by dumb matches, which is why we have matches like Butterbean vs. Tank Abbott and Jose Canseco vs. Hong Man Choi. The truth is, Kimbo could sell a fight to see Mr. Van Driessen. And what can you say? People just want to see a guy who beat up homeless folks in a boar storage lot compete in a sport with consummate professionals. They want to see what will happen, even though they know what the outcome will be. Kimbo will get his bread to feed his family despite having no business in the UFC and the fans will wholeheartedly pay for it. Now this is where people who like this goofball for some reason can grit their teeth at their computers and talk to each other about how Kimbo would “thump” me if he saw me in “da streets” … Eh, anyway, I think Houston should win this, but it’s just a fight after all and anything can happen. I suppose you can mark me down as “undecided” or just plain “unpopular.”