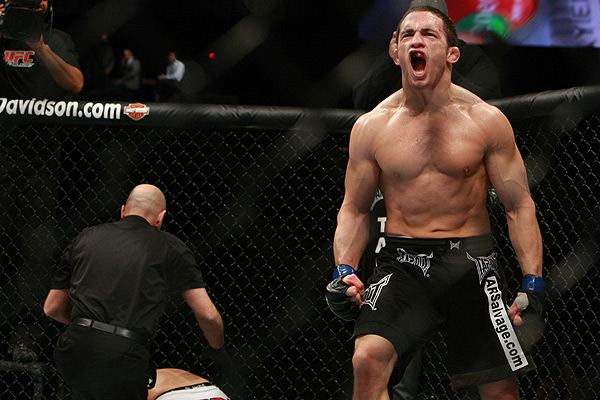 
They represent the new breed of welterweight.

Inching towards title contention, Tristar Gym representative Rory MacDonald will lock horns with the heavy-handed Jake Ellenberger in a pivotal 170-pound showdown at UFC on Fox 8 on Saturday at KeyArena in Seattle. The once-beaten 24-year-old MacDonald will enter the Octagon on the strength of four consecutive victories. Reign MMA’s Ellenberger, 28, has won eight of his past nine bouts.

Sherdog.com touched base with a number of professional fighters and trainers to gauge their opinions on the UFC on Fox 8 co-headliner:

Ricardo Liborio: I can’t see this fight going to a decision. The hard part is to say who’s going to win. I pick Ellenberger by TKO or submission.

Michael Guymon: I’ve had the luxury of fighting Rory and having trained hard with Jake in MMA. Both are strong with good wrestling and striking. I believe Rory has a better submission game than Jake, but Jake has a stronger striking game with more power than Rory. Also, Jake has a much better chin. I dropped Rory with the straight right, whereas with Jake, I have hit him with the kitchen sink and shovel in the face and he did not bat an eyelash. I see Rory getting uncomfortable with Jake on the feet and going for the takedown. Jake will have no problem shutting down the takedowns. Ellenberger will end up getting the KO in the second round.

Benji Radach: I have to go with Ellenberger on this one. He has better wrestling and packs a punch.

Cameron Diffley: I am going with Marines vet Ellenberger by decision. He brings in more experience against a higher amount of superior opponents. I think he can frustrate MacDonald with his movement, timing and a good ability to mix takedowns and strikes. MacDonald is a force, but I see Ellenberger starting to steal round two and then three, closing with a hard-fought decision.

John Dodson: I have Ellenberger because Rory has never been hit by someone like Jake; and Jake’s wrestling is some of the best in the division.

T.J. Waldburger: That’s a tough pick. I’d give strength to Jake and overall technique to Rory, so I’d lean more towards Rory, expecting him to be more strategic.

Daniel Downes: Ellenberger has the clear advantage when it comes to power and Twitter insults. Much like a college degree nowadays, though, the usefulness of those two things tends to be overrated. MacDonald’s footwork, speed and ability to string more combos together lead him to a unanimous decision victory.

Tom DeBlass: I believe Rory will win. He’s too technical and well rounded. He will win a 30-27 decision.

Brock Jardine: I’m going with Ellenberger in this fight. I think he wins by KO.

Joe Duarte: This is a tough fight to pick, but I have to go with Ellenberger.

Tarec Saffiedine: I think Ellenberger is on a good run and hungry for the W. I see him winning.

Caros Fodor: Have to go with McDonald for this one. I have a few friends who train with him, and they say he is the truth.

Igor Araujo: This fight can be a crazy fight or a boring one. If this thing goes crazy, I have Burger King, oops, sorry, MacDonald by decision.

Brian Melancon: I think it is a very even fight, but I’ll give the edge to Ellenberger due to his ability to end the fight with one shot.

Scott Jorgensen: Ellenberger wins. He’s a wrestler, his striking is always improving ... and he’s a wrestler. Yes, I’m still that guy who loves his “home” sport.

Zach Makovsky: I see Ellenberger as a tough matchup for Rory, and I think the fight will be very competitive early on. Overall, though, I see Rory figuring Ellenberger out and using his versatility to pick Jake apart en route to a late third-round finish.

Chris Clements: Tough fight to pick. I give Rory the edge in technical striking and grappling, but Jake has the one-punch power and I think his wrestling is too good for Rory to take him down. I’m going to take Rory by decision.

John Gunderson: Rory is a great athlete and fighter, but I’m a huge fan of the way Jake fights; and after he smashed Nate [Marquardt], who is one of the best mixed martial artists in the game, you have to go with Jake’s power and ability to KO anyone.

Martin Kampmann: This is a tough fight to pick. I think Ellenberger can get a finish, but the longer the fight goes, the better it is for MacDonald. Ellenberger has shown [a tendency] to fade a little bit as the fight goes on because he comes out hard. He’s going to come hard in this fight, but I don’t know. They are two great guys, so I’m looking forward to watching that one.