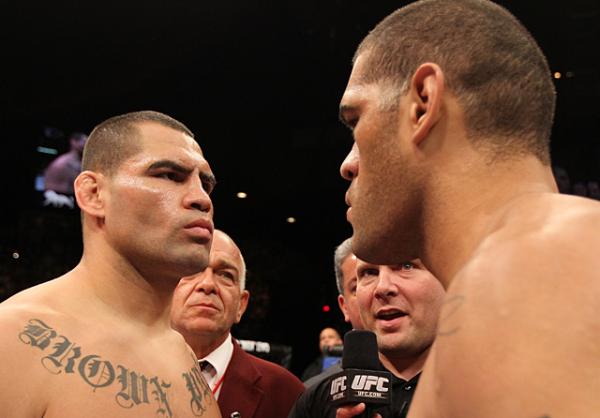 Cain Velasquez will enter the Octagon as a heavy favorite. | Josh Hedges/Zuffa LLC/UFC


A little more than a year ago, Cain Velasquez painted the Octagon red with the blood of Antonio Silva. Now, “Bigfoot” gets a second crack at the American Kickboxing Academy ace, this time with the Ultimate Fighting Championship heavyweight title on the line.

Velasquez will defend his crown against Silva in the UFC 160 main event on Saturday at the MGM Grand Garden Arena in Las Vegas. The 30-year-old Californian recaptured the championship with a one-sided unanimous decision over Junior dos Santos at UFC 155 in December. Meanwhile, Silva sent shockwaves through the heavyweight division three months ago, as he stopped Alistair Overeem on third-round punches in one of the year’s most violent knockouts.

Sherdog.com touched base with a number of professional fighters and trainers to gauge their opinions on the UFC 160 headliner:

Jason Dent: Velasquez all the way. He has the better boxing, wrestling and cardio. I hope Antonio can make a battle out of it, though, for the fans.

Ricardo Liborio: I’m biased in this one. I’m going with always-the-underdog Antonio Silva.

Keith Berry: Cain wins by TKO in the first round.

Vitor Vianna: I think Velasquez is the best heavyweight at the moment. His game is very hard [to beat], and I can’t see “Pezao” winning that fight by points. The only chance “Bigfoot” has is a KO. Cain can win by points or TKO. I’m hoping “Bigfoot” wins but I’m [telling you] what I’m really thinking about that bout.

Mike Pyle: I feel Cain’s wrestling will win this fight once again. Winner is Cain via unanimous decision.

Tom DeBlass: Cain wins by second-round TKO. Not much will change [from their first fight] except going [at] it a little longer.

Tarec Saffiedine: I think Cain is going to win a unanimous decision with his striking and wrestling pressure, but Silva won’t make the same mistakes and he will be hard to finish.

Jeff Hougland: Cain wins by third-round KO. I think Silva will be better prepared this time around, but Cain’s skill set will be too much for him.

J.J. Ambrose: As impressive as “Bigfoot” was in his last fight, I don’t see anyone dethroning Cain anytime soon. He is the best heavyweight in the sport and will be for a long time. He’ll take the fight by TKO in the second or third round.

Michael Guymon: Cain all day. Cain is going to end up finishing him with ground-and-pound somewhere in the third round.

Mike Ciesnolevicz: This fight already happened, and it is not going to be any different this time. Cain has superior boxing, wrestling, speed and endurance. “Bigfoot” has to hope to land a big shot and rock Cain. Silva at times has not gotten the respect he deserves. He has huge wins over Fedor Emelianenko and Alistair Overeem, but guys like Cain and Daniel Cormier will always be his kryptonite. They are both just bad style matchups for him.

Colton Smith: Velasquez will outclass, out-strike, outwrestle and out-grapple “Bigfoot” while cruising to a second-round TKO.

Mark Bocek: Velasquez wins by stoppage inside of three rounds.

Mitch Clarke: I’m picking Cain by TKO or decision. I think “Bigfoot” has improved since the last fight, but I think Cain will be able to impose the same strategy as last time and have the same result.

Zach Makovsky: I believe this fight will look pretty similar to their first encounter, with Cain dominating and getting a first- or second-round TKO.

Steven Siler: I don’t see this fight being any different than the first. Cain wins by steamroll.

Caros Fodor: Even though Silva has some of the best upsets I’ve ever seen, I think Cain will take this. To pull an upset, Silva would have to knock Cain out. I don’t think he will be able to do that from the bottom, where Cain will put him very quickly.

Eric Prindle: Velasquez will win. I think he will win all the rounds, hands down.

Chris Clements: I’m going with a Cain TKO in the fourth. I don’t think “Bigfoot” is fast enough to stop Cain on the feet or stop the takedown. Cain is too athletic and can keep the pace high through all five rounds if need be.

Erik Paulson: “Bigfoot” Silva is on a winning streak. The only problem is that when Cain is on and in shape, which is almost always, he’s super hard to beat. Cain loves to strike and then hit that single-leg to the takedown to go on top. He rides Brazilian jiu-jitsu guys real well while on top, pounding their faces constantly. I believe that Cain will win this one. This will be very exciting to watch.

Travis Wiuff: This will be a repeat of the first fight. Maybe [it] goes a round longer, but eventually Cain gets on top and finishes Silva.

Javier Vazquez: Cain at this point will be tough to beat. The only one that has a shot would be Junior dos Santos, and I think when they fight again, Cain dominates again. As much as I like “Bigfoot,” I can’t see him winning this one. Cain is too fast and his wrestling is too good. Cain wins by TKO in round two.

Johny Hendricks: Velasquez wins, for sure. [He has] better wrestling and too much hand power for “Bigfoot.” He’s a lot quicker, as well.

Travis Lutter: Cain’s cardio will be the decider. He sets such a fast pace that it will be hard to beat him.

Adam Cella: I’m going with my gut on this and saying “Bigfoot,” and here's why: look at the momentum he has going into this fight. I think he is highly motivated and I think he has all the skills to beat Cain. He just needs to use them. Cain is a great wrestler with knockout power and that worries me, but I’m going with “Bigfoot.” Hopefully, I’m right.

John Gunderson: I’m going with Cain by beatdown, probably the same way he beat him the first time.

Joe Duarte: Cain all the way.

Gilbert Smith: This is a hard one because Cain is a cardio beast, has strong wrestling and he puts together some of the best striking combos in the heavyweight division. Silva has two big feet with two lunch boxes that he calls fists, good Brazilian jiu-jitsu and the size advantage. I will keep this simple in a complex way. I am going to go with an upset and say that “Bigfoot” will win. He is on fire and will not make the same mistakes he made last time. He is longer, bigger, hits harder, and what I think will make the biggest difference is his Brazilian jiu-jitsu. If he gets on top for a split second, which with Cain will not be an easy task, he can finish the fight. With that said, I will not bet too much on my prediction because Cain can do what he already did to Silva again and win. Still, something tells me that Silva will find a way. The one thing that does scare me is that Cain’s team and coaches at AKA have faced “Bigfoot” three times, winning two of the three, which means they may have a good understanding on how to fight Silva. This can be a factor when it comes to game planning, so hopefully Silva comes with a different game plan and a different look.