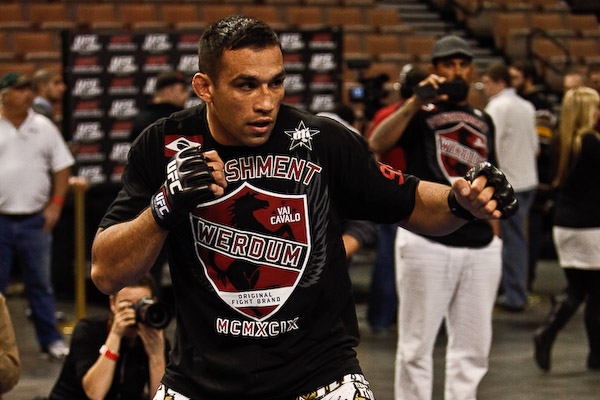 
Ultimate Fighting Championship heavyweight titleholder Cain Velasquez will soon know the identity of his next challenger.

Two-time Abu Dhabi Combat Club Submission Wrestling World Championships gold medalist Fabricio Werdum will meet Travis Browne to determine the division’s No. 1 contender in the UFC on Fox 11 main event on Saturday at the Amway Center in Orlando, Fla. Sidelined by shoulder surgery, Velasquez figures to be healed in time to face the winner sometime in the latter half of 2014.

Werdum will carry a three-fight winning streak into the cage. The 36-year-old Brazilian last appeared at UFC on Fuel TV 10 in June, when he submitted former Pride Fighting Championships titleholder Antonio Rodrigo Nogueira with a second-round armbar at Paulo Sarasate Gymnasium in Fortaleza, Brazil. Browne, meanwhile, has also won three in a row. The monstrous Hawaiian last fought at UFC 168 in December, when he chopped down Josh Barnett with a series of elbows from the clinch.

Sherdog.com touched base with a number of professional fighters and trainers to gauge their opinions on the UFC on Fox 11 headliner:

Ray Elbe: As much as I am a fan of Werdum, “Hapa” has been on a tear lately, destroying Alistair Overeem, Barnett and Gabriel Gonzaga. I pick “Hapa” via violent finish.

Jeff Hougland: Browne wins by TKO in the third round.

Mitch Clarke: Browne wins by TKO. No one can stop the diagonal elbow cage takedown defense.

Igor Araujo: I’m going with my teammate, Browne. He is a monster, and with that beard, he feels like the movie “300,” ready to fight an army. Browne wins by KO.

Jesse Ronson: It’s a tough one to call, but Browne is on fire -- what a wrecking machine; but you can’t count Werdum out. I mean the guy did beat Fedor Emelianenko. Still, I think Browne is a powerhouse and will crush Werdum in a similar fashion to what Junior dos Santos did.

Viscardi Andrade: I think Werdum knocks out and finishes Browne in the first round. I do not see how Browne wins, unless it’s a fluke.

Wilson Reis: I know these are two super-tough guys with the good momentum. Travis is on a good winning streak and has been busy. Werdum hasn’t fought in while. On the feet, the advantage goes to Travis; on the ground, it goes to Werdum. Werdum wins by submission in round one.

James Vick: I have Werdum by decision.

Jared Rosholt: I’m going against my better judgment and picking Werdum, with improved boxing, good knees and a superior ground game. It should be fun. Photo: Dave Mandel/Sherdog.com
Browne is on quite a roll.
Nick Ring: I have Browne in this one, by first- or second-round TKO.

Daniel Downes: Browne has the advantages in striking at a distance. Werdum has power, but he doesn’t have the speed or tendency to string combinations together to present a danger. What he does have, though, is the superior jiu-jitsu and extremely dangerous submissions from top or bottom position. This fight will be decided in the clinch. Even if “Hapa” can’t drop those elbows on Werdum’s skull, he should be able to out-position him against the fence and land knees and inside punches. It’ll be a slow grind, but Browne takes the unanimous decision.

Ryan Benoit: I’m going with Browne by KO. I think Browne is on a strong run to the top, and it’s going to be hard to stop him.

Beneil Dariush: Werdum will finish Browne in the second round. He will win by being a better all-around fighter and finish him.

Joe Duarte: I am biased on this one. I’m going with Travis. You can’t teach 6-foot-8.

Ben Saunders: It doesn’t matter who wins. The UFC is going to be in my city of Orlando, and I couldn’t be more excited. The whole card is sick.

Mike Ciesnolevicz: Well, I keep picking against Browne, but he keeps winning. I thought Gonzaga, Overeem and Barnett would all probably beat him. I think I will pick against Browne one more time. I believe Werdum can hang with him on the feet, and I know Werdum can submit him on the mat. Werdum’s standup has come so far the last few years. He has really good muay Thai skills to accompany his world-class ground game. The guy submitted Overeem, Fedor and Nogueira, who are three of the best heavyweight fighters of all-time; and now he is dominating a lot of guys in the standup. I don’t think it will be an easy fight, but I do think Werdum can pull this one out. I’m not a fan of Browne’s semi-illegal elbows. I don’t know if that is a legal technique if you really think about it, and I don’t think the referees and commission are really sure, either, so they just kind of go with it. There is a very fine line separating illegal from legal with the way he throws the elbows. I believe it is a grey area.

Benji Radach: I’m going to pull for Werdum. He is due for a good win. Werdum wins by submission finish, as long as he can neutralize Browne’s strikes.

Gabe Ruediger: I didn’t even know this fight was happening and haven’t even thought about it. I asked my friend Tom-Tom what he thought and this is what he said: “I think if Werdum can keep his pace and make it his fight, he wins. He will try to get it to the ground because I don’t think he would stand and bang with Browne.” My normal pick would be Browne, but my ignorant fanboy gut is saying Werdum takes it because he has more ways to win, especially with his Brazilian jiu-jitsu. Now, Tom-Tom isn’t a pro, but he is a self-appointed ignorant fanboy, so he probably knows what he’s talking about.

Kyle Kingsbury: Browne wins by elbows to the temple.

Colton Smith: I have Browne by ’Merica domination. Travis has shown himself to be too athletic and game plan-oriented for past opponents, and the Brazilian will be no different. Browne wins by TKO in round two.

John Gunderson: I’m going with Werdum. I believe he has shown he has the capable skills to strike with Browne, and if the fight hits the canvas, Werdum should be able to finish him with ease. Browne has been on a great roll, though, and has a lot of momentum behind him, but Werdum is a bad matchup for him.