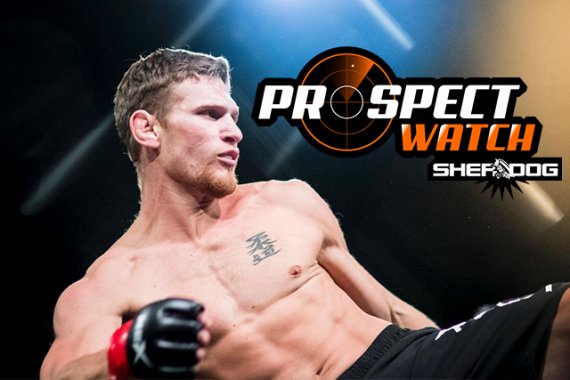 
Melbourne, Australia’s Kitt Campbell knew long before he stepped into a ring or cage that professional fighting was something that he wanted to try his hand at. Having first made inroads into the combat sports world when his Dad enrolled him in judo at 15 years old, and having been an avid MMA fan from a young age, Campbell thirsted for the opportunity to test himself.

Nine years later, Campbell has made a name as one of Australia’s most promising prospects, piecing together a 10-3 record that included a stint as the HEX welterweight champion. On June 24, he will return to middleweight after a six-fight stint at 170 pounds and attempt to wrest the Eternal MMA middleweight crown from Robert Whittaker protégé Isi Fitikefu at the Melbourne Pavilion. Following that, he’s got his eyes set on signing with the Ultimate Fighting Championship.

“It started from a judo background.” Campbell told Sherdog.com. “I started judo when I was 15, my Dad got me into it. I competed nationally in judo, from there I went into a bit of wrestling and some Brazilian jiu-jitsu, and then picked up my striking game. Within probably about six months of doing a bit of striking, I had my first professional fight, which was in 2013. I haven’t looked back since.

“It’s always been about taking it all the way” he continued. “That’s always been my goal. It [was] hobby but I never treated it like that -- I always treated it as a full-time career. My love for the sport was strong from an early age, from when I first started, and it’s still just as strong, if not stronger. I take it very seriously.”

Campbell -- who goes by “The Killer” when he steps into the cage -- doesn’t just talk the talk, he walks the walk as well, quitting his job as an electrician 18 months ago so that he could focus all his energy on becoming a more complete fighter. It’s a decision he admits was difficult to make, especially given he has a young daughter and three stepchildren to support, but with a long list of sponsors (RVCA, ANR Transport, ALH Group, Khouri Workwear, San Remo Hotel, Hit IQ and Cooks Electrica) to help keep the lights on, he figured it was a necessary sacrifice if he wanted fighting to pay off in the long term.

“I’m not making a killing,” he said wryly. “I’m not making massive amounts of money yet, but it’s enough to put all my focus into training. That’s what I need, that’s the level that I’m at. The guys that I’m fighting now are doing that too. Pretty much every guy I’m fighting is training full-time, I need to match that.”

It’s hard not to agree with Campbell’s point about the maturation of the MMA scene Down Under; the region had produced a swath of big names in recent years that emerged from a shark tank of hopeful prospects jockeying to get on the UFC’s radar. Having anchored the last four fight cards he’s fought on for Hex Fight Series, one of Australia’s most popular MMA organizations, Campbell hopes to outgrow the regional scene and join his ANZAC counterparts on the big stage sooner rather than later.

Asked to reflect on his success so far, the 24-year-old is contemplative, but also can’t help but look forward to the next chapter in his story.

“It’s been good,” he said. “It hasn’t been easy. There’s been rollercoasters in between. [I’ve] taken a couple of losses in there -- that’s never an easy pill to swallow. It obviously makes you bounce back stronger, a lot stronger. A decent winning record too -- ten wins, you know? And I haven’t taken easy fights. I’ve always taken the toughest guys out there. That’s in welterweight and middleweight.”

“I’m going back to middleweight for this fight” he continued. “It will be interesting. [Fitikefu] will be a good fist-fight. He’s another top guy, 5-0, knockouts. I’m looking forward to this one.”

ETERNAL MMA 46 | MELBOURNE | SATURDAY JUNE 1ST We are excited to announce that we are bringing Australia’s premier MMA show to the sporting capital of the country, Melbourne we will see you on June 1st. Headlining this stacked card are 2 of the best fighters in the country. The wrecking machine that is Isi Fitikefu will be defending his middleweight title against Melbourne’s own Kitt Campbell. Both boys are non stop, action fighters so strap yourselves in for that one. Co main sees 2 of Victoria’s veterans, Rodolfo Marques and Jesse Medina clash. Both men have a host of experience and high level skills everywhere. The rest of the card will be announced in the next 14 days but we promise it isn’t one to be missed. We will be showcasing Melbourne’s amateur scene also with our pro-am format. Tickets will be on sale through the fighters and online via eventbrite from tomorrow. Eternal MMA, challenge your limits don't limit your challenges.

Campbell will prepare for Fitikefu in the same way he always does, splitting time between former UFC middleweight Dan Kelly’s gym, the Resilience Training Centre, and sessions with his head coach, former kickboxing champion Toscar Petridis. Campbell is proud to say that he’s never felt the need to travel abroad to round out his game, and can’t speak highly enough of his peers in the gym.

“Guys used to fly overseas to do their training, but we don’t have to do that anymore,” he said. “We’ve got everything we need here, you know. My coach Toscar Petridis, he’s an eight-time world kickboxing champion. He’s a world class trainer, I’m very lucky to have him. We’ve got all the boys down at Daniel Kelly’s gym Resilience. We’ve got good talent, we don’t need to travel anywhere. We’ve got what we need here. It’s pretty special, you know? You get to stay home, be around the family and stuff, and get to do the job. And not have to worry -- ‘I’m not getting the right training’ [or] ‘the partners aren’t good enough’ -- we’ve got everything we need down here.

“I remember when I was first starting [training], sort of looking around at the top dogs – thinking ‘it would be awesome if I could be there one day’” he elaborated. “Obviously in the UFC, but also just on the Australian scene. To be there [headlining shows] is such a good feeling. I hope that I can inspire a few people, like I got inspired by the guys I train with, the old dogs.”

Asked about how he spends his time outside of training, Campbell admits he likes to switch off from fighting, and isn’t as avid a fan of the sport as a lot of people would assume.

“I’ve got my family -- my daughter and three step-kids,” he explained. “A lot of my time and focus is on them when I’m not training. That’s grocery shopping, cooking dinner, cooking lunches, running the kids to school. It takes about an hour to get to training. I get in, train for 90 minutes to an hour, then drive back home. The rest of the day is just focused on stuff around the house. That’s about it really. Whenever I get some free time, I’ll try and do stuff for myself. But most of my focus is on training and family.”

“If someone that I like is fighting, I’ll watch it,” he continued when quizzed on his watching habits. “But otherwise I try to switch off from it. When I’m at training, it’s got my full, 100-percent focus. When I get home, I’ve got my baby daughter, my family, that’s where my focus goes… I’m not a diehard fan who can’t miss any of the events. I’ve never really been like that.”

As for what comes after June 24, Campbell admits there have been talks between his manager, Maurice Blanco of First Round Management, and the major promotions. If everything goes to plan, we’ll see him debut with the UFC later this year in Sydney on the undercard of the Whittaker-Adesanya unification bout. For Campbell, the bright lights can’t come soon enough.

“Yeah, there’s been back and forth emails [with the promotions],” he said. “What they’ve basically said is that I need to keep winning, and I’ll be on the right path. I don’t think it’s too far off. I think we’re getting very close.”

“I’ll take any offer that I get from the major organizations,” he elaborated. “Especially the UFC. It would be a dream to get on the undercard of the Whittaker-Adesanya. I’ll definitely be pushing for that, but I take it fight by fight. I have to get this fight out of the way first.”

Jacob Debets is a law graduate and writer from Melbourne, Australia. He has been an MMA fan for more than a decade and trains in muay Thai and boxing at DMDs MMA in Brunswick. He is currently writing a book analyzing the economics and politics of the MMA industry. You can view more of his writing at jacobdebets.com.
« Previous Sherdog Prospect Watch: Joshua Culibao Next Sherdog Prospect Watch: Chelsea Hackett »