LAS VEGAS -- From the ashes of a cancelled Affliction card rose a lineup Saturday inside the Thomas & Mack Center that featured up-and-comers and quality veterans from Xtreme Couture. Save for the lackluster main event between kickboxing legend Rick Roufus and UFC veteran Hector Ramirez, every fight on the Night of Combat bill was entertaining.

Roufus, a six-time world champion in kickboxing, did well in the opening round. But once Ramirez took “The Jet” off his feet, it was all downhill for the middle-aged legend. Roufus found it almost impossible to scramble out from being pinned in side control and full mount -- a bad position he found himself in for virtually every second of rounds two and three.

“I watched him through American kickboxing all the time when I was in junior high,” Ramirez said after he was awarded a unanimous decision via three tallies of 29-28. “I knew he kicked hard and I didn’t want to let him get going, so I needed to take him down. He caught me with a good head kick in the first, so I had to be smart and keep him off his feet.”

In the only other match to go three full rounds, IFL champion Jay Hieron pounded last-minute replacement Chris Kennedy to win a lopsided unanimous decision, 30-27 on all three cards. Hieron battered and repeatedly slammed Kennedy -- a replacement for Bryson Kamaka, who had been scratched for failing a prefight urinalysis.

Kennedy was cut on his forehead and suffered a gruesome hematoma above his left eye, but he never stopped fighting back.

“He stepped up like a warrior. He was bloody and he just kept going,” Hieron said of Kennedy. “I’ve been sitting on the sidelines for six months being a cheerleader, and it felt good to finally get back in there. It’s been a long time since I’ve been able to use my elbows, too. With Xtreme Couture, it’s ground-and-pound 101. It wasn’t my best performance because I didn’t have any time to really prepare for this guy, and he was tough.” 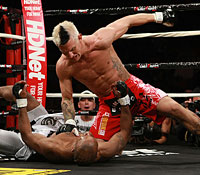 Dave Mandel/Sherdog.com
John Alessio finishes Gideon Ray.
UFC veterans Gideon Ray and John Alessio were fired up at Friday’s weigh-ins as the two exchanged verbal barbs and promised fireworks. Come fight time, Alessio lit his fuse first and blew up Ray. Ray had charged at Alessio and trapped him in his own corner, but a lazy right cross from the Chicago fighter allowed for Alessio to quickly counter with a crippling left hook.

The punch floored Ray instantly, and Alessio unloaded a barrage of left-handed hammer strikes, with his final three knocking Ray completely out in just 45 seconds.

“This training camp was phenomenal,” an elated Alessio said afterward. “I got to work with everybody this time. … They said that left hook would be there all day, and it was.”

Ray was out on his back for a short period of time, but it took him several minutes before he was able to get off his stool and walk out of the ring. He was then met by a legion of hecklers and had to be restrained by commissioners and his team.

Mike Pyle slipped on a slick armbar to submit Brian Gassaway 4:21 into the first round. Pyle had a surprisingly easy time, as he scored a terrific takedown early and quickly moved to full mount. From there, he peppered his foe with various strikes, and when Gassaway tried to roll out to escape, the arm was there for the taking.

“I had him down, and he was a bit sideways so I got the arm lock,” Pyle said. “I wanted to pound him out a little more and make him quit, but I’ll take the submission. That’s what I’m all about anyway.” 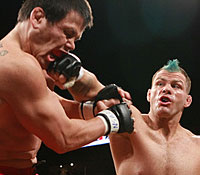