When rumors of Quinton Jackson’s withdrawal from their highly hyped Dec. 12 bout reached Rashad Evans, he hoped against hope the news was nothing but Internet banter.

It was not. Evans and the rest of the mixed martial art world received the news that Jackson would indeed shirk his commitment to fight Evans, his fellow coach on this season of “The Ultimate Fighter,” at UFC 107 in Memphis, Tenn.

The former UFC light heavyweight champion has some tough choices to make in the wake of the Jackson’s decision to play B.A. Baracus in the movie version of “The A-Team” rather than face him in what was supposed to be the climax of the UFC’s reality show.

While Evans -- like many pundits -- does not believe Jackson’s retirement will last, he still has been forced to reassess his situation in the meantime.

He made his first decision when the UFC offered him a main event fight against Randy Couture for UFC 105, scheduled for Manchester, England, in November. Evans did not feel he had either the time to prepare or the motivation to fight Couture and declined the bout.

“That whole fight was just wrong from the beginning,” said Evans, who has not competed since his knockout loss to Lyoto Machida in May. “You’re going to come to me and say I want you to fight Randy Couture in eight weeks when I was supposed to fight Rampage Jackson? How do you go from fighting the number two guy to fighting Randy Couture, who is coming off back-to-back losses in the heavyweight division [and] is 46 years old? What do I really have to gain in that situation? In all due respect to Randy, you know, Randy is a legend and all, but to be honest, it’s a lose-lose situation for me.

“I’m going into a camp where I probably actually get to train for maybe about six or seven weeks, and then I’m fighting in Manchester, England. And then I’m fighting Randy Couture and I don’t have anything really to gain out of the situation,” Evans continued. “It’s kind of taking a step back for me because I was on track at trying to get a shot to get the belt back and I think, more than anything [with] fighting Quinton, I get a chance to finally get it right for myself, to go in there and say, ‘This is where I belong.’ And fighting Randy just would have been a big distraction for that. I don’t know, maybe people wanted to see it, but it was nothing that was interesting to me.”

Evans went on to state Couture could emerge as a potential opponent in the future should he re-establish himself in the 205-pound division. Evans suggested a convincing win over Brandon Vera in November would go a long way in proving “The Natural” remains relevant in the upper echelon of mixed martial arts. 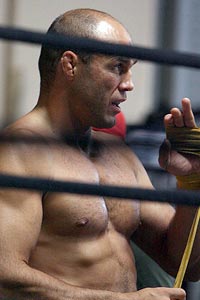 Dave Mandel/Sherdog.com
A lose-lose situation for Evans.
Evans admitted he was a little down after the rug was pulled out from under him. Losing his first fight and then losing an opponent he has little trouble getting up to face has created an unenviable situation for the gregarious former champion.

“You are only as good as your last fight, and, after me getting smashed up like that in my last fight, it really left a bad taste in my mouth -- which it should have,” Evans said. “But it’s kind of like to the point where I’m ready to fight again and I want to fight someone that has something worth a challenge for me to fight, and that was what I was looking for with the Rampage fight.”

He admits it is much easier to prepare for a fight when he harbors legitimate ill will towards an opponent.

“Fighting is our job and we love to do it, but sometimes it gets hard when you don’t have any true animosity for somebody and sometimes it makes it hard to go through camp,” Evans said. “With that said, being able to have someone that you really don’t like and going in there and fighting them is always a treat, and we had an opportunity for that and this was going to be a fun fight. I’m just disappointed that it’s not going to happen when we thought it was going to happen.”

Jackson cited comments from UFC President Dana White as a motivating factor in his decision to retire, and Evans seems to agree that criticism could be behind his move to abruptly retire from the sport.

In a strange departure from the heated back-and-forth banter the two would-be opponents have engaged in since Jackson defeated Evans’ teammate, Keith Jardine, in March, Evans seemed to give his rival a break.

“It’s just a timing thing; Rampage is a very sensitive guy, very sensitive, and he gets his feelings hurt pretty easy,” Evans said. “That’s one thing I noticed about him through the duration of the show, was that sometimes I would say something to him and it would really, really hurt his feelings. I was just giving it to y’all like you was giving it to me, but when I said certain things to him, I could tell it really hurt his feelings because he’s sensitive.”

Evans understands he has to move forward, but he holds out hope that Jackson’s self-imposed absence will be brief. White hinted the earliest possible makeup date would be sometime in the spring. Evans said he had no problem waiting until March 2010 to face the man he has been looking forward to fighting for so long.

If he accepts another fight before then, it could further delay a potential fight should Jackson relent and return to the UFC. Evans, who leaves his family behind when he travels to Albuquerque, N.M., for training camp, half-jokingly noted that he does not see a way he could accommodate back-to-back fights without getting divorced.

“I’m going to have to win every fight because I’m going to be by myself,” Evans said with a chuckle. “Do you choose your career over your family life?”

Evans then took another turn at trying to analyze Jackson and his reasoning, giving a little insight into his own motivations as a mixed martial artist.

“He’s a fighter, man, and if he loses sight of that too early, then he just may be a gimmick in Hollywood,” Evans said. “This all depends on what you want to be in the sport. If you just want to go in there and make some money, then I guess he achieved his goal, but for me, it’s about more than making money. I want to be a legend in the sport. I want to be somebody that they pull up the videos of and say, ‘Watch, this guy did this.’ I want to be that dude.”