HEMPSTEAD, N.Y. -- The martial arts are a family affair for Brent Weedman. Born in Louisville, Ky., his father was a police officer for more than 30 years, and, as the recruiting coordinator in charge of training prospective officers, physical contact and fighting were part of the job.

“He was really into fighting,” Weedman tells Sherdog.com. “My father did full-contact Japanese karate, judo -- things like that.”


Advertisement
Naturally, as the son of a martial arts-inclined father, Weedman began his martial arts training at a young age. Pushed into the sport at age 4, he soon discovered an aptitude for martial arts.

Weedman, like many of his peers, followed a natural progression into mixed martial arts. After training muay Thai, kickboxing and Brazillian jiu-jitsu, he began to fight professionally on the Midwestern MMA circuit.

“I never stopped training,” Weedman says. “I was always the martial artist. If you win enough, someone will offer you to fight.”

Backed by an excellent record, Weedman signed with Bellator Fighting Championships in 2010. Fighting Strikeforce veteran Rudy Bears in his hometown of Kansas City at Bellator 16, he entered his promotional debut as the underdog. Questions about his health dogged him.

“I was coming off a seven-month period where I couldn’t fight,” Weedman says. “It was a freak thing. I had a blood clot in my knee. It was, like, ‘Well, maybe you’ll never fight again, and, also, it could kill you.’ The biggest worries were pulmonary embolism and the clot going into my brain and [that] I could die.”

Receiving the contract soon after coming back from the injury, Weedman was thrown into the fire immediately. In less than a round, he had announced his arrival in Bellator, as he knocked out the favored Bears from back mount.

“I got the Bellator contract right after coming back [from injury], and I was worried about that,” Weedman says. “I wanted to fight a few times to get the rust off. I fought Rudy Bears, who is not an easy fight, in his hometown. I’m pretty sure I was supposed to lose to him, and I won. I had his back and I had one arm trapped. The round was about to end, and I knew I wasn’t going to get the submission. He kept grabbing my wrist. He reached up, [and] I hit him.” 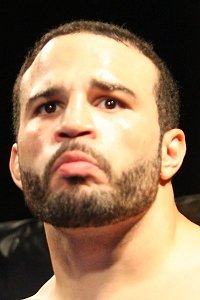 Chris Lozano File Photo
Lozano is 8-1.
Always focused on putting away his opponents, Weedman went on to secure first-round finishes over John Troyer via armbar at Bellator 23 and Jacob McClintok via technical knockout at Bellator 30. After two straight decisions -- a win over Dan Hornbuckle and a loss to Jay Hieron -- Weedman does not wish to maintain a pattern of allowing fights to reach the judges.

“It seems like slowly but surely they are weeding out the people who don’t want to finish fights,” he says. “I am painfully aware of the fact that, after finishing every one of my wins, I had two decisions in a row. My last two fights have gone the distance. That’s not good.”

Weedman takes particular pride in his desire to break his foes, not just outpoint them. Holding particular vitriol for those fighters who favor caution over killer instinct, the Kentuckian believes there are a growing number of mixed martial artists who desire to simply win on points.

“One of the toughest guys I ever fought was Tim Stout,” says Weedman, whose career-best 10-fight winning streak was halted in his defeat to Hieron. “I’m proud of that finish. People don’t finish Tim Stout. That’s a tough dude, and I did [finish him]. That’s the goal. If you want to win on points, go play basketball. The martial artists are tired of guys winning ‘technically.’ That’s why I’m trying to finish decent opponents.”

When asked to elaborate about what he meant by his reference to martial artists, Weedman explained himself further.

“The guys that come to fight, in my mind, that’s what a martial artist is -- the dudes that want to fight and aren’t trying to steal a round,” he says. “When there’s 30 seconds left in the round, our first thought isn’t, ‘How can I steal this round?’ I didn’t flurry there in the last few seconds to try to score points. I was trying to hurt you.”

Further emphasizing his disdain for perceived point fighters, Weedman took a not-so-veiled shot at Hieron and then motioned towards Rick Hawn, who was eating at a nearby table. Both men lost to the former International Fight League champion by decision.

“I wanted to get a picture with Rick with our food,” he says. “The caption could be: ‘We beat Jay Hieron, and all we got was this complimentary meal.’”

Weedman will face Chris Lozano in the Season 5 welterweight tournament quarterfinals at Bellator 49 on Saturday at the Caesars Hotel and Casino in Atlantic City, N.J. The once-beaten Lozano is coming off a rear-naked choke win over Derek Smith under the North American Allied Fight Series banner. Weedman admits the Cleveland, Ohio, native poses a serious test.

“Chris is a dangerous fighter. He’s been to one decision, just [former Bellator champion] Lyman [Good]. He’s a tough dude,” he says. “Chris doesn’t just win fights; he knocks people out. I don’t want to get knocked out. And we’ve already established that he is more handsome than me, which upsets me.” Setting his sights much higher than just his quarterfinal matchup with Lozano, Weedman is well aware of the fact that the road to 170-pound supremacy in Bellator ultimately goes through current champion Ben Askren, a 2008 Olympian who has won four consecutive fights by decision.

“The last [Askren] fight we saw was still that wrestling top game dominance,” Weedman says. “I would try really hard to submit him while [he was] taking me down.”

Weedman is cognizant of Askren’s wrestling pedigree and how he applies it to his current MMA game. Submissions may hold the key to neutralizing his wrestling, but, as Weedman admits, every one of Askren’s past opponents have tried and failed to submit the champion.

“The two big things are to do as much damage as possible because you’re not going to be standing long. It’s not a matter of if he takes you down; he’s going to take you down,” Weedman says. “And then try to catch a submission. But every single person who has ever faced him has said the same thing. No one is going to go to their local high school and outwrestle Ben Askren. He’s got, like, a 20-year head start.”

Askren’s odd style provides an intriguing matchup for virtually anyone, as he is not a traditional, straight-ahead double-leg wrestler. Nicknamed “Funky,” his game relies more on winning every scramble than his ability to just take down his opponent.

“He has a really weird wrestling style,” Weedman says. “Even if I were an awesome wrestler, I don’t wrestle like that, hence the whole ‘funky’ thing.”

Not looking past Lozano, Weedman remains intimately focused on his upcoming bout. Any potential showdown with Askren can wait.

“I got other fish to fry,” Weedman says. “I gotta think about Chris first.”

Though a crack at the welterweight crown awaits the winner of the Bellator tournament, Weedman does not view success in terms of wins or championships. Instead, in true martial arts form, he simply hopes to be proud of his career once he hangs up his gloves.

“When I think about my career and what I’d like to see, my end goal isn’t a specific thing,” Weedman says. “When I’m 45 years old and looking back on my career, what makes a man content with his life is a body of work he can be proud of. If I manage to be the champion one day and it’s under s----y means, then it doesn’t mean anything. I want to fight guys that I’m proud to say I’ve fought, and I want to put up performances I’m proud of.”
Related Articles
Latest News
ALLUFCBELLATORPFLONE