LEMOORE, Calif. -- Former World Extreme Cagefighting light heavyweight champion Doug Marshall dazzled in his second Palace Fighting Championship appearance, as he steamrolled Rafael Real in the main event at PFC 11 “All In” on Thursday at the Tachi Palace Hotel and Casino.

Marshall (9-3) -- who has won back-to-back fights since he relinquished the WEC belt to Brian Stann in March -- dropped Real with a knee to the body and finished him with strikes just 1:09 into round one.

Seven of Marshall’s nine career victories have come inside the first round, and the 33-year-old Californian still has never had a fight reach the judges. Real (5-11) has dropped three straight bouts and five of his last six.

Scheduled for five rounds, the bout nearly ended in the first, when Larson landed a crushing blow to Oliveira’s groin. The champion took his allotted five minutes to recuperate and, at one point, untied his shorts, looked down and winced in pain. 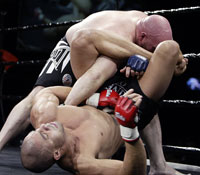 Jeff Sherwood/Sherdog.com
Jorge Oliveira's submission
game was the difference
against Isaiah Larson.
The rest of the fight played out like a 25-second loop. Oliveira (4-2-1) struck and Larson clinched. Then, near the middle of round three, Oliveira mounted Larson and blasted away at his challenger. Trying to defend against the champion’s barrage, Larson (6-2) left his arm exposed, and Oliveira capitalized. He extended the armbar and coaxed the tapout 2:18 into the third.

In one of the night’s most anticipated fights, Rambaa Somdet made his United States debut a memorable one, as he outpointed previously unbeaten Ulysses Gomez in the second of two flyweight tournament semi-finals.

The 34-year-old Somdet (6-2) lived up to his reputation as a dangerous striker and came close to finishing Gomez with a series of uppercuts in the first round. But Gomez (2-1) survived and showed his mettle during the course of the next two periods. He even caught a break when Somdet was deducted a point for illegal blows to the back of the head in the second. In the end, the deduction did not factor into the outcome, as Somdet carried the judges’ scorecards by 29-27, 29-28 and 29-27 counts.

Somdet will face Pat Runez -- a unanimous decision winner over Luis Gonzales in the other semi-final -- for the vacant flyweight championship at PFC 12 on Jan. 22.

Somdet and Runez (1-0) were not the only fighters who needed assistance from the judges.

Serao (15-7) dictated the action for two rounds and held on in round three. Jara (20-6) controlled Serao from the top late in the fight, as he pounded away with looping right hands and hammerfists. Though Serao was cut and bloodied, he weathered the onslaught and maintained his lead on the scorecards. The Brazilian will reportedly face Phil Collins -- a unanimous decision winner over Kenny Ento earlier on the card -- for the PFC middleweight crown at PFC 12.

In a competitive lightweight affair, Dominique Robinson picked up arguably the most impressive victory of his career, as he earned a unanimous decision against Takumi Nakayama -- one of only two men ever to submit Tatsuya Kawajiri.

The two engaged from the start, but the action was halted when Robinson (4-2) delivered a brutal low blow to his Japanese counterpart. Nakayama (13-12-4) was afforded five minutes to recover and later threatened Robinson with a submission. His efforts went for naught, however, as the judges sided with Robinson, who has won both his fights inside the PFC ring.

Contested at a catchweight of 148 pounds, the bout was perhaps the most competitive of the night. It was also the bloodiest. Bias cut Yagin (12-3-1) with vicious elbows in the first round but was unable to finish. Yagin easily controlled the second with excellent top control and elbows on the ground.

With the fight even heading into the third, it took a dramatic turn in Yagin’s favor. The 29-year-old caught Bias (13-7) in a guillotine choke while he attempted a takedown and forced the tapout 37 seconds into the final period. Yagin, who has won four straight, will move on to face Casey Olson in a featherweight title eliminator at PFC 12 in January. 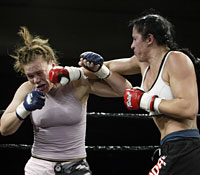 Toughill (8-2-1) pressed the action throughout the match, especially when the fight hit the ground. There, she presented a constant submission threat from her back. The 31-year-old Chicagoan -- who retired from mixed martial arts after her victory against Jen Case in 2006 -- was cast as “Steel” on season two of “American Gladiators,” which premiered on NBC in May.

Finney (4-6), on the other hand, has lost four of her last five fights -- a streak that includes defeats to Shayna Baszler and Meisha Tate.