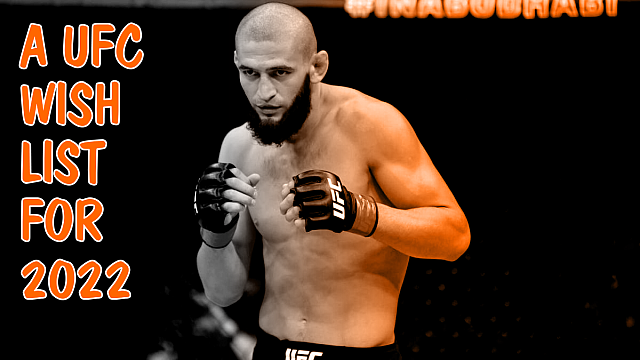 
Regardless of where you live or which holidays you observe, there’s something about the beginning of a new year that feels special. It’s like waking up to find your neighborhood blanketed with freshly fallen snow: not a single footprint or tire mark to be seen. At least, that’s what I remember from the years before I called Texas home and snow became about as real to me as Santa Claus. For a writer — for this one at least — the feeling is similar to pulling out a fresh sheet of paper or opening a blank Microsoft Word document. There is an implication of endless possibility that inspires big dreams and, hopefully, big thoughts.

It is no surprise that the turn of the calendar inspires every imaginable kind of resolution for self-improvement — professional, financial, social, romantic and of course physical — often announced through a “new year, new me” social media post. I initially sat down to write a list of New Year’s resolutions for each of the Ultimate Fighting Championship’s 12 weight classes, one thing each division could do in order to become more competitive, more stable or more entertaining. As I began to brainstorm, however, I quickly realized that many of the items on the list weren’t entirely within the divisions’ power to accomplish on their own, or even the promotion’s power to acquire for them without other variables falling into place.

In essence, I found myself coming up with something closer to a list of needs and wants than resolutions. I’m fine with that. There are a lot of moving parts involved in a healthy MMA division, and let’s be honest; most New Year’s resolutions kick the bucket before the 90-day gym membership even has a chance to auto-renew. Here, then, is a wish list for every weight class in the UFC, one reasonable or at least plausible thing that would help ensure that each division has a great year.

A final note: Several of these list items involve the UFC signing fighters who are currently laboring in other organizations. Don’t take that as an endorsement of poaching or a wish for UFC hegemony; if I write a similar article for Bellator MMA next, as I intend to, it will certainly include several fighters we last saw in the Octagon.


When Jon Jones announced his intention to vacate the light heavyweight belt and move up to heavyweight in the wake of his title defense against Dominick Reyes in February 2020, it seemed like a brilliant idea. He had reached a point where two seemingly contradictory facts — he had cleaned out the division twice over, yet the pack seemed to be gaining on him and he was now barely winning his fights — made staying at light heavyweight a high-risk, low-reward proposition. Heavyweight, on the other hand, presented practically the opposite dynamic. If “Bones” could move up and win a title, or even contend for one, he could bolster his résumé as arguably the greatest fighter ever. If he lost to a couple of good heavyweights, well, he would still be the best light heavyweight of all time by a ridiculous margin.

The move made sense then and it makes even more sense now, as Jones will turn 35 this year. The best possible thing for the heavyweight division would be for Jones and his promoter to find a financial compromise that’s acceptable to all parties, then get him at least one fight before Francis Ngannou and Ciryl Gane complete what might well be a two-fight series, so he is ready to challenge whomever emerges with the belt.

Light Heavyweight: The Legitimacy of Stability


When the UFC released Corey Anderson in August 2020 after a knockout loss against Jan Blachowicz, he was, with the exception of Demetrious Johnson, the highest-ranked fighter the UFC had let go in well over a decade. It might have gone down as a briefly surprising yet ultimately insignificant roster move, except that Blachowicz went on to win the UFC light heavyweight title the next month, then lose it to Glover Teixeira a year later. That suits Anderson’s stock just fine, as he is now 1-0 against the current UFC champ and 1-1 against the previous one. If Anderson beats Vadim Nemkov in the Bellator grand prix final in a few months, he will have a pretty good case to be called the best 205-pound fighter on the planet.

From the UFC’s point of view, that would be an embarrassing and unwelcome development, considering that the promotion prides itself on having the lion’s share of top talent, and that light heavyweight is a marquee division. The issue is stability. Light heavyweight is usually a top-heavy division, ruled by dominant champions, surrounded by a cast of veteran star contenders, but without much depth. Jones’ departure left a predictable vacuum at the top, but nearly two years from his UFC 247 clash with Reyes, nobody seems to want to be the next guy too badly. Of the UFC’s own light heavyweight Top 15, only five can boast even a two-fight win streak. Prospects have come up short in their next big test, and the old guard have taken turns beating each other up. That kind of parity is healthy in its own way, and fun to watch, but for as long as the UFC is looking for someone, anyone to separate himself from the pack, letting Anderson go looks like a dodgy move.


Alex Pereira is a godsend for the UFC middleweight division. At first glance, that wouldn’t seem to be the case. Pereira is a former two-division Glory Kickboxing champ with an exciting style and knockout power, but at 34, is crossing over to MMA in earnest far later than would have been ideal. So what makes “Poatan” more interesting than someone like former kickboxing foe Dustin Jacoby, who is both younger and far more experienced in MMA? It is of course the fact that Pereira is 2-0 against UFC middleweight champ Israel Adesanya. The second of those wins, in April 2016, was a crushing knockout that left “The Last Stylebender” facedown and unconscious in a way that would shock anyone who has only seen Adesanya during his UFC run.

Pereira has come along at the perfect time, as Adesanya has rapidly burned through the pool of credible challengers. The champ’s work last year consisted of a shot at two-division glory against Blachowicz, which went poorly enough to put further light heavyweight ventures on the back burner, possibly forever, and a rematch with Marvin Vettori that, while Adesanya won handily, didn’t teach us much. Another worthy contender — maybe even the next champ — will rise up; one always does, given enough time. What middleweight needs is a foil right now for one of its biggest stars and most dazzling fighters. Pereira, with his shared history, will be fast-tracked into the title picture if he can win another fight or two, and from there, the trash talk will be appointment viewing. Book him carefully, Sean Shelby and Mick Maynard.


If Chimaev fights at 170 pounds in the UFC at least three times in 2022, the division will be fine. It will probably be fine no matter what — one of the deepest pools of talent in the sport, with a ton of big personalities, ruled by perhaps the best pound-for-pound fighter in the world, Kamaru Usman — but an active Chimaev would be a healthy thing not just for the division, but the organization as a whole. Colby Covington, the most notable of the aforementioned talents and personalities, is now 0-2 against Usman and is reaching a point where he’s going to start becoming a problem by knocking off potential future challengers. Jorge Masvidal, another of the divisional elite, was the breakout star of 2019, but has squandered much of the time since then hawking mezcal, dressing like a Cuban-American Hugh Hefner, and fighting just once in 18 months. Oh, and he’s also 0-2 against Usman, and currently appears to spend most of his free time jawing at Jake Paul on social media.

In short, the division isn’t in trouble, so much as it’s overdue for an infusion of fresh energy. “Borz” is it. While Chimaev isn’t the only undefeated blue-chip welterweight on roster, with apologies to Sean Brady and Shavkat Rakhmonov, he has been more dominant, and carries far greater potential star power, than either one. When Chimaev destroyed Jingliang Li last October, he showed he was better than ever despite the case of COVID that had kept him out of action for over a year. That’s a good thing. The next, better thing would be if he makes that walk three times this year. He doesn’t even have to win them all; if he fights three times in 2022, he will almost certainly be in the title picture, if not already challenging for a belt, and that is what the division needs.


Make no mistake, the Professional Fighters League lightweight champ and general poster gal might be the only thing that could keep the UFC women’s featherweight division alive by the end of the year. Much was made of Harrison being in attendance at UFC 269, where there is every chance she might have been invited to enter the cage after the co-main event to challenge two-division champ Amanda Nunes for the featherweight belt. That was fouled up when Julianna Pena scored the upset of the year, and Harrison standing up and visibly yelling “f**k!” after the finish says most of what you need to know.

However, while a potential superfight between the gold medal judoka and the pound-for-pound queen lost some luster when Nunes tapped out, it’s hardly a total disaster, as any meeting between Harrison and Nunes was going to take place at featherweight anyway. The real problem is that Harrison’s decision — UFC and Nunes, or Bellator and Cristiane Justino — is now much more difficult. If Harrison elects to go for the “Cyborg” fight, the UFC featherweight division won’t be on life support so much as in a hospice, awaiting death. Nunes and Pena are set to rematch. If Nunes regains the bantamweight belt and Harrison isn’t in the UFC, the most attractive option is probably a Nunes-Pena rubber match, which almost guarantees that the 145-pound title will not be defended at all in 2022. The UFC roster has only two or three true featherweights, meaning women who can’t realistically make 135, and none of them are stringing together enough wins to make for an interesting challenge. If Harrison isn’t in the UFC, the division has no real reason to exist.