Jose Aldo for the better part of a decade was the measuring stick by which all other featherweights in World Extreme Cagefighting and the Ultimate Fighting Championship were judged.

The Nova Uniao cornerstone touched down in the WEC in 2008, dummied his first five opponents—this included his remarkable eight-second knockout of Cub Swanson—and laid claim to the promotion’s 145-pound championship a little less than 18 months later when he disposed of Mike Thomas Brown with second-round punches at WEC 44. Aldo joined the UFC as part of the 2010 merger, continued his reign atop the division and went on to extend his winning streak to 18 fights. By the time he relinquished his crown, an unfathomable 2,215 days had elapsed.

Aldo will face Petr Yan for the vacant bantamweight championship at UFC 251 on July 11, as he attempts to become a rare two-division titleholder. Ahead of his showdown with the surging Yan, a look at a few of the rivalries that have made him a historical figure in mixed martial arts: 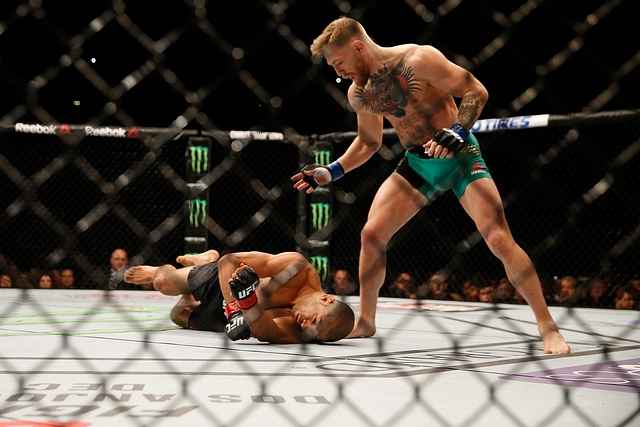 
“Mystic Mac” knocked out Aldo with a left hook and follow-up hammerfists, as he unified the featherweight crown in the UFC 194 headliner on Dec. 12, 2015 at the MGM Grand Garden Arena in Las Vegas. It was over in 13 seconds, with an unconscious Aldo at the feet of referee John McCarthy. They traded left hands in the first exchange, and both landed flush. McGregor connected on the chin, absorbed the return fire without issue and then pounced on the fallen Brazilian for the finish. The loss was Aldo’s first in more than a decade and provided his counterpart with the coronation he had long sought. 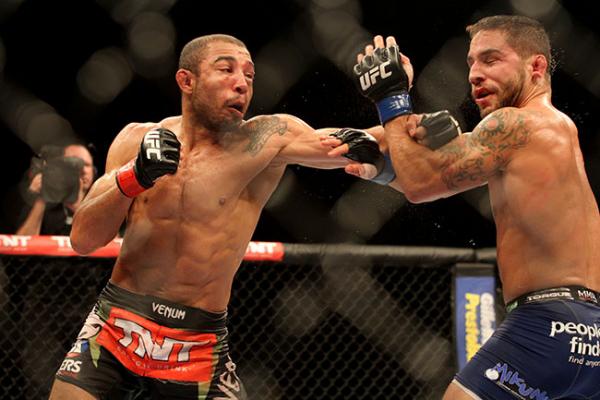 
Aldo was utterly brilliant in the UFC 142 main event, where he retained his featherweight crown for the third time with a spectacular knockout of the previously unbeaten Chad Mendes on Jan. 14, 2012 at the HSBC Arena in Rio de Janeiro. Mendes met his end 4:59 into Round 1. Afterward, a triumphant Aldo stormed out of the cage and into the middle of a boisterous, pro-Brazilian crowd, where he was carried around on the shoulders of his countrymen in an emotional scene that remains as fresh now as it was the day it happened. The finish was breathtaking. The two men engaged in an extended clinch against the cage, with Mendes attached to Aldo’s back. The Brazilian champion separated Mendes’ hands, broke free and, in one motion, turned and met the challenger with a knee to the head that was equal parts exquisite and devastating. The Team Alpha Male standout went stiff and hit the canvas. Aldo followed, blasted him with a right hand and put an exclamation point on what was his 14th consecutive victory. From the start, it did not go well for Mendes. Aldo attacked with savage kicks to the legs and stymied every one of his takedown attempts. With the decorated amateur wrestler unable to put the fight in a more advantageous position, it was only a matter of time before Aldo zeroed in.

In their UFC 179 rematch two-plus years later on Oct. 25, 2014, Aldo aced his sternest test to date. He met the hyper-aggressive Mendes with a steady diet of accurate power-punching combinations and took a unanimous decision—49-46, 49-46, 49-46—from the upset-minded Californian at Maracanazinho Gymnasium in Rio de Janeiro. Aldo also denied seven of the eight takedown attempts Mendes sent his way, turning their rematch into a kickboxing battle. On the feet, the Brazilian’s quickness, technique and experience prevailed. 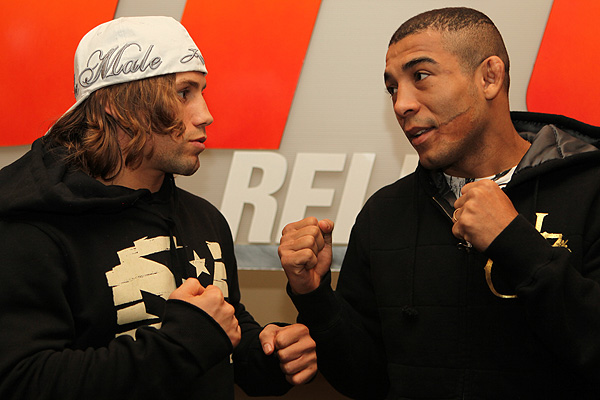 
In a measured and methodical performance, Aldo successfully defended the World Extreme Cagefighting featherweight title and outlined his greatness in crystal-clear detail. He dismissed Faber in the WEC 48 “Aldo vs. Faber” headliner on April 24, 2010 at the Arco Arena in Sacramento, California, where he posted a unanimous decision over the former champion and promotional poster boy. Scores were 49-45, 49-45 and 50-45. The leg kick was Aldo’s weapon of choice, as he exacted an insurmountable toll on Faber’s base with a steady stream of strikes to his lower extremities. The Nova Uniao thoroughbred landed 10 low kicks in the second round alone, a majority of them to Faber’s lead left leg. At one point, Faber had to be carried back to his corner. Aldo nearly finished his counterpart in the fourth round, where he knocked down “The California Kid” with a leg kick, mounted him briefly and attached himself to the challenger’s back. Faber escaped, but when the action hit the floor again, Aldo trapped him in a topside crucifix for nearly two minutes, grinding on him with punches and elbows. Taken the distance for the first time in nearly three years, Aldo seemed content to ride out the decision. Round 5 proved largely uneventful, save for a wicked right hook to the body that left Faber visibly shaken.

« Previous Roosevelt Roberts: Jim Miller Will ‘Bring Out the Best in Me’ Next Matt Hughes Details Recovery Process on Three-Year Anniversary of Train Accident »