Junior dos Santos once stood atop the heavyweight mountain, but like so many others before him, his reign over the Ultimate Fighting Championship’s most volatile division was brief.

“Cigano” burst on the scene with a stunning knockout of Fabricio Werdum at UFC 90 in 2008, won his first nine bouts inside the Octagon and captured the undisputed heavyweight crown. He has remained a key cog in the promotional wheel ever since. However, dos Santos finds himself at a crossroads after consecutive defeats to Francis Ngannou and Curtis Blaydes, and at the age of 36, he has put more than a few miles on the odometer. He will attempt to halt the first two-fight losing streak of his career when he faces Jairzinho Rozenstruik at UFC 252 on Aug. 15 in Las Vegas.

As dos Santos prepares for his showdown with the heavy-handed Rozenstruik, a look at a few of the rivalries that provided substance to his hall of fame-worthy career: 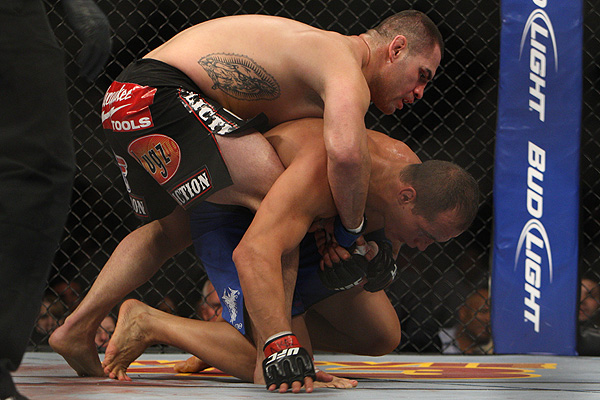 
All dos Santos needed was one punch, and he landed it. The Brazilian cracked Velasquez with a brutal overhand right behind the ear, followed him to the canvas, finished him with a slew of strikes on the ground and captured the heavyweight crown in devastating fashion in the UFC on Fox 1 main event on Nov. 12, 2011 at the Honda Center in Anaheim, California. It was over in 64 seconds. Velasquez, who had undergone surgery to repair a torn rotator cuff the previous January, seemed content to keep the fight standing against the superior boxer, as he tagged dos Santos’ lead leg with kicks and exchanged when the distance between the two closed. A clubbing overhand right countered a left jab from Velasquez, put the champion on all fours and forced him to retreat to his back. He found no refuge there. Dos Santos closed with patience and precision, unleashing first with lefts and ending it with hard rights to the unguarded head of his fallen counterpart.

The two rematches that followed were not as kind to dos Santos, who was on the receiving end of two hellacious beatings from the rejuvenated American Kickboxing Academy ace. Velasquez took a unanimous decision at UFC 155 and delivered a fifth-round stoppage at UFC 166. In those two meetings, Velasquez outlanded dos Santos by a 484-128 margin and attempted 46 takedowns, completing 13 of them. 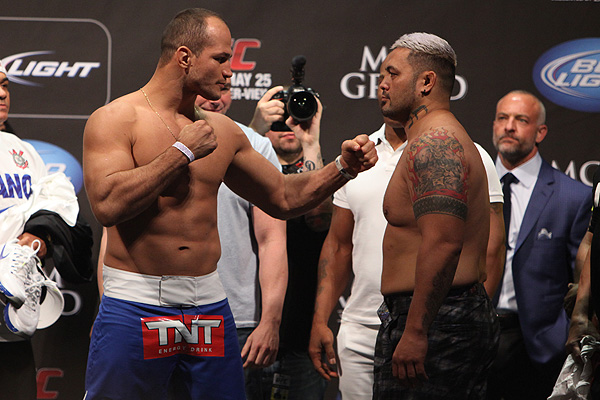 
Dos Santos knocked out the former 2001 K-1 World Grand Prix winner with a sensational spinning hook kick and a follow-up standing-to-ground punch 4:18 into the third round of their UFC 160 co-headliner on May 25, 2013 at the MGM Grand Garden Arena in Las Vegas. The Team Nogueira representative has rattled off 11 wins in 12 appearances. Dos Santos leveled the Kiwi with a ringing overhand right in the first round, paired a series of jabs with a takedown in the second and staggered Hunt with a left hook in the third. He survived more than one encounter with Hunt’s ruthless left hook, the same punch that left Dutchman Stefan Struve with a broken jaw two months prior. The kick came out of nowhere and sent Hunt careening to the canvas. Dos Santos then drove his right hand straight down into his fallen counterpart’s face, briefly separating him from consciousness. With that, Hunt’s four-fight winning streak and unexpected renaissance was over. 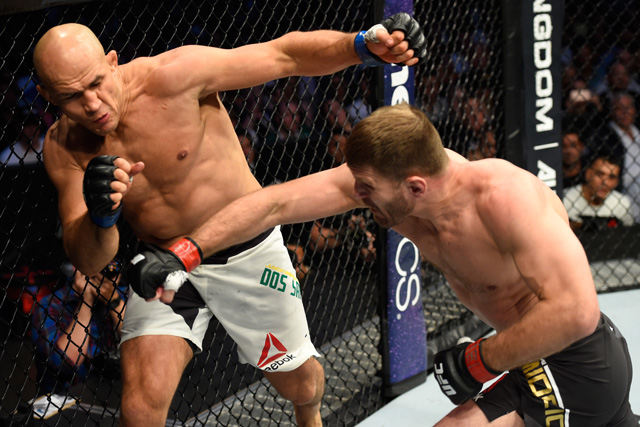 Dos Santos and Miocic each nabbed a victory in the series. (Photo: Getty Images)


After 25 grueling minutes and the exchange of more than 200 significant strikes, dos Santos left the cage battered and bloodied but with his hand raised in triumph. He denied Miocic’s advances in the UFC on Fox 13 main event on Dec. 13, 2014 at the US Airways Center in Phoenix, where he picked up a unanimous decision in a memorable scrap that helped shape the upper reaches of the Ultimate Fighting Championship’s heavyweight division. Scores were 48-47, 49-46 and 49-46, all for the Nova Uniao-trained “Cigano.” Dos Santos connected on 140 total strikes—123 of them were significant—and shut down all but one of the Strong Style Fight Team representative’s 18 takedown attempts in the five-round struggle. The former champion was the statistically superior fighter in the third, fourth and fifth rounds, where he outlanded Miocic by an 87-57 clip and scored the lone knockdown of the bout.

They met for a second time some two years later at UFC 211, with Miocic in the role as favored champion. He needed just 2:22 to dispatch dos Santos with punches and retain his title.