Thiago Santos joined the Ultimate Fighting Championship as an intriguing middleweight who was thought to have a discernible ceiling. Then came the metamorphosis.

After suffering a knockout loss to former two-division World Series of Fighting titleholder David Branch and rebounding with a ho-hum decision over Kevin Holland, Santos in 2018 made the ambitious move to 205 pounds. Free from a burdensome weight cut, he rattled off three consecutive victories, all in decisive fashion against increasingly difficult opposition, and emerged as an unlikely No. 1 contender for the UFC light heavyweight championship. The man they call “Marreta”—Portuguese for “The Sledgehammer”—had been remade.

As Santos awaits his next assignment from UFC matchmakers, a look at a few of the rivalries upon which he built his brand: 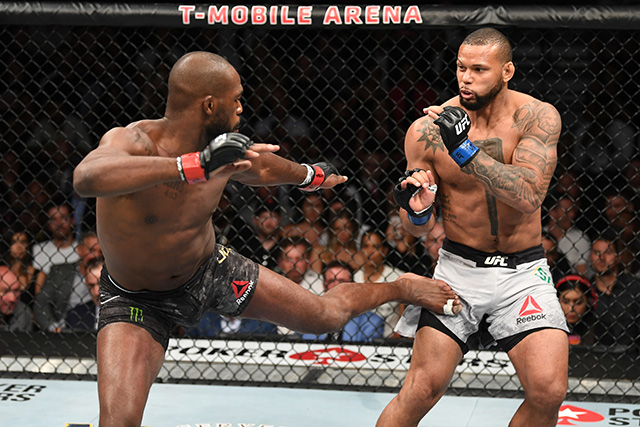 Santos never once looked like he was out of his depth against Jon Jones. (Photo: Getty Images)


Perhaps the gap between Jones and the rest of the light heavyweight division has finally narrowed. “Bones” by the closest margin of his career retained his 205-pound title with a split decision over Santos in the UFC 239 headliner on July 6, 2019 at T-Mobile Arena in Las Vegas. All three cageside judges scored it 48-47: Michael Bell and Derek Cleary for the heavily favored Jones, Junichiro Kamijo for Santos. The Brazilian never once looked like he was out of his depth. He zeroed in on both of Jones’ legs with punishing kicks that resulted in visible damage and kept the champion honest for the better part of two rounds. However, Santos injured his left knee—it was later discovered that he tore multiple ligaments—throwing a kick in an early exchange, and the injury worsened as the fight drifted into the latter rounds. Jones started to impose his will in the third, where he knocked down the challenger with a close-quarters elbow strike and later opened a small cut on his hairline with another. Nevertheless, Santos was undeterred. Jones turned up the heat in Round 4 with a steady diet of leg and body kicks but failed to break “Marreta.” Santos returned fire in the fifth despite his deteriorating condition, met Jones with powerful kicks and flurried on him more than once. His efforts ultimately fell short. 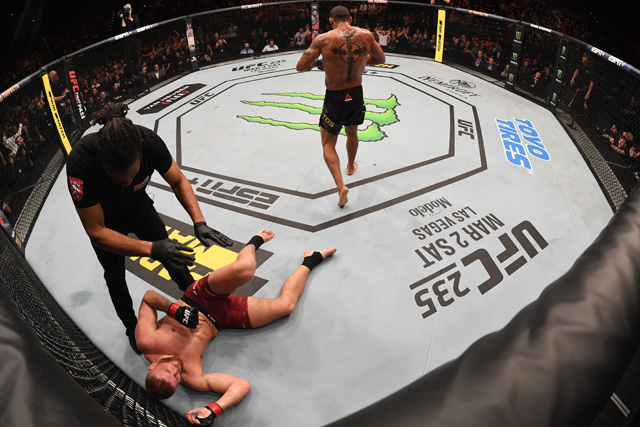 
Santos staked his claim as a legitimate title contender in the light heavyweight division, as he unwound the former KSW champion with a counter left hook and follow-up punches in the third round of their UFC Fight Night 145 main event on Feb. 23, 2019 at the O2 Arena in Prague. Blachowicz wilted 39 seconds into Round 3, closing the book on a four-fight winning streak. The first and second rounds were marked by back-and-forth exchanges, Blachowicz operating behind a piston-like jab and Santos answering with clubbing right hands and kicks to the body and legs. Early in the third, the Pole overextended on an uppercut and left himself exposed. Santos leveled him with a scorched-earth left hook, pounced on his fallen counterpart and delivered a burst of hammerfists from side control until referee Herb Dean had seen enough. 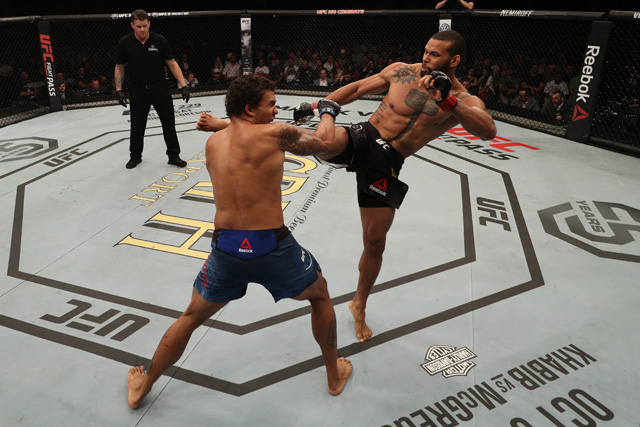 Anders never made it to his corner at the conclusion of Round 3 against Santos. (Photo: Getty Images)


“Marreta” planted his flag in the 205-pound weight class with gusto, as he forced a between-round stoppage against Eryk Anders in the UFC Fight Night 137 headliner on Sept. 22, 2018 at Geraldo Jose de Almeida Gymnasium in Sao Paulo, Brazil. Having been mercilessly battered by close-range elbows, Anders never made it to his corner at the conclusion of Round 3. He collapsed twice on route, prompting referee Marc Goddard to intervene. A short-notice fill-in for the injured Jimi Manuwa, Anders struggled to a maintain a safe distance from the kick-minded Brazilian; and while he managed to execute a handful of takedowns, the former University of Alabama linebacker failed to consolidate them with damage or positional control. In the waning moments of the third round, Santos braced himself against the fence, stuffed a desperate double-leg takedown attempt and repeatedly buried his elbow into the side of his adversary’s head. Anders’ body broke just as the horn sounded, a combination of punishment and exhaustion having conspired against him.

« Previous Martin Vettori on Karl Roberson: ‘I Will Fu-king Hurt Him For Sure' Next Modestas Bukauskas vs. Vinicius Moreira, Two Other Bouts Set for UFC Event on July 15 »