Weili Zhang rocketed to stardom not long after she arrived in the Ultimate Fighting Championship, transforming herself from prospect to contender to champion in a little more than a year.

Since she was outpointed by Meng Bo in her first professional appearances in November 2013, Zhang has put together a remarkable 21-fight winning streak that includes 17 finishes. The 5-foot-4 strawweight joined the UFC roster as part of the promotion’s continuing effort to make inroads in her native China, took a unanimous decision from former King of the Cage champion Danielle Taylor in her organizational debut and never looked back. Now a consensus Top 5 pound-for-pound fighter, Zhang has the look of a woman who could enjoy an extended reign at the top of the 115-pound weight class.

As Zhang awaits word on her next title defense, a look at a few of the rivalries that made her unexpected rise possible: 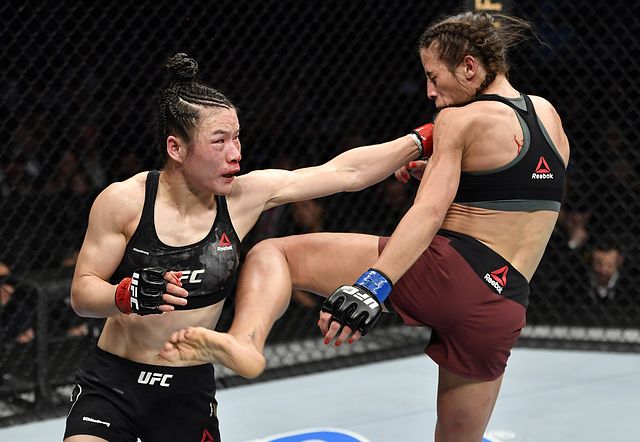 Zhang outlasted Jedrzejczyk in an immediate contender for “Fight of the Year.” (Photo: Getty Images)


“Magnum” retained the undisputed women’s strawweight championship in the UFC 248 co-main event on March 7, 2020, as she outlasted Jedrzejczyk in an immediate contender for “Fight of the Year.” After champion and challenger brought remarkable savagery and skill to their epic 25-minute battle, Zhang emerged with a split decision—48-47, 47-48, 48-47—and walked away with her 21st straight win. The two women combined to land 366 total strikes, 351 of which were deemed significant. Jedrzejczyk exited the cage with a massive hematoma that stretched from one side of her forehead to the other, the damage the result of multiple blows from the heavy-handed Zhang. 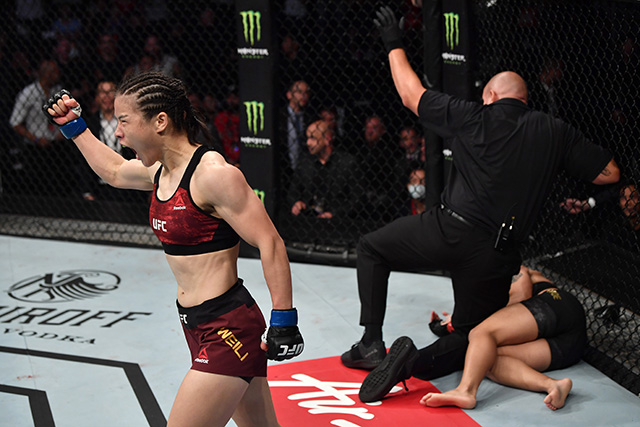 
Zhang became the first Chinese mixed martial artist to strike Ultimate Fighting Championship gold, as she put away the Brazilian with punches, elbows and knees to capture the undisputed women’s strawweight crown in the UFC Fight Night 157 headliner on Aug. 31, 2019 at the Shenzhen Universiade Sports Centre in Shenzhen, China. Andrade met her end 42 seconds into Round 1, her brief reign atop the 115-pound weight class over after just 112 days. The 30-year-old Black Tiger Fight Club turned the Brazilian’s overzealousness against her, answering her aggression with overwhelming speed, precision and power. She connected with 29 significant strikes: 16 to the head, seven to the body and six to the legs. Zhang clipped the oncoming Andrade with a crisp right hand, welcomed her into the clinch and assaulted her with standing elbows before unleashing a torrent of rapid-fire knee strikes. The reeling champion retreated, ate a few more punches and collapsed at the base of the cage. 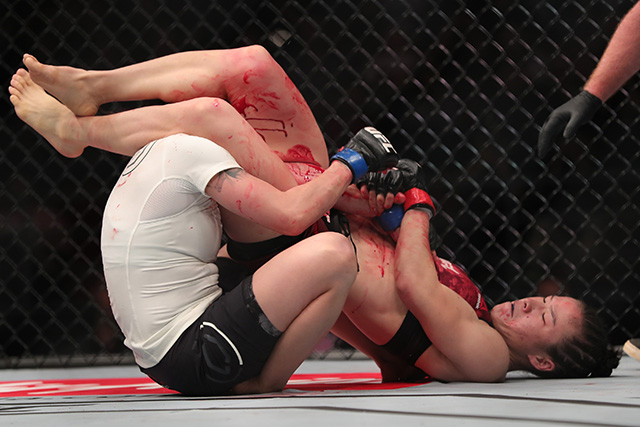 Zhang busted up Aguilar and then put her away in the first round. (Photo: Getty Images)


It was a sign that the UFC had something special on its hands. Zhang submitted the former World Series of Fighting champion with an armbar in the first round of their UFC Fight Night 141 undercard battle on Nov. 24, 2018 at the Cadillac Arena in Beijing. Aguilar surrendered 3:41 into Round 1, as he was finished for the first time in more than a decade. Zhang cut the American Top Team product on the left side of the forehead with a clinch elbow, executed a takedown and grinded away from side control. She then locked up a triangle choke, battered the bloodied Aguilar with slashing elbows from the bottom and transitioned to the armbar, eliciting the tapout.

« Previous An Eye on Immediate Vindication Next Janaisa Morandin vs. Montserrat Ruiz to Headline Invicta FC 41 on July 30 »