When Ben Rothwell debuted in Affliction back in July against Andrei Arlovski, it was a chance for the recently christened top-10 heavyweight to cement himself among the upper echelon in his division. But in the third round Rothwell fell victim to an Arlovski knockout, leaving the Miletich Martial Arts fighter with a lot to improve upon for his next bout.

“I’m just really disappointed in how I performed,” Rothwell told Sherdog Radio Network’s “Beatdown” show on Wednesday. “People were saying I was in there for three rounds and this and that. It was great and I’m glad I was able to show that I at least belong there. I certainly didn’t get to show where I feel I’m at or how much more I have to show. But just that fight alone, to see where my skills have gone in the last 4-5 months, all my coaches have noticed and said something.”

Those skills will be on display next not for Affliction, but for the latest installment of Adrenaline MMA, the promotion owned and run by his manager Monte Cox. Rothwell (29-6) is set to fight Chris Guillen, a far cry (at 13-11 overall and on a four-fight losing streak) from the step up in competition he took fighting former UFC champion Arlovski. But such is life for a fighter not making his living inside the UFC’s acclaimed Octagon.

“I’d love to fight tough guys again but it’s hard,” Rothwell said. “It’s hard to get fights and I’m fighting tomorrow night just to stay active. I’ve got to fight so I can fight and show everybody what I can do.” 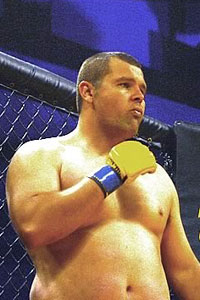 Jeff Sherwood/Sherdog.com
Rothwell will set his
sights on Chris Guillen
(pictured) Thursday.
“It’s actually more of a threat because you don’t want to make mistakes against a guy like that,” said Rothwell. “The big joke in the IFL was whoever had to fight Wojtek Kaszowski, who was 0-7. The guy was 0-7, but who wants to lose to that guy? It’s the same thing here. I’m putting myself out there but I have to do it.”

As for not fighting on the next Affliction card, Rothwell’s expectations have always been a bit tempered.

“They’re not using me in January for multiple reasons I guess,” Rothwell said. “The word is that they’re going to do a third show and I’m supposed to fight on that. I’ve always been a guy that never counts his eggs before they’re hatched. I mean they say it and that’s great that they say it at least. But it doesn’t mean anything to me until I’ve signed a contract or I see my face on the poster.”

Rothwell wasn’t expecting his publicized exit from the IFL in 2007 prior to their grand prix, where individual title belts were to be awarded to each division’s winner in a tournament format. With the grand prix fights not a part of the original contract Rothwell signed, the IFL tried to renegotiate with their star heavyweight –- who was 9-0 for the promotion -- beforehand.

“They came to me, [owner] Kurt Otto even and, he did a lot of good things and I’m not trying to talk bad about him, but this particular situation with his negotiation was just a bit off,” Rothwell said. “I just wasn’t having it. My last fight I made ‘x’ amount of dollars for the finals against Ricco Rodriguez. Now I could’ve won both fights in the grand prix and barely made a little bit more than I did in that fight against Ricco. Does that make any sense to you? I asked Kurt that and I said, ‘What are you doing? Why would you do that to me?’ And he goes, ‘Ben, the belt! Think about the belt.’ I don’t give a f--- about the belt.”

The relationship between fighter and promotion quickly began to unravel.

“Basically after that happened that was pretty much the end of it,” said Rothwell. “Then management and him didn’t see eye to eye and then they tried to redo things and I was just ready to move on. I was insulted. I felt like I fought my ass off for those guys and that was my payment? To come and fight for that? What did I do wrong? So it was just better off that way. I always wished them the best. I didn’t want to see them fold. There were a lot of guys who were getting jobs and able to fight. I always thought the more MMA the better. They just made too many mistakes and when they brought [Jay] Larkin in that was the end.”

Even with the troubles of the IFL behind him, Rothwell still has problems getting fights consistently given Affliction’s issues. But Rothwell’s goal as a fighter remains the same.

“I was either going to on a top-10 list and be looked at as one of the best or fall by the wayside and be a nobody and that’s not what I want,” said Rothwell. “I want to eventually work my way to the top. I’m one of the youngest on the list so I have that at least. But I’m not getting any younger. So just each fight from here on out I’ll show something to everybody so you can see me improving just like all the other top fighters. That’s what I’m going to keep doing.”