NAGOYA, Japan -- Though he promised a groundbreaking performance, Japanese grappling ace Shinya Aoki was handily dispatched by Hayato Sakurai in the Dream 8 main event on Sunday at Nippon Gaishi Hall.

Motivated by more than three years of bad blood and a vicious war of words before the bout, the Sakurai of old charged at Aoki once the bell rang. Aoki (20-4, 1 NC) ducked under a lunging hook, slipped an arm under Sakurai and used his momentum to flip him onto his back. “Mach” powered his way to his knees, however, and forced Aoki’s head to the mat. Sakurai launched two knees, instantly melting Aoki, and followed up with two more for good measure.

As Aoki lay unconscious between the ropes, Sakurai (35-8-2) blasted him with three rights hands and a left before referee Daisuke Noguchi lunged in for the save 27 seconds into their welterweight grand prix match.

Just before Sakurai stomped Aoki in less than half a minute, Jason High barely broke a sweat in dispatching Yuya Shirai by rear-naked choke in their welterweight tournament bout.

Flying in with a missed right uppercut, High (7-1) followed with two hard left hooks that smashed square into Shirai’s face and sent him to the mat. High rode Shirai’s back for a moment, as he punched to the head before sinking his arms for the choke. Shirai (15-8) feebly punched behind him in defense, but the retaliation soon died down as the Japanese fighter went to sleep, prompting referee Kenichi Serizawa to call the bout at the 59-second mark.

In another of the four welterweight tournament matchups, Marius Zaromskis proved too good on the feet for Seichi Ikemoto, who spent the better part of their fight playing the Cage Rage veteran’s game. 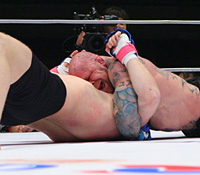 Daniel Herbertson/Sherdog.com
Jeff Monson easily submitted
Sergei Kharitonov.
Though Ikemoto attempted to bring the bout to the ground, Zaromskis defended well, as he sprawled or quickly powered his way back to a standing position when his opponent’s attempts succeeded. As a result, Zaromskis (9-2) banged up Ikemoto with big punch-to-kick combinations; the Pride Fighting Championships veteran threw push kicks and singles to keep the Lithuanian at bay. The “new technique” at which Ikemoto hinted previously was apparently a double-handed punch, which proved ineffective against the dynamic Zaromskis. Aside from rocking Ikemoto (18-15-5) with punches and high kicks, he impressed the crowd with a backward somersault double knee attack on his prone foe. All three judges saw the bout for Zaromskis.

Meanwhile, John Alessio held his own standing against welterweight grand prix opponent Andre Galvao, as he snapped off crisp jabs and one-two combinations; Galvao responded with tight hooks and grazing high kicks of his own.

However, once Galvao captured Alessio’s back, it marked the beginning of the end for the World Extreme Cagefighting and UFC veteran. Pounding the sides of Alessio’s head as the Canadian bent forward to defend the choke, Galvao switched to the armbar when the opening availed itself. Alessio (24-13) looked to escape by flipping over Galvao and attempting to spin out of the submission. Alessio’s close proximity to the ropes foiled his efforts, however, and he bounced back onto the canvas. The unbeaten Galvao (3-0) then stretched out Alessio and forced the tapout at 7:34 of the first round.

In the lone featherweight tournament match at Dream 8, Daiki Hata fought a tense, controlled battle against Hideo Tokoro and edged the Gifu native by unanimous decision in front of his hometown crowd.

The action went back and forth on the feet in the first period. Hata (11-5-3) scored with the better shots, as he dropped Tokoro, assaulted him from the top and racked up damage points. The second stanza was no different, as Tokoro (21-16-1) continued in typical fashion, shooting for flashy, high-risk maneuvers like the flying knee and scissors takedowns. Hata defended well, however, and put hard leather on the grounded Tokoro until the bell. All three judges ruled in Hata’s favor.

Elsewhere, Jeff Monson made quick work of top Russian heavyweight Sergei Kharitonov, as he submitted him with a North-South choke in less than two minutes.

Kharitonov (16-4) defended Monson’s early takedown attempt, but the American drove forward for the single-leg and eventually captured side mount. From there, Monson transitioned to the North-South position and locked up the choke. Kharitonov pounded away at Monson from the bottom, but the punches soon turned to taps, as the Russian’s face began to change color. The end came 1:42 into the first round. Monson (30-8) has won three times in as many weeks. 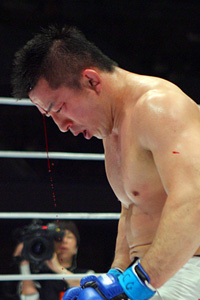 Daniel Herbertson/Sherdog.com
Blood poured from the
face of Katsuhiko Nagata.
Though he came in as a late replacement for Dong Sik Yoon, Riki Fukuda was more than a handful for former EliteXC middleweight champion Murilo Rua.

Aggressive in the first round, the southpaw lit up Rua with short, crisp punches. “Ninja” survived, however, and returned the favor, as he smashed away at the Deep veteran with hard punches, body kicks and knees after Fukuda (14-4) gassed in the second half of round one. Fukuda paced himself better in the second period and waited for the perfect opportunity to batter Rua with big punches; Rua (16-10-1), meanwhile, pecked away at Fukuda’s lead leg with low kicks. Fukuda made his breakthrough in the final minute, as he shellacked Rua with a barrage of punches that kept the Brazilian dazed until the bell sounded. All three judges scored the match for Fukuda.

Tentative on his feet, Vitor Ribeiro turned on the afterburners once he got Katsuhiko Nagata to the floor. Running a grappling clinic on the Japanese wrestler, “Shaolin” dropped punches between transitions from one dominant position to the next. From side mount, Ribeiro (20-2) racked up the hammer punches before launching two big knees to the side of the K-1 veteran’s head, opening a gash that had Nagata (4-5-1) leaking blood like a sieve. The referee called the bout, ending it 7:58 into round one.