Diego Sanchez debuted at 155 pounds with a win Saturday at the O2 in London.

The former welterweight contender looked good as a lightweight en route to earning a unanimous decision over Joe Stevenson in the UFC 95 main event.

The fight played out mostly on the feet, where Sanchez, 27, had the better, more versatile attack. He punched in combinations, going upstairs and down, and also mixed in kicks and knees. Stevenson landed some strikes as well, but he generally seemed a step behind.

Sanchez’s best combination came in the first. Out of his southpaw stance, he threw a left to the body and followed with a right uppercut. Stevenson was hurt but recovered quickly.

In the second round, Stevenson, 26, of Victorville, Calif., tried to wrap up a guillotine, but Sanchez slammed him and escaped. The third period was close but couldn’t have made up the difference for Stevenson even if he had a slight edge.

In the welterweight opener, Paulo Thiago stunned Octagon veteran Josh Koscheck with punches for a TKO at 3:29 of the first round. 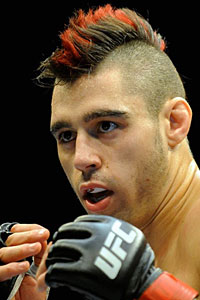 File Photo
Dan Hardy's star continues
to rise in the UFC.
The bout was Thiago’s first in the UFC. A 28-year-old Brazilian jiu-jitsu black belt, he looked shaky on his feet but made up for it. Koscheck clocked him with an overhand right early and stalked him around the cage. When Koscheck stepped in with a jab midway through the period, though, Thiago countered with a right uppercut and a left hook. Koscheck dropped, and referee Marc Goddard stopped the fight.

Nate Marquardt moved a step closer to another middleweight title shot by stopping Wilson Gouveia at 3:10 of the third round.

Marquardt, 29, fighting out of Denver, mixed kicks to Gouveia’s legs with punches to his body early. Gouveia flurried at times, but the way he plodded forward left him open to takedowns and right hands. Those rights kept prompting Gouveia to duck -- a mistake Marquardt capitalized on again and again with knees.

The end came after Marquardt connected with a straight right and a jumping knee. Gouveia reeled back into the cage, and Marquardt cut loose on him with punches, kicks, knees and a spinning backfist. Finally the abuse sat Gouveia down, and the bout was called.

Marquardt said his performance “definitely” warranted a fight with Anderson Silva, who stopped him in the first round when they met in July 2007.

“It’s not going to be a rematch because the Nate you saw tonight is not the Nate that fought for the title,” Marquardt said.

Demian Maia also staked his claim for a title shot by scoring his fifth submission victory in as many UFC bouts. He tapped Chael Sonnen with a triangle choke 2:37 into the first round of their middleweight bout.

Sonnen had stifled Maia’s bottom game early. After standing up, however, Maia threw the former U.S. Olympic Greco team alternate with a lateral drop and quickly moved into a triangle mount on the ground. Maia, 31, of Sao Paul, Brazil, then rolled to his back and locked up the choke for the win.

“I think now I deserve the title shot,” Maia said. “That’s what I want to do: I want to show jiu-jitsu to the world and show the people that you can win the title without hurting your opponent.”

Nottingham, England’s Dan Hardy delivered a quick knockout for the U.K. fans. Rory Markham, 26, from the Miletich camp in Bettendorf, Iowa, tried to take off Hardy’s head with an overhand right.

The punch left Markham wide-open to a counter, and Hardy didn’t hesitate to launch a left hook from his hip that floored him. Referee Kevin Mulhall stopped the bout at 1:09 after some additional strikes on the ground.