LEMOORE, Calif. -- Defending PFC bantamweight champion Shawn Klarcyk did not find a way to keep his title Thursday at PFC 12 “High Stakes” inside the Tachi Palace Hotel and Casino. Challenger Jeff “Little Popeye” Bedard staved off whatever the dynamic submission artist threw at him and caught Klarcyk is a North-South choke at 2:40 in the third round.

Klarcyk repeatedly looked for kneebars and ankle locks throughout, but Bedard easily defended, keeping his knee bent while pounding away on Klarcyk’s head.

Klarcyk made it obvious from the start that he did not want anything to do with Bedard on the feet, which did not bother the challenger at all and worked to his advantage in the end.

Former PFC lightweight champion and UFC veteran Diego Saraiva dropped down to featherweight to snatch the gold away from reigning champ Jorge Evangelista with a rear-naked choke finish at 2:39 in the second round.

Evangelista came out on top in a close first round. He was the more aggressive of the two in a round that seemed to be mostly a feeling out period. But round two was all Saraiva.

“The Octopus” lived up to his nickname when he dragged the champ to the mat, wrapped him up, took his back, and locked in the finishing move. Evangelista tried to counter by slamming them both on their heads, but it was to no avail and he submitted. 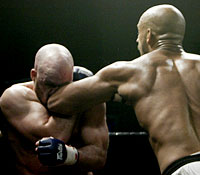 Jeff Sherwood/Sherdog.com
Cyrille Diabate cracks Lodune
Sincaid with a standing elbow.
When the fighters rose, the former champ’s left eye was swollen shut and Saraiva had blood running down his face from a cut on his forehead. The win improves Saraiva’s record to 13-8-1.

Wipf had the champ caught in a nasty armbar for most of the first round. Somehow Cobb managed to roll and keep his arms locked together for almost the entire round before being saved by the bell.

The second round lasted only 1:17. Cobb immediately slammed the challenger, landing in side mount. The Bakersfield native then quickly transitioned to back control and sunk in the tap-inducing rear-naked choke, a move that has earned him eight of his ten submission victories.

Cobb admitted the fight almost ended in the first.

“That armbar was tight,” he said. “He’s good all around, but I’ve fought good grapplers before.”

Olaf Alfonso and Jeremiah Metcalf met to vie for the interim welterweight title, which was just vacated by Bakersfield’s Bryan Travers, and Alfonso dispatched Metcalf a mere 1:38 into the first round.

The bout was exciting from the bell, as Alfonso sprinted across the ring and attempted a flying knee-punching combo that allowed Metcalf to slam him to the mat. That’s when the crafty veteran slapped on an armbar that Metcalf slammed his way out of. Alfonso had another armbar waiting for Metcalf once they hit the canvas for the finish. 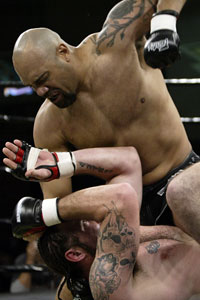 Jeff Sherwood/Sherdog.com
Lavar "Big" Johnson was
too much for Dave Huckaba.
Diabate dominated the striking exchanges, cutting Sincaid in round one and dropping him with a vicious head kick right at the buzzer. Sincaid answered the bell for round two, but the ref called time out to have Lodune’s cut checked after 75 seconds of action.

IFL veteran John Gunderson made his promotional debut against Alexander Crispim and earned a close split decision in an uninspiring performance.

Undefeated Strikeforce veteran Billy Evangelista also seemed off his game, though he pulled out a unanimous decision against 33-fight veteran Harris Sarmiento. Sarmiento seemed content to just clinch in the corner and stifle Evangelista’s striking, which led to his demise.

In other bouts, Xavier Foupa-Pokam destroyed Kyacey Uscola with a knee to the body that left him doubled up and rolling around in a corner at 2:06 of the first round.

Heavyweight Lavar Johnson TKOed Dave Huckaba, whose corner decided he should not answer the bell for round two.

Phil Davis stopped Josh Green in just 1:49 with strikes, while Michael MacDonald earned a first-round stoppage over Jason Georgianna at the 2:38 mark.

A scheduled 125-pound championship bout between Rambaa Somdet and Pat Runez was cancelled a few hours before the event, after Somdet withdrew due to injury.