When watching a Sengoku Raiden Championship event, one has to decide whether to see the glass as half empty or half full. Critics claim the promotion has become a watered-down version of Pancrase, but its supporters believe the Japanese league needed to take a breather and shift gears until it creates new domestic aces that will generate interest in Sengoku for years to come.

For all the diehards sticking by the linear successor to Pride Fighting Championships, here are five questions that might be answered at Sengoku 15 on Saturday at the Ryogoku Kokugikan in Tokyo.

How much has Izumi improved?

It’s no secret that Sengoku officials are trying to turn 2005 judo world champion Hiroshi Izumi into one of the faces of the organization. Similar to 2008 Olympic gold medalist Satoshi Ishii, Izumi has struggled to live up to expectations. In his MMA debut, he was stopped by New Zealand born kickboxer Antz Nansen, who had been hand-picked to get Izumi’s in-ring career off the ground.

Even though Zikic botched his final rehearsal against hard-hitting Welshman John Phillips, the 33-year-old London Shootfighters representative is well-rounded and went the distance with Fabricio Werdum, Jeremy Horn and Vitor Belfort.

Izumi scored his first career knockout in his third career bout -- a clear indication the judoka has worked on his hands. Have those hands come far enough to prevent him from being exposed by Zikick, a former professional boxer?

Has Yokota picked up some wrestling?

Ten months have passed since Kazunori Yokota, a 2008 Sengoku lightweight grand prix finalist, last stood inside a ring. During his last fight on New Year’s Eve, the Grabaka standout was thoroughly controlled by former Shooto champion Tatsuya Kawajiri en route to a unanimous decision. The “Crusher” used his wrestling pedigree to grind out the win. Wrestling skills, or his lack thereof, also resulted in Yokota’s defeat to Satoru Kitaoka in the lightweight grand prix two years ago.

In matching him with former Cal State Bakersfield wrestler Brian Cobb, Sengoku sends a clear message to its fighter to work on their weaknesses. Did Yokota spend the past 10 months feasting on Sukiyaki and Teriyaki, or did he hit the mats to add some top-notch wrestling to his already formidable grappling chops? Time will tell, as Cobb poses a dangerous challenge. 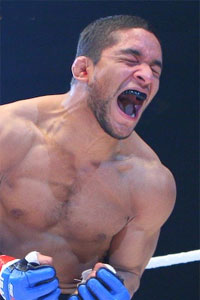 File Photo
Maximo Blanco
Venezuelan wrestler Maximo Blanco seems to be the premier foreign ace on the Sengoku roster. The Yoshida Dojo product mixes excellent takedowns, slams and scrambles with the vicious power in his hands. Those traits have made him one of the sport’s top prospects.

Blanco’s power, however, will be put to the test when he takes on 66-fight veteran Kiuma Kunioku. The two-time, two-division King of Panrcase carries a major trademark into the ring. He has proven nearly impossible to knockout. In fact, Kunioku has not been KO’d since Nate Marquardt did the honors with a flying knee in December 2002.

Can Blanco keep alive his streak of four consecutive knockouts against the wily veteran?

Will Wada stop flying under the radar?

Takuya Wada, a 32-year-old grappler, remains one of the most underappreciated skilled welterweights in the Land of the Rising Sun. The SK Absolute fighter has enjoyed decent careers in the Shooto and Pancrase promotions. Wada won the welterweight King of Pancrase crown in 2008.

Undefeated in his last 10 fights, Wada will face UFC veteran Keita Nakamura. The UFC experience may have come too soon for “K-Taro,” who lost all three of his bouts inside the Octagon. A training partner of the world-ranked Yushin Okami, he has regained his form since receiving his pink slip from the UFC, winning three of his next four fights.

Still only 26, Nakamura, a Tokyo-based submission specialist, was the pre-tournament favorite to win the Sengoku welterweight grand prix. Even with his wealth of experience, he cannot afford to underestimate Wada. After losses to Jorge Santiago and Carlos Condit, Wada needs a win over a prominent opponent to perpetuate his name in the Kakuto history books.

Does the Enomoto success story continue?

One of Sengoku’s top foreign imports, Yasubey Enomoto, a Swiss-Japanese-Peruvian hybrid, remains a largely unknown commodity, even to avid followers of the European MMA scene. The younger of the two Enomoto brothers, he raised more than a few eyebrows when he knocked out Grabaka boss Sanae Kikuta in June to earn a slot in the Sengoku welterweight grand prix.

Once in the tournament, the Zurich, Switzerland-based welterweight hit the ground running with a second-round bulldog choke submission against young Japanese striker Kenta Takagi in the quarter-finals. His grace period as an exotic bird now over, Enomoto will face Taisuke Okuno in the semi-finals.

Okuno wields three times the experience of Enomoto and enters the match riding the hottest streak of his six-year career. In his past three appearances, the 33-year-old has scored knockouts against Masaki Konishi, former Deep champion Hidehiko Hasegawa and UFC veteran Nick Thompson.

Enomoto will need to be on top of his game, striking and grappling, to make it past a durable roadblock and set up a potential dream final with Nakamura.