FRESNO, Calif. –- Ken Shamrock submitted Ross Clifton in a minute flat at Wargods and Ken Shamrock Productions “Valentine’s Eve Massacre” on Friday at the Selland Arena. Shamrock secured the tapout-inducing armbar from side control after flooring Clifton with a clean right hand seconds into the bout.

Clifton, who weighed in at a whopping 380 pounds, towered over the much smaller Shamrock, who tipped the scales at 205 pounds. In a flashback to the early UFC events where Shamrock made his name, the size advantage didn’t help Clifton at all.

After connecting with “The Grizzly,” Shamrock softened his oversized foe with hammerfists before transitioning to the finish.

The win sets up a potential showdown between Shamrock and another Octagon veteran, David "Tank" Abbott –- also victorious tonight -- in April. The pair have been mentioned together often, but a standoff has yet to come to fruition.

“Fifteen years I’ve been waiting to fight somebody. For some reason it didn’t happen,” said the 45-year-old Shamrock. “Tank, if you come in like you did tonight, I’m going to end your career.” 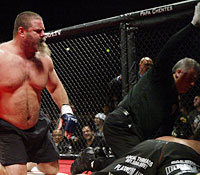 Jeff Sherwood/Sherdog.com
Tank Abbott put a quick
beating on Mike Bourke.
Keeping hopes for that bout alive, Abbott made short work of Mike Bourke in their heavyweight tilt, knocking him senseless in just 29 seconds. Abbott, 43, surprised no one by coming out swinging for the fences. It didn’t take long for him to land his famous right, which clipped Bourke’s neck and left him face down on the canvas.

“I really wish it was Ken Shamrock that ran into one of these,” said Abbott afterward, raising a fist in the air. “I’d like to give him the same payment. And to the fans, drink a beer for me.”

Mike Moreno avenged a Feb. 2008 loss to Gary Padilla with a unanimous decision victory in their rematch. The fight may have gone the distance, but it was not close. All three judges saw the bout 30-27 in Moreno’s favor.

Rick Reeves became the first fighter of the night to finish his opponent, as he forced Nate James to tap out with a tight rear-naked choke at 2:07 of the third round.

After the fight, De Jesus announced his plans to drop to the 145-pound division, even though his record remains perfect as a lightweight.

Josh Haynes, of “The Ultimate Fighter” fame, pressed the pace and controlled the action for a split decision victory over Rafael Del Real.

Haynes was the aggressor throughout the fight, pressing the action and complaining as his opponent constantly backpedaled and even turned to run away on several occasions. Haynes was apologetic for the slow pace of the fight.

“I want a guy who will come in here and bang with me. Sorry,” Haynes told the audience. 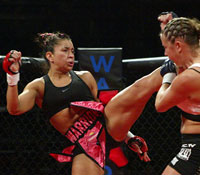 A heavyweight bout between UFC veteran Wesley "Cabbage" Correira and Buddy Roberts was cancelled on-site after the Hawaiian withdrew last-minute.

Correira had a laundry list of grievances with the promotion, including a lack of per diems, spotty transportation for the fighters, and no notice regarding flights to and from the event.

Correira said the final straw came when a CSAC official told him at the arena that half of his show purse was to be subtracted to cover his medical testing –- something Correira said had not been negotiated beforehand between fighter and promotion.

“If I knew they were they were going to take it out, I could have done my own medicals much cheaper,” said Correira.