By age 20, the average person has endured eight to 12 years of schooling, may have done some world traveling and might have had a first go at working life; men likely have discovered a draft letter in their mailbox. When Alan Omer rises at six in the morning to pick up the first kids and drive them to school as part of his national service work in Germany, the tough times through which he has perservered remain hidden to most.

Omer was born in Arbil, Iraq, on Sept. 14, 1988, as a cold wind blew through the country. The Iran–Iraq War ended a month before his birth. Instead of growing up in sheltered circumstances, he was not allowed to go to the playground often. He also woke up at night, fearing his friends would be taken away from him. Those fears came true in 1990, when the Gulf War broke out.


Advertisement
“My father had just finished his degree in medicine studies when he was drafted into the Iraqi army,” Omer says. “He was posted as an army medic on the Kuwait border. Soon, it was obvious that it was impossible to win the war. Because of the large number of casualties and the pointlessness of this war, his unit dissolved. Eventually, all men who fled were accused of desertion and sentenced to death. My dad was in Saddam [Hussein]’s black book, which was also the reason my parents fled Iraq.”

The Omer family ultimately escaped to Germany. After seemingly endless weeks at a refugee camp, the young couple and their 4-year-old son came to rest in Stuttgart, the capital of the state of Baden-WÃ¼rttemberg in the southern part of the country.

“Fortunately, I didn’t have big difficulties to adapt to my new home,” Omer says. “Of course, I had to learn the language first, but besides that, I got along well and settled down quickly.”

Curiously, he did not get involved with martial arts at a young age, contrary to some of the more prominent migrant children in Europe, like Gegard Mousasi and Siyar Bahadurzada. Instead, it more or less fell into his lap.

“A friend took me with him to training. That was back in 2005,” Omer says. “At first, I wasn’t really interested in it. That suddenly changed after my first fight. I was hooked immediately.”

The hybrid fighter, who mixes a flexible ground game with explosive striking, started off fighting in smaller shows in southern Germany. He soon discovered he had a knack for competing in multiple fights in one night, winning both the Gods of War and the Free Fight Association lightweight tournaments in 2007 and 2008, respectively. He also medaled at a number of grappling and jiu-jitsu competitions he entered.

Despite living a normal life in Germany, his homeland did not let go of him. 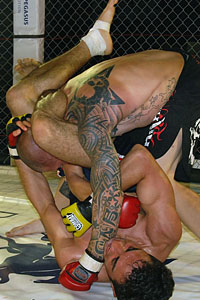 Sandra Leidecker/Sherdog.com
MMA fell into Omer's lap.
“After the Iraq War was over, I wanted to visit the rest of my family in Baghdad,” he says. “Contrary to what we were told in the media, the city was in a state of emergency. Every day you heard explosions of suicide bombers, and frequently you could see dead bodies roadside. It was possible to get caught in the crossfire at any time. After just two days, I had to leave Bagdad and return to the peaceful north.”

“I would lie if I said that all of this had not left any marks on me, but those experiences have also made me tougher and stronger, which is definitely an advantage in MMA,” Omer says. “I was fortunate to grow up in Germany, but I will never forget my roots. You can say that I am a mix of both worlds -- the modernity and open-mindedness of Germany, as well as the traditionalistic thinking of Iraq.”

Even though his family is not as passionate about the sport, Omer’s love for MMA remains profound. “It is the most brachiated sport there is, comparable to chess,” he says. “It’s all about the right tactic and the right moment. It is the most complete martial art, both technically and physically, but also mentally. What I like best, though, is the sociability and the solidarity between the fighters and the fact that many top fighters are not brutal thugs but genuinely likeable and intelligent people.”

What distinguishes Omer (11-2) from many other fighters at his age is the motivation that drives him to step into the ring.

“I enjoy training, and I really like fighting,” he says. “One-on-one combat is what excites me. You can wake me up at four o’clock in the morning and tell me to fight, and I will be like, ’Where and against whom?’

This attitude has been both a blessing and a curse, as Omer accepted a couple of bouts in the past that were, in retrospect, bad for his career. In December 2007, he fought Alex Wiebe, an aggressive welterweight who choked him out in just a couple of minutes. Last September, American wrestler Anthony Durnell controlled him for three rounds en route to a split decision victory. Both losses came about as a result of Omer’s decision to challenge himself well above his natural weight class.

His last fight came at featherweight for the World Free Fight Challenge organization, one of the biggest and most professional promotions in Eastern Europe. In the Bulgarian capital of Sofia, Omer squared off against undefeated sambo champion Kostandin Tabakov. After training hard for six weeks, the shingle fighter from Stuttgart’s Stallion Cage team -- which also features Greek twin brothers Athanasios and Angelos Zampakikas, as well as experienced head coach Robert Westermann -- was excited and ready to go. Omer finished Tabakov by third-round triangle choke.

“Tabakov was a physically strong and very experienced sambo fighter,” Omer says. “He had been giving me a real run for my money, but I was meticulously preparing for his style and working to exploit his weaknesses. I’m glad it was a real war that the fans enjoyed. It is really awesome that the WFC has invited me over to fight. I’m looking forward to fighting for them again in the future.”

Looking ahead, Omer -- who has already competed in Germany, Luxembourg, Poland and Bulgaria in his young career -- wants to one day make a splash overseas.

“My role models in MMA are Fedor Emelianenko, Wanderlei Silva and Genki Sudo,” he says. “All of them are great champions, and you can learn a lot just from watching their fights. My goal is to become a complete fighter like they are and be signed by a big organization in the United States or Japan.”

To reach lofty goals like those, Omer realizes he must do more than just succeed in the sport; it is equally important to amuse the crowd.