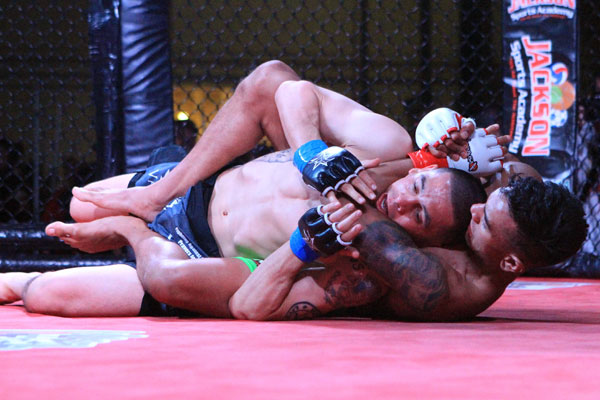 
Fighters will do most anything for the opportunity to fight in the Ultimate Fighting Championship, whether it is pleading their case on Twitter, making a YouTube highlight video or even accepting a short-notice fight they have little chance of winning.

However, featherweight prospect Andre Fili used a most unique tactic to try and get the attention of UFC matchmakers Sean Shelby and Joe Silva. He had planned to move up two weight classes to challenge for a title. Fili, who holds the West Coast Fighting Championship featherweight crown, agreed to move all the way up to 170 pounds to take on WFC champion Max Griffin for the promotion’s welterweight strap on Nov. 16 in an effort to stay busy and generate some buzz.

“Everybody’s reaction was total surprise,” said Fili, who trains at Team Alpha Male in Sacramento, Calif. “I actually asked for the fight. It was a little out of frustration and a little of, ‘Why not?’”

Whether or not it had any impact on Shelby and Silva, Fili’s plan had the desired result. He will replace the injured Charles Oliveira at UFC 166 on Saturday at the Toyota Center in Houston, where he will make his Octagon debut against Jeremy Larsen. The 23-year-old Fili will carry an eight-fight winning streak into the matchup, as he last tasted defeat in October 2010 when he suffered a knee injury in the fifth round of a matchup with Derrick Burnsed.

Even as a young teenager, Fili knew he wanted to go into mixed martial arts. In fact, he wrestled in high school just so he would have a better training base for MMA. 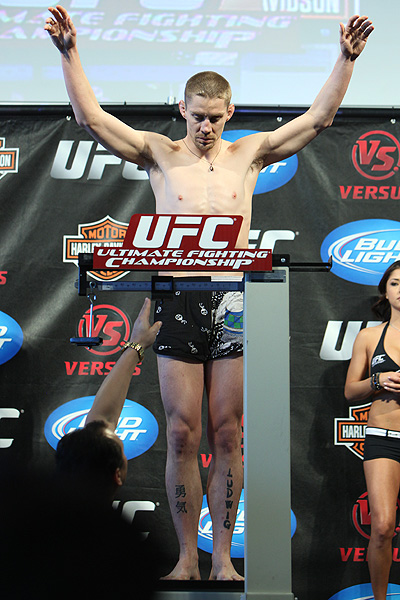 Photo: Dave Mandel/Sherdog.com
Ludwig has made an impression.
Fili made his professional debut in December 2009 with a first-round knockout of Anthony Motley and opened his career with four KOs, only one of which lasted past the opening minute of the fight. That set up the five-round matchup with Burnsed that Fili lost via technical knockout when he injured his knee 1:22 into the final round. Fili said the injury, which sidelined him for a year, was a recurrence of an old ailment he suffered back in high school.

“When I was 15, I tore my meniscus in wrestling in high school, and I stopped wrestling due to that,” Fili said. “After that, I started focusing on jiu-jitsu, but I didn’t rehab my knee as well as I should have. My knee was never 100 percent from that point on. When I took [the Burnsed fight], my knee had been sketchy for four years and was popping out of place once every couple of weeks leading up to the fight; but I really wanted the title and the belt, and that’s what happened. I shouldn’t have fought with it.”

It turned out Fili had re-torn the meniscus in his knee and underwent surgery.

The subsequent rehab kept him out of the cage until October 2011, when he returned with a unanimous decision victory. Since then, he has rattled off six finishes in his next seven wins, the lone exception being a unanimous decision win over veteran Enoch Wilson at a Tachi Palace Fights event in November.

“Having to sit out was really hard,” Fili said. “I was pretty active in my career before [the injury]. I’d had three to four fights in a year, and I wanted to keep fighting frequently. Just before my surgery, I started training at Team Alpha Male. It was special to be a part of them, but as soon as I got there, I had to have knee surgery. Being able to train at Team Alpha Male is a huge step up for my career, but I had to wait to enjoy it. I had to sit and watch these guys because I couldn’t train before my surgery. I had surgery and then I had to wait for my knee to heal up. Now that I’m fully a part of the team, I’m thankful for what I had to go through, even though it was a s---ty experience.”

Under the tutelage of Duane Ludwig and training alongside the likes of UFC mainstays Joseph Benavidez, Urijah Faber and Chad Mendes has not only advanced Fili’s fighting career but forced him to mature as a person.

“It’s pretty incredible,” he said. “I’ve been there a couple of years now and now I look at them like they’re my brothers. I’m close to them like family. When I first got there, it wasn’t like that. To me, it used to be a big deal to be able to train with them. I felt like a lucky fan to be a part of them and I didn’t feel like I belonged. I had to have the knee surgery and was on house arrest due to getting in trouble and doing things pro athletes shouldn’t do. For a while, I had to train with an ankle monitor on, so here I am with all of these great fighters and I have a messed-up knee and an ankle monitor. I’m just a punk kid with a mohawk. Now, I’ve grown up a lot and they’re like my family.”

Ludwig believes Fili has made noticeable improvements in all areas since joining Team Alpha Male.

“Andre’s awesome to work with,” Ludwig said. “He’s a dedicated athlete who’s got all the tools, but he’s not your typical guy. When he first got here, he’d been in a lot of trouble and was hurt. He’s improved a lot in the last year. He’s gotten focused and isn’t [expletive] around as much.”

An innate ability to find ways to win fights is what Fili sees as his strongest asset.

“Lots of guys might be more technical or have more of a pedigree than me, like wrestlers, muay Thai guys or jiu-jitsu practitioners,” he said, “but when I put it all together, I feel like I’m one of the best guys in the world at 145 [pounds]. I’m tough, versatile and dangerous from everywhere. I don’t have that pedigree, but when the pressure’s on, I can put stuff together.”