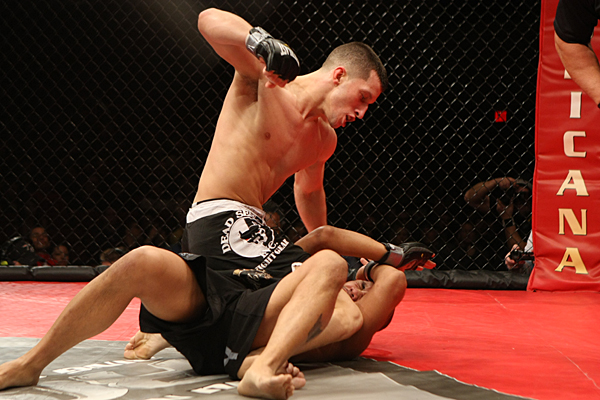 Frankie Perez has secured six finishes, four of them inside one round. | Photo: Keith Mills/Sherdog.com


Most any mixed martial artist despises losing, but for lightweight prospect Frankie Perez, a setback may have been the best thing that could have happened for his career.

The 25-year-old Ricardo Almeida Jiu-Jitsu representative fought Chris Wade for the Ring of Combat lightweight championship in May, losing a split decision at the Tropicana Resort and Casino in Atlantic City, N.J. The once-beaten Wade has since signed with the Ultimate Fighting Championship and needed just 72 seconds to submit Cain Carrizosa in his first Octagon appearance at UFC 177. Perez, meanwhile, joined the World Series of Fighting roster and will make his organizational debut against Tom Marcellino at WSOF 13 on Saturday at the Sands Bethlehem Event Center in Bethlehem, Pa.

“I had a lot of pressure going into my last fight,” Perez told Sherdog.com. “There was a lot of hype about me and him both, but I think after how I performed in the last fight ... I have a loss, but there’s a lot less pressure on me. Now I can show my skills and show the world what I can do.”

After spending his first nine professional fights in Ring of Combat, Perez seems unfazed by his move to the World Series of Fighting.

“There’s always going to be nerves, but I’m more excited than anything,” he said. “I’m just ready to get there, make weight, stay calm and show what I can do.”

Combat sports was not in Perez’s background growing up. However, his decision to attend an MMA event while still in high school forever altered his course.

“I never wrestled, did karate or ever did anything like that growing up,” said Perez, now a brown belt in Brazilian jiu-jitsu. “I never did anything, not even boxing. However, I went to some fights my junior year in high school. One of my teachers was fighting, so I went down there, checked it out and loved it. I found a coach that night and started training the next day.”

Perez made his professional debut in June 2011, tapping Andre Shuler with a rear-naked choke in the first round of their battle at Ring of Combat 36. He slowly progressed from there, recording only one more victory in 2011 and two wins in all of 2012. Perez started 2013 with a perfect 4-0 record and put three more victories in the books, two of them by submission. He started the year with an arm-triangle choke finish on Alfred Walker at Ring of Combat 43, followed it with a unanimous decision over Adam Townsend five months later and closed out the calendar with a rear-naked choke submission against Rafael Fagundes Machado.

Another first-round stoppage, this one against Mike Santiago at Ring of Combat 47 in January, moved Perez to 8-0 overall and set the stage for his 155-pound title clash with Wade, who was 6-1 entering their bout. After three five-minute rounds, it went to the judges. Two of them sided with Wade, giving him a split decision victory and handing Perez his first defeat. Perez claims the fight taught him a lesson and helped him to devise a strategy he plans to soon employ.

“I want to start faster,” he said. “I came out a little too slow early, and I think it hurt me. I didn’t want to totally go all out and have him take me down, so I started out too slow. By the third round of the fight, I was landing some big shots, but it was too late by then. This time, I want to start fast and get right after it.”

Along with a fast start, Perez hopes to utilize more of his standup against Marcellino.

“I feel like I’m one of the most well-rounded guys in my gym,” he said. “I’m good at jiu-jitsu, can box, and in the last year and a half, I’ve been taking advantage of my muay Thai and the kicking game. I’ve been working on that and trying to show that more than anything.”

In Marcellino, Perez faces an opponent who has rattled off three straight wins, including a five-round unanimous decision over Jeremy Ross in his most recent outing under the Reality Fighting banner. Spawned by a Renzo Gracie Jiu-Jitsu affiliate in Latham, N.Y., Marcellino, 30, sports four submissions among his seven professional victories. Perez knows he will have his hands full.

“Camp has been going great and I’m feeling great,” he said. “I’m ready to go, but this is a great matchup. We’re two up-and-coming guys. We both are good at BJJ and like to stand up. I know the guy because he came [to our gym] to train every once in a while not too long ago. I feel like I’ll be competitive in all aspects in the fight.”