“Lyoto invited me to be his sparring partner,” dos Santos said. “It’s been an amazing opportunity for me. He’s one of the best fighters in the world, and I’m learning a lot with him.”

Dos Santos has designs on his own UFC career.

“Fighting in the UFC is the biggest dream of my life, and I think I’m close to reaching that,” he said. “My manager talked to [UFC matchmaker] Joe Silva, and if I get my eighth win in a row, they will probably give me an opportunity.”

The 29-year-old “Mondragon” has never gone the distance in 23 professional fights. He has finished each of his last seven opponents, the past three inside the first round. Dos Santos considers French kickboxer and UFC veteran Cheick Kongo one of his idols.

“He is a black man, like me, and likes the same thing that I like -- exchanging punches,” dos Santos said. “I admire his style very much.”

Dos Santos wowed the Brazilian mixed martial arts community when he stopped Assuerio Silva on strikes in just 61 seconds at Jungle Fight 15 in October. He followed the performance with back-to-back first-round submissions against Douglas Humberto and Fabio Monstro. Mondragon admits he wants another crack at the world-ranked Junior dos Santos, who stopped him on a cut in May 2008.

“He’s not a humble person,” Mondragon said. “He underestimated me, saying he would knock me out in the first round at the weigh-ins. Actually, I knocked him down, but he opened a cut on my eyelid, and the referee stopped the fight. He knows that if the referee had not stopped that fight, I would have won. Today, I’m a completely different fighter. I hope to have the chance to face him again.” 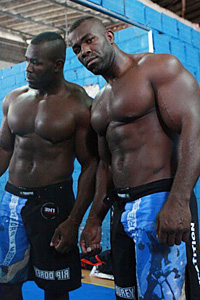 Marcelo Alonso/Sherdog.com
“Mondragon” is a training partner
of UFC champion Lyoto Machida.
The 6-foot-3, 264-pound Brazilian vowed to separate himself from the pack in the heavyweight division.

“I train hard, and my style is to look for the knockout all the time,” he said. “I hope that I can soon prove to the world that I’m not just another one of these freak big guys.”

Mondragon’s manager, Wallid Ismail, confirmed he has made contact with the UFC.

“I told Joe Silva about his seven straight wins, and he got interested,” Ismail said. “Actually, we have a very good relationship with the UFC. I told him that I was planning to have a belt in every category, and Joe even told me it would make it easier for the UFC to pick Jungle Fight fighters. There are many Brazilian fighters in UFC that started in Jungle Fight -- Lyoto, Paulo Thiago, Gabriel Gonzaga -- and I really hope we can maintain that nice bridge.”
« Previous Prospect Sherdog Prospect Watch: Charlie Brenneman Next Prospect Sherdog Prospect Watch: Gunnar Nelson »