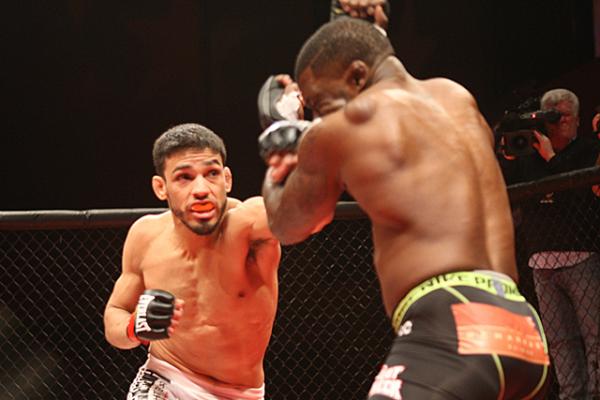 
Unbeaten prospect Julio Arce successfully defended the Ring of Combat bantamweight championship on Jan. 23, but the Team Tiger Schulmann product is doing anything but relaxing.

“I’m just back in training,” said the 25-year-old Arce, who has sports four finishes among his seven professional victories. “From what I’ve heard, a couple of 135- and 145-pound fighters got cut by the UFC. You never know when you might get that last-minute call. I don’t want to be suffering to make the weight if they call me at the last minute. I want to be fight-ready if the UFC gives me a call. I might get a last-minute call or they might want to recruit me. I always just want to be prepared and not miss an opportunity to be able to fight in biggest promotion in the world.”

Arce’s most recent outing produced a third-round knockout of Bellator MMA veteran Thomas Vasquez at Ring of Combat 50. It served as the second defense of the ROC title he won with a unanimous decision over Jason McLean at Ring of Combat 47 in January 2014.

“I thought the fight went the way I wanted it to go,” said Arce, who hails from Queens, N.Y. “I know he had a good ground game, so I kept it standing and used my hands to control the fight. I established my hands and made him scared of standing in front of me. I picked him apart. By the third round, he was tired and couldn’t take me down. I finally took him down and pounded him out. My game plan went the way it was supposed to go.”

With a background that includes muay Thai, kickboxing and a New York Golden Gloves Championship, Arce made his professional MMA debut in July 2012, scoring a first-round knockout on Kenneth Nagle at a Matrix Fights event in Philadelphia. He racked up two wins apiece in 2012, 2013 and 2014 before starting his 2015 campaign with his win over Vasquez.

“I’m pretty comfortable in every aspect of the game,” said Arce, who has emerged as one of the sport’s top prospects at 135 pounds. “My standup is my main thing, but I’ve been working on my wrestling. Before I turned pro, I did boxing, grappling and amateur MMA. All of that has been helping so much, and it’s made me a better overall fighter. I don’t want to be one-dimensional. I’ve had fights go to the ground, and I’ve been comfortable working from there and with my wrestling. Mostly, I like my striking, though.”

Arce returned to training immediately following his successful title defense against Vasquez, a clear sign that he is not content to rely on his current skills to get him to the next level in MMA. He operates out of the same gym that produced onetime King of the Cage and Ring of Combat titleholder Jimmie Rivera, former Bellator champion Lyman Good and “The Ultimate Fighter” Season 17 finalist Uriah Hall.

“My career so far has been great, but after each fight, I sit down and watch it and see what I can do better,” Arce said. “Things have been progressing exactly the way I’ve wanted them to go, but I’ve been pushing myself harder than ever before.”

Arce has won all five of his fights inside Ring of Combat -- the East Coast hotbed that served as a launching pad for reigning Ultimate Fighting Championship middleweight titleholder Chris Weidman and former UFC lightweight champion Frankie Edgar, among others. As for what is on the horizon, Arce expects to remain at bantamweight.

Arce, who does not turn 26 until October, anticipates fighting again in the spring.

“Right now, I’m just training and teaching and I don’t have anything lined up, but I have teammates getting ready for fights and I want to be able to help them out. If something comes up in April or so, I’m sure I’ll take it. I want to be ready to go and be in condition before camp even starts. When I start camp for a fight, I’ll never be starting from day one again where I’m not in condition. I want to be in condition, and then when fight camp starts, I can take it to a different level.”
« Previous Sherdog Prospect Watch: Marcelo Castaneda Next Sherdog Prospect Watch: Ryan Dickson »