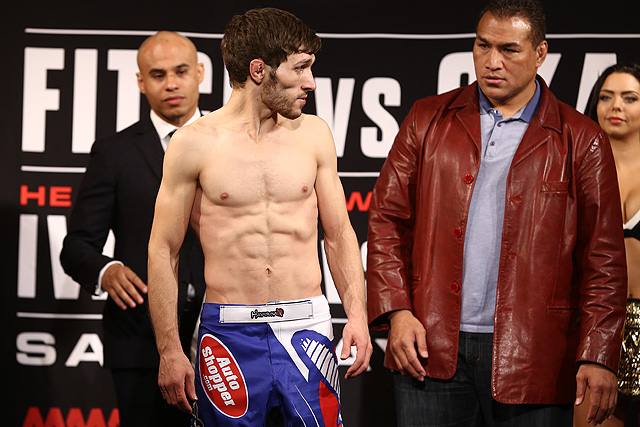 Magomed Bibulatov has finished five of his nine opponents in the first round. | Photo: Dave Mandel/Sherdog


It is not often that a professional mixed martial artist can come into a major promotion and fight for a championship in his or her organizational debut. Yet Magomed Bibulatov will receive just such an opportunity.

The undefeated Bibulatov will meet Donavon Frelow for the inaugural World Series of Fighting flyweight title at WSOF 24 on Saturday at the Foxwoods Resort Casino in Mashantucket, Conn. The 27-year-old Chechen placed an emphasis on preparation leading up to the most significant bout of his career.

“Camp has been going well,” Bibulatov told Sherdog.com through translator Ali Aliev. “Along with training for the fight, I’ve been helping teammates get ready for their fights, so I’m ready.”

The five-round Bibulatov-Frelow clash will be the first of two championship fights on the WSOF 24 docket, along with a heavyweight showdown between defending champion Blagoy Ivanov and Derrick Mehmen. Headlined by a middleweight battle pitting Jon Fitch against Yushin Okami, the event will air live on the NBC Sports Network at 8:30 p.m. ET/5:30 p.m. PT.

Bibulatov and Frelow have unfinished business between them. A native of Grozny, Chechnya, Bibulatov was originally scheduled to face Frelow for the WSOF flyweight crown in August but was forced to exit beforehand. Frelow went on to pick up a first-round guillotine choke submission against Carlos Garcia at WSOF 22. Bibulatov, who sports five finishes among his nine professional victories, foresees no issues moving forward.

“I had to withdraw due to an injury,” he said, “but I’m recovered now and I’m ready to go.”

In his most recent outing on March 14, Bibulatov needed just 90 seconds to knock out Eduardo Felipe under the World Fighting Championship Akhmat banner. “The Gladiator” competed in wrestling and sambo while growing up, turned professional in 2013 and already owns notable victories over current Ultimate Fighting Championship bantamweight Taylor Lapilus and Cage Warriors Fighting Championship veteran Olivier Pastor. Based at the MMA Factory, Bibulatov has trained alongside Karl Amoussou and former Bellator MMA champion Christian M’Pumbu.

While Bibulatov has been viewed as one of the sport’s top flyweight prospects for some time, Frelow has built a strong resume of his own. The Wand Fight Team representative will enter the cage with a spotless 5-0 record highlighted by four submissions. Bibulatov admits he has studied Frelow on film and carries a healthy respect for him: 25- and 68-second armbar-induced tapouts are enough to get anyone’s attention. However, he believes he will prove to be the superior martial artist.

“Frelow is a great fighter,” Bibulatov said, “but everything he does, I do much better and am more efficient at it.”

As soon as he Bibulatov-Frelow fight was finalized, World Series of Fighting President Ray Sefo started to stoke the promotional flames.

“As two of the weight class’ most dynamic stars who have yet to be beaten, Magomed and Donavon have earned their respective places in this historic championship fight,” Sefo said in a press release, “and we are confident that the winner will personify what being a champion in World Series of Fighting is about.”

Though he has just one knockout to his credit, Bibulatov has excelled as a kempo karate practitioner and indicated a desire to take out Frelow in spectacular fashion.

“I feel like my biggest advantage is that I’m a more dynamic fighter,” he said. “I love knockouts, and that’s what I’m predicting. I’m predicting a knockout.”