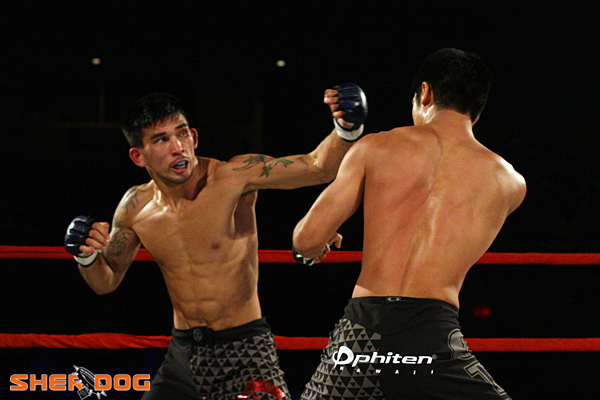 
Sometimes a loss is just what a fighter needs to make the leap to the next level in his or her career.

Bantamweight Russell Doane certainly feels that is true in his case.

After suffering a third-round submission loss to Shooto alum and unbeaten prospect Michinori Tanaka at a Pacific Xtreme Combat event in November, Doane -- who hails from Honolulu and represents 808 Top Team -- went back to the drawing board and rebounded with a first-round submission of Omar Avelar at a Destiny MMA show two months later.

“The biggest thing I took from [the loss] was to just be myself during a fight,” said Doane, who sports seven finishes among his nine professional MMA victories. “I just stood around instead of moving throughout the fight and being more explosive. I learned not to stray from what works for me. Everybody has to lose sometime. It’s better to get it out of the way.”

Ronald Jhun, a well-traveled mixed martial artist who serves as Doane’s coach, thinks there may have been a reason the young bantamweight was not himself in the Tanaka bout.

“He was really sick and never told us,” Jhun said. “I believe that played a big part in him losing that fight. Not only was he fighting [Tanaka], he was fighting being sick. I just found out that night that he has asthma. After he lost, he came in and trained hard and we were able to get him another fight to get him back on track. I think it was kind of good for him to lose, because if you’re going to lose, it’s better to do it earlier in your career where you get something from it.”

Even though he only has 10 professional MMA appearances under his belt, Doane has been training for roughly six years. Like many aspiring fighters, he came to MMA from a boxing and wrestling background.

“I boxed for years, [and] then I did wrestling in high school,” Doane said, “but I always wanted to try MMA. The first time I saw MMA was when Rumina Sato did a flying armbar on somebody and I said, ‘I want to be able to do that.’ I always was the runt of my family, so I wanted to go into MMA so I could be the tough one.”

Leaning on a background that included boxing and wrestling gave Doane an inherent advantage when he turned his attention to MMA.

File Photo
Jhun sees success ahead.
“When I first started working with him, his wrestling really was his strong point,” Jhun said. “Now he’s gotten to the point where he’s a more complete fighter. He works hard on his jiu-jitsu, strength and conditioning and other skills. Russell’s started liking his standup more, but I think his ground game is solid, too. You have to be well-rounded to be successful in this game, and Russell’s come a long way from when he was doing amateur fights to where he is now. He’s on the right path and knows what he needs to do to be successful.”

Doane points to his ability to keep the heat on his opponents as one of his main strong points.

“I think I’m pretty well-rounded,” he said. “I have a heavy right hand and a decent ground game, but I think what sets me apart is the pressure I put on people. I’m always in my opponents’ faces and by the time they get set to come after me, I’m not there anymore. I always want to get better, but if I feel like anything needs more work, it’s my ground game. I’d like to practice my jiu-jitsu every day, but my job gets in the way.”

Doane made his professional MMA debut back in March 2008 with a first-round technical knockout of World Series of Fighting standout Tyson Nam and took another fight in June 2008. He remained idle until March 2010, when he recorded a second-round submission of Timothy Meeks. He notched two more wins that year but fought just once in 2011 -- a first-round knockout of Rich de los Reyes on an X-1 World Events show -- before posting a five-round unanimous decision over Frank Baca for the King of the Cage 135-pound title in July 2012. Doane picked up his pace following the Baca victory, securing a three-round unanimous decision over Masato Sannai on a Pacific Xtreme Combat card in September before losing to Tanaka two months later. The win over Avelar was Doane’s most recent fight, and he admits he prefers to keep a more robust schedule.

“I always want to stay busy,” Doane said. “I have another fight coming up in July, but I wouldn’t mind having another one sooner. If it doesn’t happen, that’s OK. I’m just going to keep working on everything. My career is going well and I can’t complain. Part of me wants to be in the big show, but if I keep working hard, I’ll get there and it’ll be sweeter when it does happen.”

“
Part of me wants to be
in the big show, but if I
keep working hard, I’ll get
there and it’ll be sweeter
when it does happen.

Jhun, who made one appearance in the Ultimate Fighting Championship in 2004, sees Doane making a splash on the big stage sooner rather than later.

“It’s all up to him,” Jhun said. “He’s putting in the work he needs to so that he can fight on the big stages. I see him at the next level, someplace like the UFC, by the end of this year or early next year. One thing, though, is that the division is pretty stacked and the guys they’re bringing in right now are 15-0 or 20-1 and things like that. He just needs to be patient and not force things. Russell just needs a break, that’s all.”