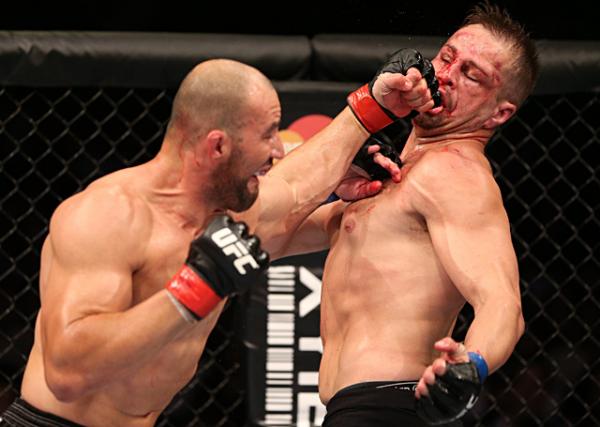 
MMA fans crave violence, whether they are hardcore, casual or just passing by, whether they love the science behind fighting, the technique displayed ore the colorful personalities that populate the sport. A part of all of us just wants to see sheer brutality. At UFC 153 “Silva vs. Bonnar” on Oct. 13 in Rio de Janeiro, Brazil, fans got what they wanted -- a beatdown of epic proportions.

Sometimes, “Beatdown of the Year” is a prize won not only by the assaulting fighter but through the heart of his or her opponent and the referee’s tolerance for brutality. Glover Teixeira will have the award for 2012 on his mantle, but referee Mario Yamasaki’s patience and opponent Fabio Maldonado’s determination truly made the tale worth telling.

Touted as one of the more intriguing figures to enter the Ultimate Fighting Championship’s Octagon in 2012, Teixeira took the scenic route to the big show. It took the Brazilian 18 professional bouts and 10 years before he cashed his first paycheck from Zuffa. That experience and mastery of his craft was on display when he made his promotional debut against Kyle Kingsbury at UFC 146 in May. Five months later, Teixeira had Maldonado in his crosshairs.

Almost instantly, Teixeira lit up Maldonado with punches that created the opportunity for a takedown. Once on the floor, Teixeira moved to mount and got comfortable. For those who consider fighting a form of art, the next few moments were like watching a painter at his easel. Teixeira looked at his canvas, laid out his tools and went to work. He started with a few punches, but once he got a feel for what he wanted to accomplish, he switched to elbows. Teixeira’s patience was something to behold. 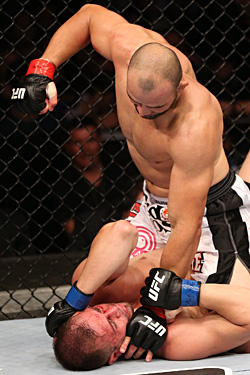 J. Hedges/Zuffa LLC/Getty Images
Maldonado was out-landed 86-6 in
the first round alone.
At the two-minute mark, UFC commentator Mike Goldberg suggested it might not last much longer. Had Yamasaki decided to call for the stoppage, no one could have faulted him, even though the battered Maldonado was still defending himself. The strikes were getting through with authority. From there, Teixeira shifted away from brute force and turned to a more humane way of dismantling his opponent: cutting off the blood supply to the brain. He settled into an arm-triangle choke, moved away from mount and deepened his hold. Goldberg and UFC analyst Joe Rogan both saw the attempted submission as an inevitable end to the match, but the fight went on.

Maldonado’s grit and will shined through, as he kept himself in the bout by returning to his feet. However, he found only further punishment there. Punches from Teixeira were abundant. Maldonado was showing the wear and tear of battle, as he backed up and ate shots, causing fans and media alike to grow more and more concerned for his well-being. It seemed as though the cage was the only thing keeping him upright.

Teixeira walked forward, stalking his prey. Out of nowhere, Maldonado delivered a left hook that briefly stunned his tormentor. It was not enough of a retort through which to author a Hail Mary comeback, but it was enough to get Maldonado through the rest of the period.

Round two started with another swift takedown. Teixeira again moved to mount and found Maldonado’s face with more elbows. The onslaught was not as devastating as the one that preceded it in the first round, but the accumulation of blows was adding up. Maldonado looked more like a zombie from “The Walking Dead” than a professional mixed martial artist. After he restarted the light heavyweights due to inactivity, Yamasaki sought the advice of the cageside physician.

Maldonado, his face bruised and bloodied, grimaced at the sight of the doctor entering the Octagon. However, after a brief examination and subsequent discussion, he was allowed to continue. Over the next 45 seconds, Teixeira landed a series of lefts and rights that forced Maldonado to retreat. He nearly fell over as he felt for the cage in an attempt to brace himself.

Once the second round concluded, Maldonado’s cornermen moved into the cage and set up a game plan for the final five minutes: “We need to keep the fight standing.” It was not meant to be. The physician entered the cage between rounds and recommended the bout be stopped. Only Maldonado seemed to object, providing one last glimpse into the unwavering heart of a warrior.

According to FightMetric figures, Teixeira out-landed Maldonado 85-10 in terms of significant strikes and 117-14 in total strikes. He was successful on all three of his takedown attempts and passed guard five times. Afterward, a picture of longtime UFC middleweight champion Anderson Silva checking Maldonado’s vitals in the hospital made the rounds on the social networks. They say pictures can say a thousand words. This one spoke only one: beatdown.