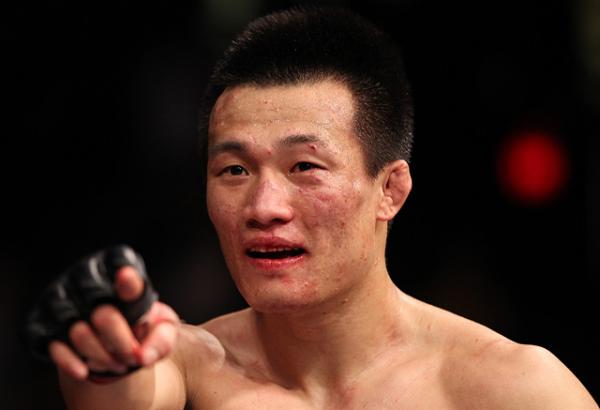 
Chan Sung Jung and Dustin Poirier made certain the good people of the Commonwealth would not soon forget them.

“The Korean Zombie” rendered Poirier unconscious with a fourth-round brabo choke in the UFC on Fuel TV 3 main event on May 15 at the Patriot Center in Fairfax, Va. Poirier, who had never before experienced defeat at 145 pounds, blacked out 67 seconds into round four, bringing a dramatic close to a remarkable encounter between two blue-chip featherweights in what emerged as Sherdog.com’s “Fight of the Year” for 2012.

What follows is a blow-by-blow, real-time account of the unforgettable battle that unfolded between Jung and Poirier:

Round One: Poirier scores first with a left hook and then goes inside with leg kicks, one of which Jung catches and uses to push “The Diamond” to the ground. Poirier gets up and works a single-leg on the fence as Jung lands a couple elbows, watching the monitor to figure out the best route of attack. Punches to the body from Poirier are answered by a knee up the middle from “The Korean Zombie.” Jung gets a body lock and trips the Louisianan to the ground, landing in side control. Poirier uses his feet to push off the cage and establish full guard, but Jung stays heavy on top and lands hard elbows with both arms. Poirier is cut along the hairline on the left side of his head from the elbow strikes. Jung lands more elbows, postures up and takes some pushing upkicks to the face. Poirier sweeps into top position, while Jung uses the butterfly guard to push off and sit up against the fence. Poirier is not doing much offensively, as he just holds Jung against the fence while the Korean waits for an opportunity to post and stand. Poirier lands an elbow as they stand and break apart, and Jung comes back with a combination. Poirier shoots in the waning seconds of the first round and Jung sprawls all over it. 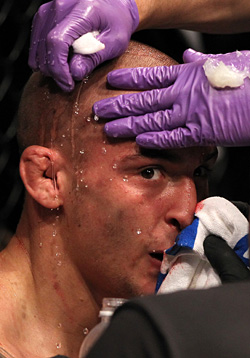 J. Hedges/Zuffa LLC/Getty Images
Poirier more than did his part in the FOTY.
Round Two: Jung catches a kick and socks Poirier with a hard straight right that drops the American to the ground. “The Korean Zombie” pounces and works some solid ground-and-pound before settling into Poirier’s closed guard. Poirier tries to control the wrists and slow the action, then pushes off the fence with his feet, maybe looking to swings his hips for an armbar. Jung sits up and blasts Poirier with a hard left hand, then stands and dodges upkicks. Jung lets his man back to his feet, and they trade straight punches. Poirier lands a right hook that makes Jung whiff on a spinning back fist. Jung lands a wild flying knee and then mugs Poirier against the fence with punches. Poirier shoots a double-leg, but Jung thwarts it and uses the botched takedown to roll straight into full mount. Poirier clasps his hands around Jung, trying to close the gap while the Korean drops shots from the top. Jung peels off and extends an armbar on Poirier’s left arm, but the Louisianan defends well. Jung switches to a triangle and elbows the trapped Poirier in the face. Poirier gets low and slips loose, winding up on top in his opponent’s open guard with 40 seconds left. Poirier lands a right hand and Jung throws up his legs for another triangle. He locks it on, but time runs out and Poirier gets up shaking his head.

Round Three: The punches are coming a little slower from both featherweights now after 10 fast-paced minutes. Poirier is sticking his jab while Jung, with his hands held low, is missing with wilder punches. A straight left from Poirier turns around Jung’s head, but just when it looks like Poirier is taking the driver’s seat, Jung hits a big takedown. He stays on top in side control for about 10 seconds -- long enough for to inflict some damage on the ground. Poirier lands a right hand, but Jung replies with a hard knee to the gut before backing off to reset. Poirier comes forward swinging and Jung dodges him with his hands at his waist. “The Korean Zombie” charges forward with punches and a knee, backing Poirier into the fence. Poirier’s straight punches are getting the better in the late going, but Jung is not out of it as he finishes the third frame with a combo against the fence. Poirier sticks out his tongue at the close of the round.

Round Four: Poirier jacks Jung’s jaw with a one-two, but the Korean comes right back with a stinging right uppercut-left hook combo. Poirier wobbles backward into the fence and Jung charges with a flying knee. Poirier shoots a single-leg, but Jung is prepared. “The Korean Zombie” sprawls and uses the opportunity to lace his right arm around Poirier’s throat. Jung rolls him over and cinches up the brabo choke, and Poirier goes unconscious. Referee Dan Miragliotta steps in to wave it off at the 1:07 mark.

“I didn’t feel so much that I was getting tired,” Jung said. “At some point in the second or third [round], I kind of hurt my knee. I had to back off my pace a little bit, but that is something I chose to do. I thought that we were very similar. He’s a tough fighter. I knew that coming in. I want to show I was tougher, and I think I was able to do that in the fight. He had me in trouble at the beginning of the third round. The thought of giving up was in my head, but I just kept going, and I came out with the win.

“The [brabo] choke is something I use a lot in practice. The things I prepared before this fight were the uppercut, the spinning back fist and the flying knee,” he added. “I think it was the beginning of the third round when I looked into Dustin’s eyes. I thought, ‘I can do this.’ I honestly didn’t know that the [brabo] choke would work, but it did.”

Having finished all three of his opponents -- Poirier, Mark Hominick and Leonard Garcia -- since joining the Ultimate Fighting Championship as part of the World Extreme Cagefighting merger, Jung zeroed in on the man who has ruled the 145-pound division for more than two years.

“I want [UFC featherweight champion] Jose Aldo,” he said. “I think I definitely made a point about going into a title fight here. If the fight had gone to a decision, I don’t think it would have made the [same] statement. Previously, I thought I got lucky in a lot of my fights, but I was able to really showcase my abilities and prove what I could do out there.”

When asked whether or not the submission win over the man they call “The Diamond” represented the most significant victory in Korean mixed martial arts history, Jung, who has not fought since, spoke only for himself.

“For me, it was [the best moment of my career],” he said, “but I’m waiting for the day I can become champion.”