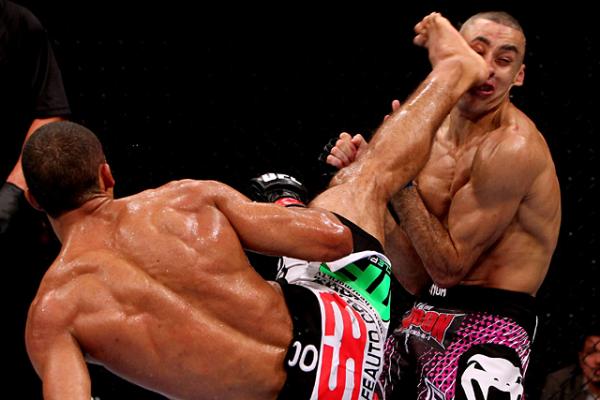 Edson Barboza scored a knockout for the ages at UFC 142 in Brazil. | Josh Hedges/Zuffa LLC/Getty Images


Though fans of mixed martial arts have borne witness to dozens of impressive knockouts over the years, recent times seem to have produced an especially bountiful harvest of violence.

In 2011, we were treated to Lyoto Machida’s award-winning, tooth-loosening, retirement-prompting crane kick knockout of Randy Couture and saw the words “tornado kick” suddenly thrust into our collective vocabulary thanks to Russian talent Adam Khaliev. Anderson Silva sneakily sunk Vitor Belfort with that now-infamous Steven Seagal-adapted mae geri, and Nick Denis put a choke slam on Nick Mamalis that would make even The Undertaker crack a sinister smile.

Not to be outdone, 2012 also put forth a formidable list of unconsciousness-inducing finishes. Who could forget Chris Weidman’s gorgeously placed elbow against Mark Munoz or Cung Le’s dramatic upset of Rich Franklin? Siyar Bahadurzada’s one-punch-one-kill stoppage of Paulo Thiago was also permanently seared into the collective MMA consciousness, as was Nate Marquardt’s vicious flurry of violence that sealed Tyron Woodley’s fate in their duel for the Strikeforce welterweight belt.

Though all of those performances should rightfully be regarded as extraordinary, Sherdog.com has selected Edson Barboza’s spinning wheel kick knockout of Terry Etim as its “Knockout of the Year” for 2012. Indeed, this was a strike worthy of unparalleled praise and admiration -- one kick to rule them all.

Barboza’s stage was provided by UFC 142. Though the Jan. 14 show served as the organization’s first event of 2012, it ended up becoming one of the UFC’s best efforts of the entire year. Emanating from the HSBC Arena in Rio de Janeiro, UFC 142 offered up a number of exciting moments for the partisan Brazilian crowd, including featherweight champion Jose Aldo’s sudden knockout of Chad Mendes and Vitor Belfort’s rear-naked choke submission of Anthony Johnson.

Despite the stiff competition, no performance shone more brightly than Barboza’s. Though the Brazilian was estimated as a three-to-one favorite, few could have anticipated the memorable way in which he would take care of his business. Then a perfect 9-0, Barboza entered the cage on the strength of hard-fought victories over Anthony Njokuani and Ross Pearson the year prior, as well as a drubbing of Mike Lullo to close out 2010.

Etim, meanwhile, had returned to the Octagon the previous November after spending 19 months on the shelf due to a lingering rib injury. The nine-time Ultimate Fighting Championship veteran did not disappoint in his homecoming at the LG Arena in Birmingham, England, finishing Edward Faaloloto in just 17 seconds to open the UFC 138 main card. File Photo
Etim was victimized in round three.
Considering the sharpness of his promotional return, Etim was considered by many to be an excellent test for the budding Barboza. As such, the Brit appeared anything but gunshy in the early going, stepping into punching range and throwing several feints, soon after charging forward in search of a takedown. Barboza shucked off the effort, securing an underhook and sprawling on the Brit, shoving him away in order the gauge distance in the center of the cage. Undeterred by the failed attempt, Etim began to attack with leg kicks and jabs. Forcing Barboza back on his heels, Etim again drove for a double-leg. Though he would score the takedown on his second try, he was immediately reversed by Barboza, who used a butterfly hook to sweep the Brit and regain his vertical base.

“I knew he’d try to take me down,” Barboza would later tell UFC.com in Portuguese. “I stuffed his takedowns, and I knew at some point in the fight I was going to hurt him.”

Though Etim had previously checked the Brazilian’s low kick attempts, Barboza this time used a sweet feint to set up the technique. Floating to his left while avoiding Etim’s jab, Barboza once again used his right shin to batter Etim’s lead leg. Unfazed by the low kicks, Etim continued to move forward, launching jabs and left hooks in retaliation. Barboza then nearly ended the contest with a lead-leg high kick, but the Brit blocked the attack and soon after put his head down for another futile try at a takedown.

Light on the balls of his feet, Barboza parried several crisp straights from his foe, apparently unconcerned with their intended effect. More leg kicks would follow from Etim to end the round, but, as was generally the case that night, Barboza’s retaliatory blows landed with more force. Barboza punctuated the frame with a foreboding spinning back kick, driving his heel into Etim’s belly and forcing the Brit several feet backward as the horn sounded.

Between rounds, Etim’s corner urged him to defend the leg kicks that would eventually slow his typically nimble footwork, advising the lanky Englishman to look for opportunities to counter when Barboza loaded up for big shots. In theory, this guidance seemed sound. Unfortunately for Etim, practicing the contents of that sermon would prove to be significantly more difficult.

Barboza picked up his pace to start round two, burying his shin into Etim’s quadriceps thrice with noticeable effect. As Etim’s lead leg began to stiffen, the Brazilian calmly backpedaled and stuffed another takedown attempt, delivering a knee to Etim’s guts. Though he gamely fired back and circled right in order to avoid Barboza’s power, Etim’s efforts did little to slow his opponent’s punishing output until the Brit finally scored his second takedown of the fight. Just as it had in the first round, however, Etim’s window of opportunity closed almost instantaneously, as Barboza used his butterfly guard to toss Etim off base and return to his feet. As the round waned, a packed HSBC Arena began chanting Barboza’s name shortly after the Brazilian delivered a cringe-worthy left hook to Etim’s liver.

Despite the damage already done to his leg, Etim continued to move forward in the fateful third round, his attacks now significantly slower and easily stifled by Barboza. Then, in one beautiful moment, it happened. Barboza connected with yet another low kick and returned his right leg to its previous place, apparently content to hit the reset button and retreat from any retaliation. Instead, what followed was a strike about as fine as any man has ever thrown.

In a single motion, Barboza lifted his right knee high into the air, pivoting his torso on his left foot while whipping his head around his shoulders to lock his eyes on his target. As Etim tucked his elbows in tight to protect his ribs from what initially must have looked like another spinning back kick, Barboza’s right leg gradually unfurled from his ominous spiral, reaching full extension just before the sole of his foot met with Etim’s right orbital bone.

As color commentator Joe Rogan would point out, Barboza had previously landed the technique against Njokuani but had only grazed “The Assassin” with his toes. With Etim, Barboza connected with every last bit of force coiled in his body, instantaneously short-circuiting Etim’s nervous system and causing him to fall like a felled fir to the canvas, his head and spine bouncing off the floor upon impact.

Referee Dan Miragliotta mercifully and appropriately rushed to Etim’s rescue, and Barboza casually executed an about-face reminiscent of Indiana Jones’ turn after wasting the sword-wielding bad guy in “Raiders of the Lost Ark.” Fight fans could not have asked for a more picture-perfect conclusion to the contest, and Barboza was awarded both “Knockout of the Night” and “Fight of the Night” honors for his efforts.

“I thank God for having given me the wisdom and knowledge to throw the right shot in the right moment,” Barboza told Sherdog.com. “I’m very happy with all the recognition I got after this win, but now it’s time to change the page and go forward.”

While cageside officials tended to his fallen foe, Barboza dropped to his knees, shaking his head as he pointed to himself before raising his index finger toward the sky, seemingly suggesting that he was but the mortal mechanism through which the heaven-sent finish was delivered to mankind.

Although such a point would be hard to argue against given the evidence at hand, Barboza’s divine knockout of Etim would not prove to be an omen of things to come, as he was blitzed by heavy underdog Jamie Varner in his next fight at UFC 146.

Still, regardless of what Barboza may or may not do with what seems to be a promising future in the fight game, the lightweight’s sublime wheel kick stoppage of Etim will forever be known as Sherdog’s “Knockout of the Year” for 2012.