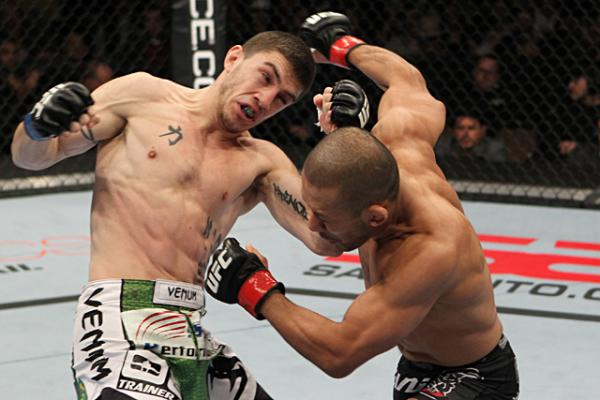 
When the Ultimate Fighting Championship booked Ivan Menjivar and John Albert for a UFC on Fuel TV 1 battle on Feb. 15 at the Omaha Civic Auditorium in Omaha, Neb., few took notice. Shame on all of us. In less than four minutes, the two high-octane bantamweights authored something utterly magical: Sherdog.com’s “Round of the Year” for 2012.

The give and take was fast, furious and relentless.

Menjivar came out swinging with overhand rights, only to retreat when Albert returned fire with a series of hooks; the Dennis Hallman protégé then stepped in and drove his knee into Menjivar’s midsection. After a brief tie-up, “The Pride of El Savador” transitioned from a spinning back fist to a trip takedown. Albert turned to a triangle choke and caught an omoplata, but Menjivar stacked him and unleashed half a dozen hammerfists. This was mixed martial arts at its best.

Albert was not dissuaded. He threw up another triangle choke and settled for an armbar, only to see the Tristar Gym export extract himself from danger yet again. A leg lock battle ensued, with Menjivar clinging to a standing ankle lock and Albert searching for a heel hook. During a subsequent scramble, the Montreal-based bantamweight punished a turtling Albert with a brutish soccer kick to the body. Albert stood soon after and dazed his adversary with a head kick before swarming in a clear attempt to become the first man to finish Menjivar in nearly a decade.

“I was in a bad position,” Menjivar admitted. “I wasn’t so much hurt as I was taking my time to feel the moment. It was dangerous at the same time, because I feel like the referee was ready to stop the fight.”

Discretion stayed referee Jim Axtell’s hand, as he allowed the fight to progress. It was a wonderful decision on his part. Albert threw the kitchen sink at his 29-year-old counterpart, vicious punches and knees spearheading his onslaught. Menjiver -- who had not been stopped via strikes since his ill-fated encounter with a young Georges St. Pierre in January 2002 -- weathered the attack, wound up in top position and let fly with some ground-and-pound of his own. Albert surrendered his back.

File Photo
Albert has now lost three straight.
“I think [when I was on] the back, [the] first [thing I wanted to do] was control position and punch him,” Menjivar said. “Then I realized his chin was up, his neck was up, so go for the choke.”

The seasoned and opportunistic Menjivar cinched a deep rear-naked choke, leaving “The Ultimate Fighter” Season 14 alum no choice but to concede defeat. The tapout came 3:45 into round one.

“In my head, I was thinking about [Kazushi] Sakuraba the whole fight. I was thinking, ‘What he would do in this moment?” Menjivar said. “I know experience is important, but it’s a fight. He’s strong, and he’s in the UFC. He’s at that level, and he’s dangerous. I have experience, but the new guys -- the next generation -- are really good. I do work hard because they’re good.”

In just his ninth professional outing, Albert had brought one of the sport’s pioneers to the brink of defeat. Valuable lessons were absorbed in the process, painful though it might have been.

“I learned I can compete with the best in the world,” Albert said. “I learned I still have a lot to improve on as a mixed martial artist, but I always feel like I have so much to improve on.

“No one is perfect,” he added. “No one is unbeatable. I strive to just always improve. If I wasn’t always able to better myself, I think the sport could get boring for me.”

Albert, who pocketed a $65,000 “Fight of the Night” bonus in bowing to Jorgensen, will enter his next appearance saddled by three consecutive defeats. The 26-year-old Reno, Nev., native takes adversity in stride.

“I fight because I love everything about the sport,” he said. “My goal is to just do my best and give it my all. If I lose and the UFC cuts me, that’s just fate. As long as I gave it my all, I’m happy.

“Life isn’t about winning; it’s about doing your best,” Albert added. “I gave my best against Menjivar, and I guess the right people were impressed.”