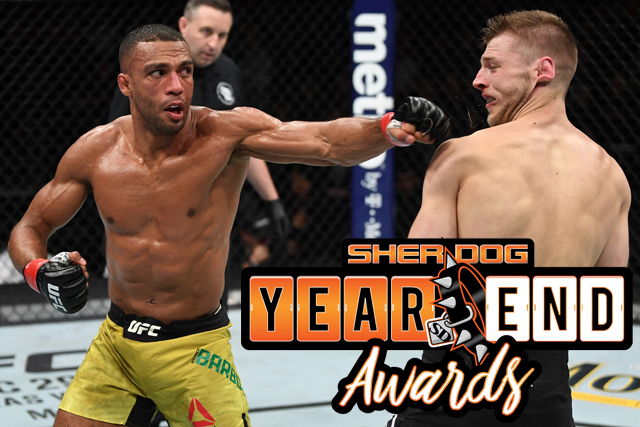 The technical brilliance was matched only by the sheer brutality. When Edson Barboza toed the line against Dan Hooker in the UFC on Fox 31 co-main event on Dec. 15 in Milwaukee, most observers anticipated a competitive battle between an Ultimate Fighting Championship mainstay and a divisional upstart on the rise. Instead, they were treated to Sherdog.com’s 2018 “Beatdown of the Year.”

Barboza put away the City Kickboxing standout with a left hook to the body 2:19 into the third round before 9,010 fans at the Fiserv Forum. He was in prime form. The 32-year-old Brazilian wrecked the inside of Hooker’s lead leg with battering-ram kicks before targeting the head and body with his fists and shins. Barboza was sadistic in his approach -- “The Hangman” at some point must have felt like a formaldehyde-infused frog in a 10th-grade biology class, a pimply faced teenager, scalpel in hand, hovering overhead -- and answered his counterpart with increasing violence at every turn. He doubled over Hooker with multiple spinning back kicks below the navel in the third round, reset and then sealed the Kiwi’s fate with a wicked left hook to the liver.

“Dan is a really tough guy,” Barboza said. “He is Top 15 in the world for a reason. He’s young and has a great future. I landed good, clean shots, but I fight the best guys in the world, so I just had to keep going.”

While it lasted a little more than 12 total minutes, it seemed like an eternity. In the immediate aftermath, UFC President Dana White followed Hooker backstage to check on the well-being of the New Zealand native. White believes it should have been waved off sooner but admitted Hooker’s pride was wounded as much as his body.

“I was worried,” White told Fox Sports 1. “There’s a lot of tough guys and girls in this sport. He gets to the back, refuses crutches, refuses help to walk, gets into the area where the physicians look at him and was just so upset with himself. He’s got nothing to be ashamed about. He showed ton of toughness tonight, a ton of heart. The fight actually should have been stopped earlier than it was.”

Most who witnessed it agree with White’s assessment. According to final FightMetric data, Barboza outperformed his counterpart 126-81 in the significant strikes landed department. However, he did the majority of his damage below the head, especially with kicks. Barboza connected with 36 of his 43 attempted strikes to the body and 19 of his 23 strikes to the legs. The second and third rounds were particularly difficult to stomach. This was a blow-by-blow account, as provided by Sherdog.com:

Barboza goes right back to the low kicks to begin the round, and Hooker is starting to stumble. Hooker has switched stances, but he’s moving forward. Barboza lands some knees in the clinch. Hooker is pressuring Barboza, throwing straight punches in the pocket. Barboza lands a knee down the middle, then an elbow moments later. Barboza catches Hooker off-balance with a punch, but he ends up with his opponent on top of him. Hooker is in half guard, throwing short punches to the ribs. Barboza uses his legs to create space and get up. The Brazilian rips the body with his punches, then lands a switch kick to the body. Hooker is eating serious punishment and still walking forward. Barboza is unloading with hooks and body shots. Hooker ties up with Barboza, only to be shoved to the floor. Barboza sticks several hard jabs, then an uppercut-hook combo. Barboza rocks the body with a kick, then more hooks to the ribcage. A right hand behind the ear makes Hooker stumble, but he recovers and keeps walking forward. Hooker absorbed a tremendous amount of punishment in that frame. 10-8 Barboza.

Barboza goes right back to work, jabbing and attacking Hooker’s leg with low kicks. Hooker continues to walk forward, and he’s met with a left hook to the body. Hooker shoots for a takedown and presses the Brazilian into the fence. Barboza is able to separate, and he hurts Hooker with a spinning back kick to the liver. Hooker is standing still as Barboza tees off with kicks against the fence. Somehow Hooker doesn’t go down, and Barboza fires off another spinning back kick to the body. Barboza rocks Hooker with more punches, then drills him with a series of knees from the clinch. It’s unbelievable that Hooker is still standing at this point, and he’s absorbing enough punishment that a stoppage could be justified at any moment. Finally, a left uppercut to the midsection sends Hooker to the canvas, doubled over in pain. Mercifully, this one is over.

Barboza has made himself synonymous with violence in the cage, a maestro of the macabre. In January 2012, he authored one of the greatest knockouts of all-time when he cut down Terry Etim with a spinning wheel kick at UFC 142. Jaws hit the floor across the globe as an unconscious Etim bounced off the canvas. Barboza built upon his highlight reel in 2017, when he wiped out Beneil Dariush with a perfectly timed knee strike at UFC Fight Night 106, the concussive impact of the blow followed by an audible gasp from the crowd in Fortaleza, Brazil. However, his work against Hooker was something different and added a new layer to the fear associated with facing him inside the Octagon. Perhaps most importantly, the sustained beating put an end to the first two-fight losing streak of Barboza’s career and reminded the world of his torturous capabilities.

“I’m very happy,” Barboza said. “I worked so hard for this fight. A lot of things happened in my life the last couple months, and I kept doing the right thing for my life. I’m very happy.”