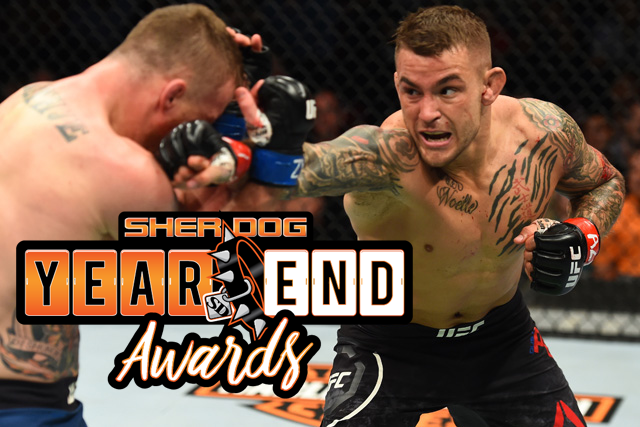 What did we do to deserve Justin Gaethje? The Arizona native is the gift that just keeps giving. And just like in 2017, Gaethje was generous with his time, efforts and brain cells in service of our entertainment. For the second year in a row, he pulls double duty earning the round of the year within the fight of the year.

This time, the second half to the wonderful combination of tenacity and violent intensity was surging lightweight contender Dustin Poirier. Poirier is no stranger to the type of fire fight that gets those year-end nominations. Keep in mind, he joined the Korean Zombie in crafting the best fight of 2012 and an argument can be made for both of his meetings with Eddie Alvarez getting honors for 2017 and 2018 respectively.

So when you combine dangerous and combustible elements in the unstable environment of the Octagon, expect one entertaining explosion. Poirier and Gaethje did their best imitations of gasoline and hand grenades en route to the best bout of 2018.

When the top-10 lightweights met in the main event at UFC on Fox 29, there was a lot at stake. The Diamond was enjoying a three-fight unbeaten streak, which included two fight of the night bonuses against Jim Miller and former champ Anthony Pettis, along with the aforementioned first Alvarez outing. Gaethje was also basking in the glow of dual fight of the night honors. However, he was on the losing end of his meeting with Alvarez and needed to get back in the win column.

Just a week earlier, the division officially moved on from the defenseless reign of Conor McGregor, when Khabib Nurmagomedov earned the undisputed belt at UFC 223. With a new king at the mountaintop, former interim champion Tony Ferguson injured and McGregor embroiled in legal trouble for the infamous bus attack in Brooklyn, getting a win on a big stage was vital to standout in a crowded weight class.

Upon the opening bell, it was very clear what we were in for. Gaethje largely wanted to stick to the same game plan that made him a dominant champion in World Series of Fighting: Stay in pocket with heavy punches with a healthy amount of leg kicks to mix up the offense. While strategically not the soundest decision, it was rather unsurprising that Poirier was more than happy to oblige.

The first frame saw the unrelenting pressure of Gaethje and the well-timed leg kicks making their presence known. Poirier was clearly hurt by early and seemed overwhelmed by the pace. When he looked at the clock 2:00 into the round, it appeared that “The Diamond” was in for a long night.

But, Poirier was far from out of his element. He was able to consistently land punches in tight space and capitalized on several opportunities to hit the body. In addition, he opened a cut over Gaethje’s eye and won the round on all three judges scorecards.

As Gaethje took the stool after the stanza, he and his corner made their intentions very clear. Longtime trainer Trevor Whitman seemed puzzled when his pupil asked who won the round. According to Whitman, it didn’t matter. Banking rounds was not the goal. Reassured, “The Highlight” verbalized the objective. “I’m going to break this motherfu**er, you can bet that,” were his last words before getting from the stool to answer the bell.

The fast pace continued into the second period. The boxing exchanges kept up with Poirer getting the better of most of them. The leg kicks were amazingly on point as Poirer’s southpaw power punches were met with inside leg kicks. An eye poke from Gaethje briefly halted the action. The break seemed to renew the fighting spirits of both men as they continued at a blinding pace.

The damage from the leg attacks led to Poirier switching stances and varying up the hand combinations. Despite the blows he was absorbing, Gaethje steadily continued moving forward and staying in his opponents face. A failed takedown attempt from Poirier led to him being pushed against the fence eating elbows and uppercuts from the clinch. Gaethje threw a head kick off of the break and measured a well-executed cartwheel kick to close the frame.

As bags of ice met Poirer’s leg on the stool in the corner, it was clear that the high pace and power striking of Gaethje was having an impact. With a new cut open and swelling around the eye, Poirer’s 10-9 on two of the judges’ scorecards came at a very heavy price, especially considering the momentum shifting to Gaethje as period came to a close. Mike Thomas Brown insisted that The Diamond stay the course with a game plan and not be sucked into the type of brawl that Gaethje brings out of everyone that faces him. Movement was the key as Brown wanted to “play matador, make him miss.”

Leg kicks and pressure were once again on the menu as the University of North Colorado All-American wrestler remained steadfast on what was working for him. Poirer’s leg lead lifted high off the floor with every clubbing by Gaethje’s shin. A short counter right hand hurt the Louisiana native and sent him stepping back toward the fence. Gaethje took advantage and landed clinch strikes attacking the head, legs and body before Poirier could find his way out of danger.

Poirier succeeded on the first takedown of the bout. That success was short lived as Gaethje was back on his feet within a few seconds. Their exchanges then continued right where they left off. Just as fatigue looked like it was setting in, Poirier suffered another eye poke. Herb Dean took a crucial point away from Gaethje in a razor-thin fight. The doctor examined Poirier to the chorus of boos from every angle inside Gila River Arena in Glendale, Arizona. When the cage-side physician gave the OK, the men resumed the remaining few seconds on the clock with Poirier returning an eye poke favor at the bell.

The men gave exchanged choice words related to the repeated fouls before going back to their respective corners. While the crew at American Top Team were reapplying cold therapy to the heavily damaged leg of Poirier, Whitman was telling Gaethje to “stay on the legs.”

As was the case in the previous rounds, Gaethje did exactly that. He continued his forward movement and inside leg kicks. This time however, Poirier landed a perfectly-timed counter left hand in response. Gaethje stumbled back and was clearly hurt by the strike. Poirier remained calm and measured as he maintained the perfect distance to pick his shots.

Repeated hooks continued landing as Gaethje still couldn’t regain his footing. Upon falling back against the fence and sinking to the floor, Dean was forced to step in call the TKO.

Looking back on this contest, it will undoubtedly go down as one of the premier action fights in recent years. The unfortunate part is that the luster, in context of the divisional hierarchy, was lost in the months to come. While a thrilling performance that resulted in such a great finishing sequence against a top contender would have earned a title shot in other eras, the looming presence of McGregor haunted the aftermath of this fight.

The bus attack became a brief and insignificant hiccup to the Irishman on the legal front. It also served as the focal point of promotional materials heading into his return against Nurmagomedov. It also set the backdrop for the biggest selling pay-per-view event in the history of mixed martial arts at UFC 229.

Unable to secure the rubber match with McGregor, Nate Diaz opted to make his return opposite of Poirier at UFC 230. After a puzzling shuffle of main events and a failed attempt at fighting for inaugural 165-pound title, Poirier suffered a late injury and Diaz decided to remain inactive with no return date set.

The post-fight brawl of 229 and Diaz’s absence have left Poirier as the odd man out in the cluttered lightweight title picture. With recent declarations from Nurmagomedov’s camp that Ferguson is not next in line for the belt, it opens up the possibility that Poirier and Ferguson could meet in the near future even if it isn’t for a well-deserved chance to capture undisputed gold for either man.

Gaethje was able to snap his two-fight losing streak by knocking out James Vick at UFC Fight Night 135 roughly four months later. The win kept him within sniffing distance of the belt, but the loss has clearly set the pecking order.

The ever-confusing title picture at 155 may have hurt the long term relevance of this fight, but it certainly did not damage the entertainment value. Without this bout, Poirier and Gaethje already will go down as two of the more fan-friendly action fighters in the modern MMA landscape. Together, they were able to boost each other’s brands and keep us happy in the process. Thank you.