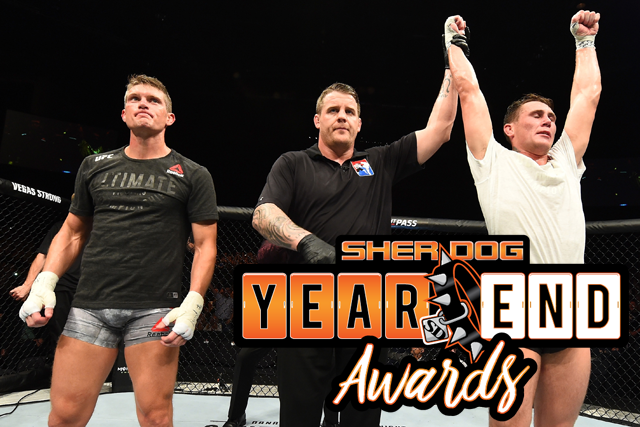 The “Robbery of the Year” award is always controversial. After every single event on the crowded mixed martial arts calendar, there is at least one scorecard that leaves the educated onlooker puzzled and wondering what fight the judges were watching. What makes 2018 so tricky is that most of the time the right guy won. For example, Dave Hagen’s scorecard for Walt Harris-Andrei Arlovski at UFC 232 deserves a stern side eye. It is simply impossible to justify a 30-27 score in favor of Arlovski. Harris was the clear winner of at least two of the three rounds, yet Hagen saw all three of them for Arlovski. Fortunately, his lone dissention was not enough to keep Harris from earning a win against the former heavyweight champion.

That was precisely the problem with determining what was the most unacceptable performance from all three cageside officials: Typically, just one went rogue and botched his assignment. In response, Sherdog.com’s 2018 “Robbery of the Year” is more of an indictment on the judging process itself. See Darren Till and his unanimous decision win over Stephen Thompson on May 27.

The stakes of the main event at UFC Fight Night 130 do not get much bigger outside of an actual championship fight. Till was several months removed from a sub-five-minute knockout of fan favorite Donald Cerrone and wanted to resume his surge for title contention. That victory gave him the attention and full backing of the promotion, as he was fighting Thompson in his hometown of Liverpool, England. If he could defeat a proven veteran who had come so close to winning the belt, as Thompson did against Tyron Woodley, it would be hard to deny his viability as a legitimate threat to Woodley’s reign as welterweight champion. Thompson had a plenty on the line, as well. After fighting to a draw in a challenge against Woodley and then dropping a decision in the rematch, “Wonderboy” was desperate to get back on track. A win over Jorge Masvidal at UFC 217 helped tremendously, but a main event win over the hometown hero and young upstart contender would force his name to stay relevant in any discussion about rankings.

To make matters even more dramatic, Till for the second time in his Ultimate Fighting Championship career failed to make the welterweight limit. Officially weighing in at 174.5 pounds, the questions related to Till’s size for the division and cardio demands for the five-round fight were magnified. When the bell sounded to begin the contest, it was quickly apparent that the aggressive Till who barreled through Cerrone was nowhere to be found. Both men took a cautious approach. Thompson was mindful of his distancing, as he used his lauded karate background to retreat with the occasional blitz of offense. He also sprinkled in a decent portion of side kicks to the body and head kicks that largely missed their mark.

Till was careful to not charge in with reckless abandon but still intended to move forward. With the exception of “Wonderboy” being dropped in the final round, there was little in the way of significant offense from Till. Most of the blows he landed were not flush shots, as Thompson managed to roll with the punches and rarely took the full brunt of the impacts. Most of Till’s success came from the low kicks, which reportedly tore the LCL in Thompson’s knee.

When the full 25 minutes played out, it appeared that “Wonderboy” had proven himself the superior fighter. He landed more cleanly and set up nice counterpunches. What seemed to work against Thompson was his movement. The same movement that was an asset in mostly avoiding the Englishman’s power punches became a liability when the scores were added up. The vague concept of Octagon control once again had reared its ugly head.

What is more valuable? Is a strategic retreat a more effective usage of the space than constantly moving forward? Who is really in control in that scenario? Moving backwards is not necessarily relenting to the pressure. If the fighter moving backwards manages to land counter shots and lure his or her opponent around the floor without being consistently cornered, cut off and trapped, the argument can be made that a withdrawal shows a great deal of control.

Looking back at another bout with a decision mired in controversy, Deontay Wilder-Tyson Fury had a similar dynamic. Wilder came forward while Fury played the matador. However, there is a clear difference in the tactics employed by Fury and those utilized by Thompson. Fury moved around the ring and did not seem to offer much in return through large stretches of the contest. While he proved to be the better boxer, he did not throw enough punches to offset Wilder’s aggression. On the other hand, Thompson managed to move and give enough back to make Till alter his approach. Much like Carlos Condit did to Nick Diaz in a faster paced version of this fight, the man moving back seemed to have more science to his approach.

Something else that makes this stand out among the other candidates for “Robbery of the Year” is the hometown factor. Home cooking is one of the age-old recipes in fight sports. Winning a decision in hostile territory is always a tough hill to climb, and a raucous crowd in Echo Arena did “Wonderboy” no favors. Beyond the psychological aspects of fighting in an opponent's backyard, the noise plays a significant factor in who gets a 10 and who gets a nine after each round. Whenever Till came close to landing on Thompson, the crowd would erupt with cheers. In a fight with little action and more subtle dynamics involved, it is easy for a judge to be affected by the energy of the crowd. A punch that barely landed and had no real impact is accompanied by shouts of support, which makes it seem like a much more damaging sequence than it was in reality. The forward movement that resulted in nothing particularly effective was accompanied by the feverish screams of a drunken crowd, so something must have landed.

Till-Thompson occupies a unique space in that its problems had as much to do with the way fights are judged as they did with the individuals tallying the numbers cageside. While the decision read in the rematch between Robert Whittaker and Yoel Romero at UFC 225 was something with which most did not agree, it did not provide anything beyond a difference of opinion on a few key moments in a nonstop back-and-forth affair. Till-Thompson was not the same. It was slower, more methodical and offered up less to misconstrue. However, the judges and the way they interpreted their assignments were still wrong.
SHARE ON FACEBOOK SHARE ON TWITTER
Related Articles
Latest News
+ VIEW MORE