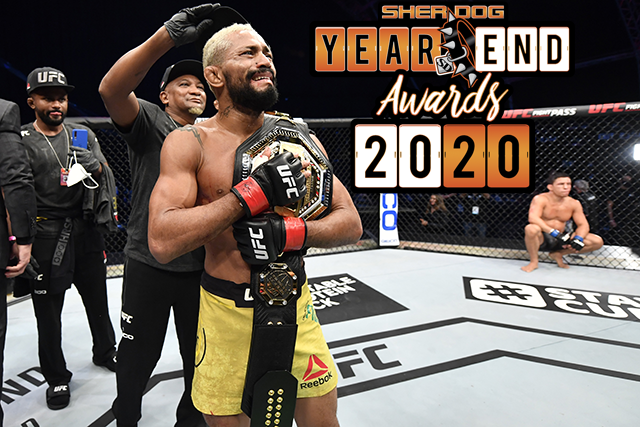 How did Deiveson Figueiredo elevate himself alongside the world’s best mixed martial artists? There has never been nor will there ever be one route to such a lofty destination. Figueiredo’s path to the pinnacle of mixed martial arts, which in 2020 netted the 33-year-old Brazilian’s first Sherdog.com “Fighter of the Year” honors, started simply enough with an auspicious introduction to combat sports.

Everything Figueiredo has learned since his father and grandfather imprinted their fistic knowledge onto him when he was just a kid living on a farm, all the information he picked up along the way from people like Iuri Alcantara and Wallid Ismail, every bit of it came to pass during a year that was unlike any other. The powerful 125-pounder went unbeaten in four fights, finishing Joseph Benavidez twice and then Alex Perez before retaining the Ultimate Fighting Championship flyweight belt following a draw with Mexican Brandon Moreno in one of the most memorable title bouts of the year.

This final fight of 2020 has not yet slipped Figueiredo’s mind. Speaking with Sherdog.com on the day after Christmas, Figueiredo said his right eye is bruised and his vision remains blurry—an effect of Moreno’s jab during a bout the champion took on a UFC-record 21-day turnaround following his first defense of the belt in November—yet he expects to return to action by the spring. Leaving the cage with the belt wrapped around his waist took no small effort after a difficult weight cut and an illness put the Brazilian in the hospital twice leading up to the bout. Despite this, Figueiredo’s closing performance in 2020 required a strong statement about his fortitude and sustainability as champion.

While Figueiredo’s last effort required a mind-over-matter performance, the heavy-fisted fighter mostly stood out for bringing fire to a division maligned as inconsequential despite featuring the likes of Demetrious Johnson and Henry Cejudo. Flyweights in 2021 have their work cut out for them trying to knock Figueiredo from his throne, and he sounds intent on keeping it that way. Following his tremendous 12-month stretch, let no one doubt the sincerity of a man who calls himself the “God of War.”

Josh Gross: How was your Christmas as you recovered from the fight?
Figueiredo: I had a great time with my family. It was lovely. I’m really enjoying that moment. but I started to think about taking Moreno’s head off even though it was Christmas time.

Gross: Why can’t you let go of the fight? Why does it matter so much that you think of it right now during Christmas time?
Figueiredo: This guy is talking a lot of bulls--- about myself. I don’t like anyone who talks trash about me. First time Benavidez talked bad stuff about me I promised that I would kill him, and that’s what I did. Against Brandon, it won’t be any different. He is saying a lot of bulls--- about me. This guy will be knocked out, and if the referee does not throw his body between us to save him, I’ll break my hand on his head. Be sure, I’m really angry with him.

Gross: Moreno said he showed you were normal, a regular human being and that your power wasn’t incredible. He took your best shot. What do you say to that? He’s obviously upset with you, but does he have any merit to what he says? You hit Moreno with good shots, and he was standing at the end.
Figueiredo: Moreno can be sure about one thing. He fought this first time when I was sick. He can be sure that the next one I will transform into Super Saiyan, and I will take his head off.

Gross: You said your right eye was affected by his jabs. How do you deal with his jab? Moreno has said his left hand is his best weapon. How do you address that in the rematch?
Figueiredo: Actually, I couldn’t feel his hands touching me once. They were really light, and I’m sure he felt all my blows, even though I was not in my best; and if I don’t knock him out, I’ll smash him. I’ll take him down and punish him. He won’t stand up. I’ll have the pleasure to punish him three rounds and deform his face, so he learns to respect me and stop saying bulls--- about myself.

Gross: On the night of the fight, at a certain point did you stop feeling ill? When you’re in the locker room warming up, does that feeling go away or did you carry that into the cage?
Figueiredo: When I started to warm up, I forgot about how sick I was. As soon as the fight started, my only focus was knocking out Moreno. Of course, I knew that, due to my illness, the fight could go longer, but my focus all the time was knocking him out.

Gross: The reason I ask that question is because I think of you being ill and I think about great performances in sports when athletes are ill. People talk about Michael Jordan and Game 6 of the NBA Finals. Do you identify with any of that? You rose to the occasion even though you didn’t win by knockout in the first round.
Figueiredo: You know, not at all. My best performance will be when I’m 100 percent healthy. Even sick, I fought as a great warrior against [Moreno], who was in perfect condition. He can be sure that if I’m in my prime I’ll take him down and he won’t even move under my body.

Gross: The reason for this interview is that Sherdog.com and many other media are going to name you “Fighter of the Year” for 2020. What is the significance of this for you?
Figueiredo: I’m a very aggressive fighter. I always fight to decide as fast as possible. Being chosen the best fighter of the year just encourages me to train even more to keep taking the best of me in each fight. I’ll keep being aggressive so I can keep being recognized by fans and media.

Gross: How soon can you fight?
Figueiredo: I’m ready to fight Moreno in May. I want that small rest even while I want to correct some stuff and improve my game. By May, I’ll be ready to get Moreno, bringing lots of hate for him.

Gross: What motivated you coming into 2020? What was your vision for the year? Obviously, it turned out different than any of us have ever experienced.
Figueiredo: My big motivation was the loss of my grandfather. His biggest dream was to see me with a UFC belt, and after he passed away, I promised to myself I would pay his homage and hold it for a long time. (Figueiredo’s grandfather, João Leal de Deus, died on May 11 due to a stroke. He was 79.)

Gross: How big an influence was Alcantara on you? You met him at the age of 16, right when he was beginning his fighting career.
Figueiredo: Iuri was my first master. He taught me jiu-jitsu, boxing and muay Thai. He taught me to be tough. For sure, I’m strong right now because of Iuri’s influence and what Iuri taught me and my brother.

Gross: Can you share your recollection of 2020? What memories do you have of your four fights that stand out to you?
Figueiredo: For the first fight against Benavidez, I had to struggle to get the weight. I had a bad time; but like I said, I didn’t make the weight but I’d get a second-round knockout, and this is what I did. Between this fight and the fight for the belt, my grandfather died. This was devastating for me, but it made me stronger and I really wanted to be the champion. There was the struggle with the coronavirus because I tested positive and UFC almost took me out. I was able to fight and give a great performance that everybody saw. I said before the fight that Benavidez had never been submitted and I would submit him. I did in the first round. For the Perez fight, I can’t say anything. It was perfect. The camp was perfect. I felt wonderful. Everything was great, and I submitted Perez in the first round. For the Moreno fight, I was sick. That wasn’t me. I didn’t have problems making weight, but the recovery was the worst. Poison food. I still recovered. My mind won the fight because my body could not.

Gross: If you had the chance to do it over again and fight Moreno on short notice, would you have taken it despite being sick and knowing how it played out?
Figueiredo: You know, I’m the kind of fighter that loves to fight. I’m at my best, and I can fight twice in two weeks if the UFC needs. If I’m good, I’m going to fight. I’m here to honor my commitment to MMA and UFC.

Gross: In addition to smashing Moreno in May, what is your vision for 2021? What do you hope to accomplish in the new year?
Figueiredo: After proving to the world that Moreno is not able to face me in perfect conditions in May, I want to be the owner of that belt during the whole 2021. My plan is always to improve. My main plan is to give better fights to the fans in 2021 than in 2020.