Jorge Santiago-Kazuo Misaki 2 -- Sherdog’s “Fight of the Year” for 2010 -- was the kind of mixed martial arts contest fans and pundits point to as an example of why they believe their sport is the best in the world. Played out at Sengoku Raiden Championship 14 on Aug. 22 at the Ryogoku Kokugikan in Tokyo, it represents the kind of fight to which MMA supporters direct their friends on YouTube.

Interestingly enough, it was not the first time these two had engaged in such a larger-than-life, marathon struggle. At Sengoku “No Ran 2009” in January 2009, Santiago and Misaki met to determine who would become the fledgling promotion’s inaugural middleweight champion. It was a tense five-rounder Misaki was winning on points until a miraculous comeback in the final stanza saw the Brazilian put him to sleep with a fight-ending choke to capture Sengoku’s middleweight title.

A little more than a year and a half later, they were at it again. Few expected them to live up to their first encounter, and no one thought they could surpass it. Santiago and Misaki not only traded rounds but almost finished each other in every frame. It was the kind of give-and-take struggle MMA fans so rarely witness.

It came as no surprise that the fight took a toll on its participants. Misaki has no memory of the bout, outside of what he has seen on video.

“I was surprised at how the fight went. I thought, ‘Oh, wow, I did that?’ and ‘Hey, I could have finished him there,’ even if I didn’t remember those moments myself,” he said of his first review of the film. “On the one hand, I think [this fight] was only possible because we’re both very technically skilled fighters, but on the other, it was also only possible because of our spirit and emotions behind this fight. Both our first and second fights had great spirit in them.”

The champion, however, saw their second encounter as an opportunity to best what he felt was a poor performance in their first fight.

“I definitely consider Misaki the toughest opponent I could have faced in Japan,” Santiago said. “He proved that in Pride when he was the [grand prix] champion. After our first fight, when I fought him with a broken hand, I really wanted to face him again and make an even more exciting fight. That’s what happened.”

What happened was what every promoter wants in his or her event. Though World Victory Road President Toru Mukai was just as thrilled as the fans to witness the bout unfold, he was not without reservations.

“It was certainly a fantastic fight, one where both fighters could be considered winners and showed true warrior spirit, but to tell the truth, I wanted to stop it right in the middle,” said Mukai, with a paternal chuckle. “I was afraid because I thought that either one of these men could die in the ring that night.”

Misaki’s own cornermen shared those same concerns as the fight drew on.

“In the history of combat sports -- no wait, in the history of all sports -- this contest stands out. It was something you could accurately call ‘mortal combat,’” said Pride veteran Daiju Takase, who served as Misaki’s grappling coach during the match. “Every time Kazuo was on the attack, I thought, ‘He can do this!’ But because I knew what his physical condition was whenever he was under attack, I started praying.”

After a competitive first round, Misaki stole the second period, nearly choking out Santiago with a tight guillotine. 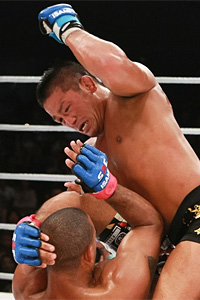 File Photo
Oh yes, Misaki had his moments.
“In that guillotine, I was really in trouble,” said the self-effacing champion. “I think at other moments, too, he was on my back and then trying to get the [arm triangle], and I was thinking, ‘S--t!’ In my mind, I felt I was behind. [During a fight], some people will tell me ‘You’re even,’ or they’ll say, ‘You’re winning,’ but I always think I’m behind.”

Santiago rebounded in the third round with a high kick-right straight combination, nearly stopping Misaki with punches on the ground before being foiled by the ring ropes. The roller-coaster fight then swung back in the challenger’s favor in the same frame, as Misaki shocked Santiago with a left hook and followed up with punches and knees to the head. Santiago, whether willfully or instinctively, fell out of the ring, earning a severe rebuke and red card from referee Yoshinori Umeki.

“If it was in the cage,” said Takase, ever the outspoken critic, “the fight would definitely have ended there.”

Fortunately for the fans, it did not. With judges Masato Fukuda, Tenshin Matsumoto and Ryogaku Wada carrying Misaki cards of 39-36, 38-36 and 38-36 into the fifth and final round, Santiago’s back was to the wall. If he could not produce a 10-8 round for the 46-46 draw on judges Matsumoto and Wada’s scorecards and hold out hope for the must-decision after the final bell, he would likely lose the title.

“My worst moment was when he knocked me down in the fourth round,” Santiago said, “but my best moment was in the last minute of the fifth, when I finished him.”

In the fifth period, Santiago dug deep and produced more than a 10-8 round for the necessary draw. He rained brutal punches on the challenger from top position for four and a half minutes, until Misaki’s corner threw in the towel. Official time was 4:31.

Whether the bout would have resulted in a draw or not if Misaki had survived to the final bell, his chances to pick up his first title since being crowned the Pride 2006 welterweight grand prix winner were high. To some onlookers, the corner stoppage was a source of debate, but it was a decision none of the participants seem to begrudge.

“Whether I would have won if the towel wasn’t thrown in is not something I think about, so I don’t feel any regrets over it,” Misaki said. “Besides, cornermen have a responsibility to protect their fighter. That’s why I’m able to be here now, talking to you. For that, I’m very grateful to them.”

“From the midway point, Kazuo couldn’t remember anything because he was so exhausted. He was fighting completely on spirit alone,” said Takase. “His striking coach threw in the towel. Misaki would never tap, so it’s a bit unfortunate. I’m confident he could have won, but protecting your fighter’s health is of the utmost and proper consideration.”

With two titanic and taxing encounters with the Brazilian in the books, it would seem understandable if Misaki resigned himself to never facing Santiago again. However, as is often seen in MMA, fighting so fiercely and thoroughly with an opponent rarely breeds contempt or resignation. Misaki appears convinced that he and Santiago are bound by destiny and key to each other’s personal growth.

“As a professional fighter, I think it was a great experience to fight him, but aside from that, he’s also helped me grow and change a lot, just in life. It doesn’t matter who won. I’m very grateful for him and having had the chance to fight him,” Misaki said solemnly. “I think we will probably meet again because I don’t think that this fight was the end of our story. Even though the towel was thrown in at the end, I think there’s still one more drama to be played out by the both of us. I think it’s our destiny to meet again.”

The champion also thinks highly of Misaki and does not seem to mind the prospect of a third encounter, if fans want it.

“He’s a tiger, you know? He has that fire in his eyes and in his heart. I do, too. We’re the same. We both feel like we’re not going to just give a fight to anybody,” Santiago said. “Like he was saying [at the press conference], the champion of this bout is going to be the one who wants it more, who has more will. I think if we always fight with that mindset, we’ll always put on great shows.”

Until the day of their third meeting comes, however, their second fight will remain prominent in the hearts and minds of those who experienced it firsthand.

“One thing I’ll never forget is how gassed Kazuo was in the last round, but he was still trying desperately to get out of mount,” Takase said. “He couldn’t even breathe properly, yet he was still in the fight. Even if he could have died in there, he wouldn’t give up. It’s an example that I think, more than just fighters, everyone should follow. Even recalling it now, I’m moved by it.”

“It was a magnificent fight, and I think it made the audience come together as one,” Mukai said. “As far as MMA goes, I think it’s one of the best fights ever.”

For Misaki, it was a life-altering experience.

“I don’t know if I’ll still be alive in 10 or 20 years. If I am still alive, I think it would be because of fights like these with Santiago,” he said. “That’s also why I think it’s our destiny to face each other. Again, I’m grateful for the chance to fight against someone like him, and in 10 or 20 years, I’ll still think the same.”

Marcelo Alonso contributed to this report.