Those are the words of a man many consider the greatest fighter of all time, Muhammad Ali. They also provide an apt description of UFC heavyweight champion Cain Velasquez, Sherdog’s “Fighter of the Year” for 2010.

“I am honored to be recognized for all the hard work I have put in, but I still have a lot to learn,” Velasquez said. “I want to get back to work as soon as possible. I’ve got a job to do. I want to defend the belt for years to come.”

The humble, hard-working technician was immediately tagged as a can’t-miss prospect, destined to rule over the heavyweight division, when he made the transition to mixed martial arts after wrapping up an impressive collegiate wrestling career in 2006. He realized those expectations in a thoroughly dominating performance over Brock Lesnar at UFC 121 in October. The massacre took just 4:12 to unfold, but it left an ineffaceable image seared into the collective psyche of the MMA world.

Here was a man who had put together all the aspects of the complex, violent ballet that is mixed martial arts. He had done so upon a base of amateur wrestling -- the sturdiest of foundations -- and had married those skills to a blue-collar work ethic. He had found an environment wholly suited to nurturing and mentoring him into a championship caliber fighter. And now he had reached the pinnacle of his profession in the most spectacular of fashions, laying waste to the latest “Baddest Man on the Planet.”

Velasquez, at 28 years of age, had officially arrived.

His rise to “Fighter of the Year” was cemented after he dethroned Lesnar, but it began with a highlight-reel knockout of former UFC and Pride Fighting Championships heavyweight titleholder Antonio Rodrigo Nogueira in February.

The UFC 110 fight was supposed to represent the first real test for the blue-chip prospect, but it became apparent early in the opening round that this was more akin to mob hit, with the new boss doing the shooting. He pelted Nogueira early and often with hard, stinging leg kicks and followed up with slick combinations that left the Brazilian legend guessing. Then, a little more than two minutes into the fight, Velasquez delivered a surgically placed right hand that detonated any hopes for a Nogueira renaissance. 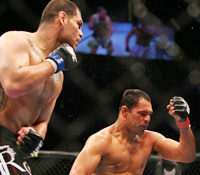 D. Herbertson
Velasquez mauled "Minotauro."
The popular former champion melted to the floor, only to be rocked back-and-forth from consciousness by five straight punches, all before the referee could close the short distance and rescue him. The heavyweight division was officially on notice.

Just nine starts into his professional campaign, Velasquez has established himself as the top heavyweight in the world. However, he remains a relative MMA neophyte, loaded with untapped potential.

“He still has to prove it in the cage, but he keeps getting better every day. I know he is the best, but he has more work to do before everyone realizes what I already know: he is the best pound-for-pound fighter in the world.”

Even though Velasquez has already reached the top of the UFC heavyweight division, his coach can envision an even more lethal version of the determined pugilist.

“I would say he is at about 75 percent in his kickboxing, 50 percent in his boxing, 75 percent in jiu-jitsu, and we all know he has the wrestling down,” said Mendez. “There is plenty of room for him to keep getting better, and he will get better.”

Another Velasquez coach, Bob Cook, echoed Mendez’s sentiments. Always known as an honest assessor of his own fighters’ talents, Cook, a bit more cautiously, finds it easy to heap praise upon his prize pupil.

“Cain makes things very easy for us,” said Cook, a UFC veteran. “If we don’t have him out doing [public relations] work, he keeps a pretty regular schedule, from home to the gym to his favorite taqueria and then does it all over again the next day. He really is a simple guy who wants to be the best. It is family, then fighting, and not a whole lot else.”

The ability to cordon off all of the distractions and remain focused on being the best in the world is a central characteristic of most great athletes, and Velasquez seems to have it. With all the commotion surrounding his bout with Lesnar, he remained clear in his resolve and authored one of the more memorable moments in MMA history. That performance capped a brilliant calendar year for the UFC champion and gave fans and critics alike a glimpse of what appears to be a storied career in the making.

There are still a few challenges his coaches feel he will have to overcome before he can be considered among the greats. Although Velasquez had his chin and resolve tested in a 2009 bout against Cheick Kongo, he has faced relatively little adversity in his fights -- a fact his handlers know will change. Despite the fact that they believe he will pass with flying colors, it remains to be seen how he will react.

“If you truly want to be considered to be great,” said Cook, “you need to find a way to win when you have an off night. Everyone experiences it sometime in their career, and to be able to do what it takes to get past tough guys when things aren’t going your way, that is one of the things the great fighters can do.”