Knockouts are what make combat sports a little different.

Whether it’s football, baseball, basketball or hockey, a team hopelessly behind is nonetheless tied to its fate, forced to finish out the game. But in fighting sports, the possibility of a knockout is what keeps things interesting. No matter how far behind you are, one well-placed strike can turn everything on its ear.

They come in all shapes and sizes, especially in MMA, where the tools of the trade vary considerably. Placed in the context of a meaningful event with high stakes, a knockout can do wonders to your reputation, for better or for worse.

That’s why Fedor Emelianenko’s stoppage of Andrei Arlovski at the Jan. 24 Affliction show is Sherdog’s 2009 KO of the Year. Going into the match, Emelianenko was regarded as the world’s best heavyweight and maybe its best fighter pound-for-pound. Against the talented Arlovski, though, he figured to run up against the kind of challenge he hadn’t seen in the nearly three years since outpointing Mirko “Cro Cop” Filipovic.

It figured Arlovski would bring more to the dance, given his 6-foot-4 frame, striking and athletic ability. While his physical game was unquestioned, Arlovski had suffered from hot and cold performances since losing his UFC title to Tim Sylvia in 2006. At times overwhelming and at other times seemingly disinterested, the ex-champ knew his work was cut out for him against Emelianenko.

Arlovski looked confident that he could use his four-inch height advantage, snapping a hard low kick home in the opening seconds. He then slipped a Fedor right and landed home a crisp cross counter. While Fedor’s standup will never be featured in a striking textbook, the champ’s sense of timing and the ability to explode into small openings make his blows effective and opponents wary of opening up.

But Arlovski wasn’t fazed, using his sharp boxing and reach to slip in and out of range, landing a punch here, a kick there, setting the seeds for what seemed an upset. As the round progressed, Andrei’s confidence seemed to grow as Fedor’s aura appeared to chip away, bit-by-bit. At 4:05 in the round, Arlovski landed a glancing right, a couple of slapping low kicks. Then 15 seconds later, another nice counter cross as Fedor missed after wading in for a finisher that seemed to evaporate as Andrei smartly moved back.

Frustrated from range, Emelianenko did what the great ones always do: He took it elsewhere. 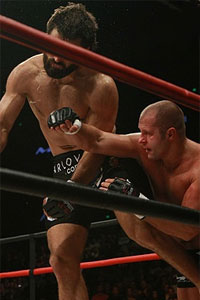 Dave Mandel/Sherdog.com
Fedor's knockout was impressive.
Tying up Arlovski on the ropes, he roughed him up with a quick knee to the midsection, only to find himself on the defensive, falling back and bouncing off the ropes to avoid a pair of upper-body toss takedowns. After more inconclusive clinch work, the pair were separated at 2:30 and resumed standup action. With each Arlovski attack, Fedor seemed to be registering the proper angles for a counter, but Andrei kept switching up. He connected with a nice right lead at 2:11 that clearly got Fedor’s attention and mixed in a stiff body jab moments later, backing Fedor into a corner.

If you hadn’t believed it by now, it was clear -- Arlovski was beating Emelianenko to the punch, and, it seemed, setting the stage for something spectacular. Arlovski landed another right hand, driving Fedor again into the corner, another perfect strike that scored points while denying Fedor the range to fire back.

Driving Fedor into the corner with a quick left push kick, Arlovski, feeling his oats, stepped into what was to be a flying left knee. But Emelianenko countered with a booming right hand that landed flush on the chin with Arlovski sailing toward him. The stunning turnaround only cemented Emelianenko’s reputation as a great fighter, one able to exploit the smallest openings and make the most of them, regardless of what the other guy has done to him.

Interestingly, both men would fight Brett Rogers in their next bouts, with results mimicking the outcome of their KO of the Year match. In the June Strikeforce show, Arlovski was taken out in 22 seconds by Rogers in an upset that sent shockwaves through the sport and earned Rogers a shot against Emelianenko. In their Nov. 7 showdown, which headlined Strikeforce’s debut on CBS, Emelianenko survived a damaged nose and some scary moments before landing a thundering right hand that turned the momentum of the bout on its head for a KO finish.

That’s what makes Fedor and the rest of us fortunate enough to merely live in his world.

Dan Henderson KO 2 Michael Bisping With trash talk aplenty, perhaps the objective lesson here -- at least for Bisping and other young up and comers facing veterans like Henderson -- is to let sleeping dogs lie. With bad blood and middleweight mojo on the line, Henderson took a round to gauge the striking of Bisping, who flitted in and out without really planting his feet or landing anything effective.

In the second round, Henderson delivered the bomb, his trademark overhand right, sending Bisping toppling to the canvas. With what is perhaps one of the more delicious finishes in recent years, Henderson pounced on a hapless Bisping as he lay on the canvas, connecting on a doozy of a right hand before being pulled off.

Lyoto Machida KO 2 Rashad Evans As the defending UFC light heavyweight boss with a 14-0-1 record to boot, Evans was probably one of a handful of undisputed, unbeaten champs in any combat sport to enter his first defense as an underdog. Given the 2-1 favorite line the sportsbooks were giving him, challenger Lyoto Machida had been impressive dusting off a string of 205-pounders en route to his title shot.

After a largely uneventful first round, where Machida and Evans circled and elicited some boos from the crowd, the Brazilian karate stylist let loose in the second. Known for his unorthodox blending of karate, foot sweeps and precision counters, Machida stunned Evans with a nifty left hand and then finished the job with a pinpoint onslaught that seemed otherworldly. It was the proper way to win a title and a nice beginning to a reign that got controversial, and competitive, with his close decision over Mauricio “Shogun” Rua months later.