Robbie Lawler could barely stand, but he had one good right hand left in him.

Lawler, the inside of his lead leg mangled by a series of vicious kicks, unleashed an overhand right on the unsuspecting Melvin Manhoef in a featured middleweight duel at Strikeforce “Miami” on Jan. 30 at the BankAtlantic Center in Sunrise, Fla. Home to the National Hockey League’s Florida Panthers, the venue had witnessed its share of memorable mixed martial arts violence -- Seth Petruzelli on Kimbo Slice and Benji Radach on Murilo “Ninja” Rua at EliteXC “Heat” in 2008 spring to mind -- but nothing there had approached the Lawler-Manhoef outcome in terms of intensity, drama and utter brutality.

A shade more than three and a half minutes after the fight began, Manhoef lay on his back, that unsettling fifth-dimension stare etched across his face. He was the victim in Sherdog’s “Knockout of the Year” for 2010.

“I was thinking, ‘I have to finish him,’” Lawler said. “I wasn’t sure how long I’d be able to continue fighting the way I was, so I just kept pushing and pushing and was able to land a big shot.”

A dozen leg kicks from the Dutchman had slammed into the inside of Lawler’s right knee and thigh by the time it ended. At times, it appeared as if the limb might fly right out of the cage, so brutal were the impacts. Manhoef’s measured attack caught the Lawler camp by surprise.

“We actually expected a more aggressive Manhoef, but he chose to keep great space and throw leg kicks,” said Matt Pena, Lawler’s longtime boxing coach. “It was pretty amazing to see the speed at which he was delivering such powerful shots.

“There was a moment in the fight where Rob winced from twisting his ankle, and I thought in my head for a split second, ‘How is Rob gonna be able to plant and push off that leg?’” Pena added. “We didn’t think Manhoef would take so long to begin to open up with his hands. The first few times that he did, I was pleading for Rob to punch off of the blocked shots, but he didn’t have him quite timed yet and he didn’t want to get careless.” 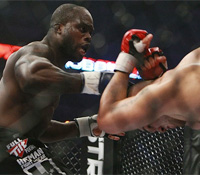 
Lawler knew an opportunity would present itself, if he could withstand the punishment. He had studied Manhoef’s tendencies on film.

“I always look at video for fights, and Rob did, too, for this particular match,” Pena said. “The things that we noticed is how vulnerable Melvin is when he thinks someone is about to go, or when he thinks he’s at a superior striking advantage. He gets overaggressive, overcommits and keeps his chin in the air. When he got KO’d in the past, these were his habits, so we knew if Rob caught him there that he could knock him out.”

Manhoef followed just such a pattern against the former EliteXC middleweight champion. After cracking Lawler with another inside leg kick, he drew his guns and attacked. Figuring his foe was on his way out, Manhoef pawed with a left jab and backed Lawler against the cage. However, in his haste, the K-1 veteran let his guard down as he prepped himself to throw what he undoubtedly believed would be the finishing blows. Lawler capitalized, as he launched a perfectly timed and placed overhand right that wobbled Manhoef and dropped him where he stood.

“I had one of the best seats in the house that night,” Pena said. “When Robbie landed that punch, Manhoef’s neck snapped around to where I saw his eyes as he was falling. I was telling [UFC hall of famer and Lawler cornerman Matt] Hughes that it was over as Melvin hit the ground.”

Manhoef collapsed to his side, foggy as he fell, and Lawler uncorked a devastating standing-to-ground left that rendered him unconscious. Another blow dropped for good measure, as the referee dove into save the defenseless Dutchman from further abuse. Quickly surrounded by cage-side medical personnel, Manhoef did not emerge from his slumber for several tense moments. The triumphant Lawler limped around the cage gingerly, his handiwork at his feet.

“Rob landing that punch definitely sent out a reminder that he, too, is one of the premier power punching fighters in the sport,” Pena said, “but I think it said more about his conditioning and heart.”

Though the outcome was to their liking, Pena admits not all went according to plan.

“In a perfect world, Rob would have gone out there, secured a takedown, grinded Manhoef down to tire him and then knocked him out standing or with some ground-and-pound,” he said. “There’s a moment where you do see Rob look for a shot, but Manhoef kept good space and made Rob feel vulnerable with trying to close the distance. So, Rob made the adjustments and went to Plan B.”

According to Pena, Manhoef himself added fuel to Lawler’s pre-fight fire.

“Even as all the fighters were meeting in the lobby to be shuttled to the event, Manhoef spent 10 minutes mean mugging every member in our camp, trying to intimidate us,” he said. “It’s one thing to try to intimidate your opponent, but to have someone try to intimidate our camp was something new to me. As tight as we all are, I knew that when Robbie saw this going on, it was gonna be a special night.”