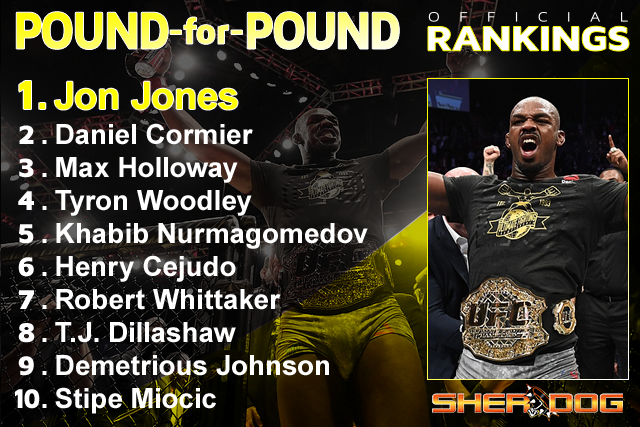 A little less than three years ago, Henry Cejudo looked out of his depth in a flyweight title shot against Demetrious Johnson at UFC 197.

At the time, it would have been hard to imagine that “The Messenger” would ascend to the lofty position he currently occupies, as one of the top pound-for-pound fighters in the sport. Not only has Cejudo avenged the loss to Johnson -- a fighter many regarded as the world’s best in any weight class -- but he retained his 125-pound belt with a shockingly quick stoppage of reigning bantamweight king T.J. Dillashaw in his most recent outing at UFC Fight Night 143 in Brooklyn, New York. Few fighters can claim such an impressive set of back-to-back victories, and it’s now safe to say Cejudo’s MMA achievements have caught up to his golden pedigree.

Thanks to his 32-second TKO of Dillashaw -- disputed though it may be -- Cejudo climbs past Robert Whittaker to the No. 6 spot in our latest pound-for-pound poll. Whether he is allowed to continue his reign atop the UFC’s flyweight division is up to the Las Vegas-based promotion. Regardless of what the future may hold, Cejudo has earned his place. Dillashaw, still very much in the discussion for bantamweight “GOAT,” only slips to the eighth spot following the disappointing setback.

As long as Jones stays out of trouble, there is no better fighter at 205 pounds. The Jackson-Wink MMA standout reminded the world of his greatness at UFC 232, when he emphatically defeated Alexander Gustafsson by third-round technical knockout at the Forum in Inglewood, Calif. It was a far cry from their first meeting at UFC 165 in 2013, when the lanky Swede took Jones to the brink of defeat before losing a unanimous decision. After dispatching Gustafsson, Jones vowed to have an active 2019, and he’ll get a jumpstart on those plans by defending his belt against Anthony Smith in the UFC 235 headliner on March 2.

The best thing you can say about Cormier’s effort at UFC 230 was that it was predictable. “DC” landed multiple takedowns on underdog Derrick Lewis before securing a tapout with a rear-naked choke at the 2:14 mark of the second stanza. Cormier became the first fighter to defend titles from two divisions in UFC history. Cormier previously set March 20 as a retirement date, but with both upcoming pay-per-view events having already booked headliners, “DC” could fight on past his 40th birthday.

Woodley continues to make his case to be known as the “Greatest of All Time” at welterweight. In the UFC 228 headliner, “The Chosen One” dispatched Darren Till via second-round submission, tapping out his English opponent with a brabo choke in the second frame. Woodley is unbeaten in his last seven Octagon appearances and the owner of the longest active title defense streak in the UFC. He’ll look to add to his resume when he faces Kamaru Usman in the UFC 235 co-main event on March 2 in Las Vegas.

Few fighters have authored a pair of back-to-back triumphs like Cejudo. After edging pound-for-pound great Demetrious Johnson to claim flyweight gold at UFC 227, the Olympic gold medalist needed just 32 seconds to dispatch reigning bantamweight king T.J. Dillashaw in the UFC Brooklyn headliner to retain his title. Plenty of uncertainty remains regarding the future of the flyweight division in the UFC, but Cejudo made a strong case to keep it around for a while longer. At the least, he seems to have set up a rematch with Dillashaw for the 135-pound belt down the road.

Few could have expected Dillashaw to fall to Henry Cejudo in just 32 seconds at UFC Brooklyn. While the reigning bantamweight champion is adamant that the stoppage was early — he called it “complete bulls—t” at the post-fight press conference — it’s unclear if he will be granted a rematch at 125 pounds. Dillashaw, who had won eight of nine bouts prior to facing Cejudo, remains the No. 1 fighter in the world at bantamweight and figures to have a number of interesting options for his next Octagon appearance, including a rematch with the Olympic gold medalist at 135 pounds.

All good things must come to an end, including Johnson’s record streak of 11 successful flyweight title defenses. “Mighty Mouse” did not go down easily, losing a tension-filled split decision to Henry Cejudo in the UFC 227 co-main event at the Staples Center in Los Angeles. With that, Johnson’s run in the UFC has reached its end, as the promotion “traded” the pound-for-pound stalwart’s contract for that of former One Championship and Bellator welterweight titlist Ben Askren. Johnson is scheduled to take part in One’s upcoming 125-pound grand prix tournament, beginning with a matchup against Yuya Wakamatsu on March 31.