A definitive win compressed into a mere 69 seconds, Fabricio Werdum’s triangle of Fedor Emelianenko on June 26 at the HP Pavilion in San Jose, Calif., was a reminder that every fighter is beatable when caught up, long enough, in the other guy’s world.

With Emelianenko carrying into the bout the gold standard of career consistency and the mantle of the world’s best heavyweight, Werdum’s finisher resonated across the mixed martial arts world, making it Sherdog’s “Submission of the Year” for 2010.

Werdum’s triangle did more than just snap Emelianenko’s 10-year unbeaten streak. The submission made the most intimidating and overwhelming fighter in the history of the game look thoroughly human.

“I’ve been training that position since I was a white belt,” said Werdum. “It’s a position I’m very comfortable with.”

Werdum added that switching back and forth from the triangle to the arm bar, while a basic technique taught in early jiu-jitsu training, is not something that is acquired overnight.

As a former Brazilian jiu-jitsu world champion and two-time Abu Dhabi Combat Club Submission Wrestling World Championships winner in the heavyweight bracket, Werdum’s grappling credentials are top-notch. And going into the bout, his preparation and revamped diet had him weighing a trim 238 pounds, with his confidence soaring.

It could not have played out any better for Werdum.

“I put Fedor in trouble with my best weapon -- my triangle. I took away his balance,” he said. “And when he went in my guard, I knew I was going to win the fight.”

Werdum, like most other top heavyweights, could practice for 10 years and never generate the concussive power Emelianenko generates when unleashing his fists. Outside of a select few heavyweights, few will ever possess the combination of spatial awareness and body control the Russian demonstrates in seemingly wild exchanges, whether it is trading blows or hitting the mat to seize dominant position.

Werdum has basically trained his whole life for people to play the jiu-jitsu game with him, which is why MMA remains the ultimate equalizer and proving ground for combat athletes. He knew he could deliver the upset if only the fight went into his pre-selected groove, on his back, hunting for an opening, a limb, anything available. It happened in the opening moments of the bout, off a sequence that seemed like disaster was unfolding for the seemingly outmatched Brazilian.

As the two began the bout, Emelianenko crept forward, then unleashed six punches, so fast that even on replay it was hard to tell what landed clean and what missed. Werdum fell to his back, but that was part of the plan, he explains. Get it down to the mat, and lure Emelianenko into his world. Play his aggression against him. 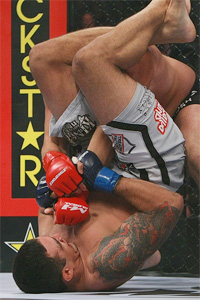 D. Mandel
“I used it as a setup to pull the fight to the ground,” Werdum said. “With Fedor, you can’t start the fight with a shoot. I felt the right hand come, and then I sat down. His right punch didn’t hit me. Then I dropped and pulled him into my game.”

Emelianenko obliged, diving into Werdum’s guard and making the kind of tiny error that differentiates between great submission artists and everyone else. His left arm was deep in Werdum’s guard, and the Brazilian pounced. Seizing the limb as Fedor attempted to counter an obviously developing triangle-armbar setup, Werdum held tight, rolling underneath the circling Russian to re-establish the critical angle he needed.

“When I feel Fedor was going to try and escape, when he posted up, I could switch the submission to the arm. If he went to down, I could work the triangle,” Werdum said. “I train, so it works out that it puts him in trouble either way.”

After dropping down to the canvas following Emelianenko’s opening-moments salvo, Werdum, who insisted he was not hurt, felt a surge of excitement as the former Pride Fighting Championships titleholder powered ahead into his guard.

“I just dropped down and pulled him into my game,” he said. “A lot of guys fight with Fedor, and they try and exchange. I wanted to put this into [a] jiu-jitsu [contest].”

At that point, even casual fans knew Emelianenko was in serious trouble. Finally, after the triangle was cinched deep, with Werdum yanking down on his head and extending his arm to increase the futility of the position, the great Russian tapped once in a gesture that was understated and humble.

With his penchant for rallying out of bad spots -- whether it was being slammed on his head by Kevin Randleman, drilled into doing the stanky-leg dance against Kazuyuki Fujita or bloodied and thumped up by Brett Rogers -- Emelianenko’s prescription in dealing with such rough spots was always the same, and it was as inevitable as death and taxes.

“
I’ve been training
that position since
I was a white belt.

He simply stormed back and overwhelmed opponents. All the more reason why the Werdum fight was equal parts sobering and stunning, as Emelianenko, for once, never got a chance. Werdum found his opening and pounced, sticking the knife in deep for the kill before Emelianenko could formulate a response.

While other Submission of the Year winners -- 2009 winner Toby Imada’s reverse triangle over Jorge Masdival comes to mind -- have won due to their exotic appeal, this was not one of those. It was a reminder of what an unbeaten streak like Emelianenko’s means in terms of consistency and execution on a fight-by-fight basis. With a record of 32-1 entering the bout, Emelianenko’s high-wire act stood on its own in terms of dodging the inevitable. The fight was a prime example of how many ways there are to lose in a sport where nobody can be the best at the multiple disciplines involved.

Finally, after years of steamrolling opponents and rallying through the occasional dramatic rough spot with his trademark fury, the great Emelianenko was beaten.