Not long after his unanimous decision victory against Tyson Griffin at UFC 90 on Saturday, former lightweight champion Sean Sherk made his next target known. When Kenny Florian and Joe Stevenson collide next month at UFC 91, Sherk will have a vested interest in the outcome.

“Hopefully, I get to fight the winner of Kenny and Joe next,” said Sherk, whose bid to recapture the UFC 155-pound title failed in a technical knockout loss to B.J. Penn in May.

Based out of the Minnesota Martial Arts Academy, Sherk already holds a decisive victory over Florian. He earned a unanimous decision against the Brazilian jiu-jitsu black belt in a bloody five-round title bout at UFC 64 in October 2006.

An accomplished amateur wrestler, Sherk relied mostly on his underrated boxing skills in his riveting match with Griffin. The victory, Sherk’s third in four fights since moving to lightweight, came against one of the UFC’s young lions and re-established the Minnesotan as a major player in the division.

“The lightweight division’s stacked,” Sherk said. “That’s the reason I asked Joe [Silva] to fight Tyson. I know Tyson’s a top contender. Everyone likes him. He’s exciting. I thought that we’d make a great fight, and I thought the winner of this fight would hopefully be lined up for another shot at a belt.”

Sherk (33-3-1) -- whose three losses have come against Penn, reigning UFC welterweight king Georges St. Pierre and future hall of famer Matt Hughes -- handed Griffin just the second defeat of his career. Using lightning-quick combinations and well-timed takedowns, he outpointed the 24-year-old Californian by scores of 30-27, 29-28 and 29-28. 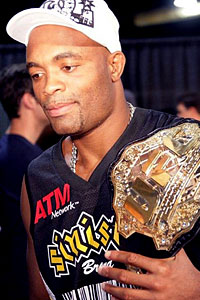 Middleweight champion Anderson Silva tied the record for most consecutive wins inside the Octagon with his eighth in a row at UFC 90. What makes the Brazilian’s march through the 185-pound division all the more remarkable is the fact that his seven opponents -- he beat Rich Franklin twice -- have a combined winning percentage of .762.

His latest conquest, however, was by far the least fulfilling, as Silva retained his belt when Canadian challenger Patrick Cote went down with an injured knee early in the third round and was unable to continue.

What’s worse, Silva drew criticism from media and fans for his antics during the first two rounds of the fight. The 33-year-old won those periods easily but danced, shuffled and moved more than he engaged. Yahoo! Sports columnist Dan Wetzel questioned whether or not Silva had become “bored” during his reign and compared his actions to those of Muhammad Ali. According to Silva, it was all by design.

Silva (23-4) had not been pulled into a third round since his submission loss to Ryo Chonan at Pride “Shockwave 2004” in December 2004.

Brazilian heavyweight Junior dos Santos did more than raise a few eyebrows with his stunning first-round knockout against Fabricio Werdum at UFC 90. He fattened his bank account in the process.

Santos (7-1) pocketed a $65,000 “Knockout of the Night” bonus after he landed a devastating right uppercut and buckled the favored Werdum 1:21 into their match. He caught the ducking Brazilian jiu-jitsu black belt on the chin and finished him off with unanswered ground strikes.

“My coaching staff and I studied his fights a lot, and I knew I had a better chance of winning the fight standing up than I did on the ground,” dos Santos said. “It played out like I expected. I noticed in his fights that he would duck down once in a while. I threw a jab, he ducked and I landed the upper[cut]; that’s how it went.”

Believed to be among a handful of elite heavyweights under UFC contract, Werdum -- who survived earlier bouts with Alistair Overeem, Sergei Kharitonov and Aleksander Emelianenko -- had never been knocked out previously.

Santos was not the only beneficiary of the post-fight cash flow.

Sherk and Griffin received matching $65,000 “Fight of the Night” bonuses, and lightweight Spencer Fisher banked $65,000 for “Submission of the Night” after he coaxed a tapout from Shannon Gugerty with a third-round triangle choke. 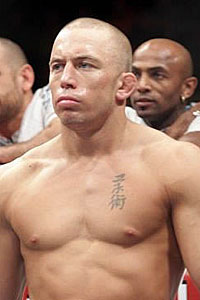 Photo by Sherdog.com
Is GSP next for ATT
slugger Thiago Alves?
Is St. Pierre next for Alves?

Riding an impressive seven-fight winning streak, American Top Team striker Thiago Alves declared himself fit for a matchup with St. Pierre or B.J. Penn in 2009. St. Pierre will defend his welterweight crown against Penn at UFC 94 in January. Might a date with Alves await the winner?

“I think I’m ready, but it’s up to [UFC President] Dana White and UFC management,” Alves said. “It doesn’t really matter who it is. Whoever’s the champion, I’m ready. I don’t want to wait, but if I have to wait, I’ll wait.”

Alves (16-3) cruised to a unanimous decision against the highly regarded Josh Koscheck in the co-featured bout at UFC 90. The 25-year-old Brazilian, having established himself as the most-feared striker in the 170-pound division, wobbled Koscheck with a left hook in the first round and threatened him with knees, punches and elbows throughout.

“He definitely came to fight,” Koscheck said. “I think that his takedown defense was very good, and, obviously, he has a lot of power in his punches and kicks. I have no excuses. He was just better [Saturday]. He was the better fighter, and he deserved to win.”

Koscheck still plans to headline the UFC Fight Night 16 show against Yoshiyuki Yoshida on Dec. 10 at the Crown Coliseum in Fayetteville, N.C. “I’m looking forward to Dec. 10, because I’m going to get back on track,” he said. “I’m going to put on an exciting fight. I can guarantee that.” Yoshida will enter the match on a nine-fight winning streak … Thales Leites needed just 78 seconds to submit Drew McFedries in a preliminary bout at UFC 90. It was his quickest submission win since he forced a tapout from Jason Guida in 1:38 in 2005 … Fisher’s victory over Gugerty was his first by submission inside the Octagon in more than three years. The 32-year-old North Carolinian has become almost exclusively a stand-up fighter since he submitted Alves in his UFC debut back in 2005 … UFC 90 drew 15,359 fans to the Allstate Arena, resulting in a $2.8 million gate.