SUNRISE, Fla. -- Welterweight champion Jake Shields survived a stern test and retained his title with a second-round submission against Paul Daley before a crowd of 9,414 at EliteXC “Heat” on Saturday at the BankAtlantic Center.

Having won 11 consecutive fights, Shields (23-4-1) mentioned the possibility of moving up to 185 pounds to challenge for the EliteXC middleweight crown, currently worn by Robbie Lawler.

Methodical to a fault at times, Shields struggled to put away Daley. He mounted the British striker with 3:15 left in the first round and remained there for much of the period. Shields threatened with an armbar, only to be swept onto his back by Daley as time ticked away in the round. Daley dropped a series of elbows from top position as the round came to a close, letting Shields know he still had a fight on his hands.

Daley (18-7-2) stuffed Shields’ first two takedown attempts in the second round, but the Brazilian jiu-jitsu black belt from San Francisco stuck to his game plan. Shields scored with a takedown and moved straight to mount with 2:55 to go in the stanza. He then maneuvered into position for the armbar and, after a brief and fruitless struggle from Daley, coaxed the tapout 3:40 into round two. 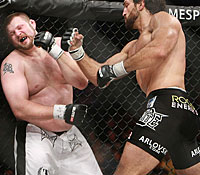 Nelson, a titleholder in the now defunct International Fight League, met his end 3:14 into round two, when Arlovski bounced him off the cage and onto his face with a right uppercut and straight right. Nelson rose soon after, threw his mouthpiece skyward and protested the stoppage, about which there was no controversy.

Arlovski (14-5), a winner in five straight, could be next in line to face the incomparable Emelianenko sometime in early 2009 should the stars align under the Affliction banner in January.

The 29-year-old Belarusian weathered Nelson’s efforts to stifle the standup action early. Nelson effectively clinched in the first round and wound up in top position in the first round. However, he could not score effectively, and the referee eventually brought the heavyweights back to their feet.

Arlovski provided a taste of what was to come late in the round, as he landed a powerful low kick-left hook combination that got Nelson’s attention and poured life into the crowd. 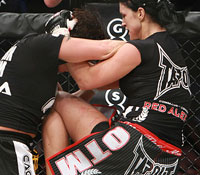 Dave Mandel/Sherdog.com
Carano (right) vs. Kobald
The 26-year-old Carano, who hit the scales three times to make weight Friday, fended off Kobold’s takedown efforts throughout the 140-pound contest, and relied on improved footwork and a persistent right jab to score consistently.

St. Paul, Minn. native Kobold (16-2-1) exerted considerable energy bullying Carano against the fence, but couldn’t secure the single-leg takedown on two occasions in the first round. Carano later circled centerstage and unloaded punches and knees from the head clinch, while Kobold returned ample fire back at her lankier foe.

Kobold connected with more precision in the second round, but made her real intentions known as she continued to corner Carano on the fence to get her to the mat. Kobold nailed her first takedown with 20 seconds remaining in the second round, where Carano went straight for a triangle choke attempt, then covered up to beat out the clock.

Cut over her right eye, Kobold swung for the fences in the final stanza, but Carano had found her range and rhythm, punctuating the victory with a series of roundhouse kicks that riddled Kobold’s face and body.

“I think yes, this was my toughest battle for sure,” said Carano. “She just kept coming and laying on me. I was a little aggravated.”

While Carano moved to an unblemished 7-0, arising nemesis Cristiane "Cyborg" Santos (6-1) -- who was also victorious earlier that evening -- took in the bout cageside. A fight between the two fearsome strikers will be the highest-profile women’s bout for the sport to date.

“If that's who they put me in front of me,” Carano answered to a proposed bout with the aggressive Brazilian. “She's an awesome fighter. Once again, just like fighting Kelly, it will be an honor.” 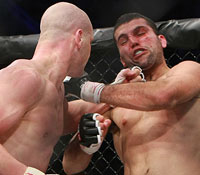 Dave Mandel/Sherdog.com
Radach (left) vs. Rua
Benji Radach teed off on Murilo "Ninja" Rua during the first minute of their middleweight matchup. The 29-year-old native of Castle Rock, Wash., landed an uppercut and a left hook, and soon Rua was stumbling around the cage while Radach chased after him with haymaker after haymaker.

Instead of picking his shots, Radach kept winging big punches that missed much more than they landed. Rua, 28, was hurt, but the longer he held on, the more tired Radach became.

Halfway into the five-minute first round, Rua seemed to recover. He gave up a takedown but then attacked Radach with heel hook attempts and closed the period punching from the side of Radach’s back.

Rua came out the aggressor in the second. He threw knees and kicks and pursued a backpedaling Radach around the cage. Two minutes into the round, however, Rua fell to his back after missing with a knee strike. Radach capitalized by dropping a thudding right hand on the Brazilian’s chin, then a pair of follow-up rights that knocked out Rua at 2:31.

With the win, Radach (19-4) improved his status in the EliteXC middleweight division, which Rua, who fell to 16-9-1, once ruled.

Joe Hall and Loretta Hunt contributed to this report.